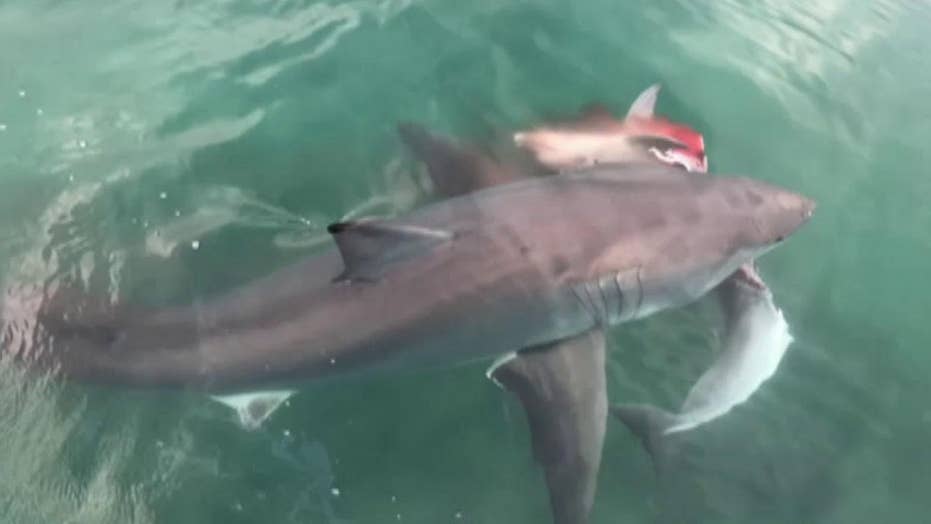 A shocking video shows a great white shark proudly carrying around its latest victim — a dolphin — when suddenly an even bigger great white swoops in to steal the meal straight from its mouth.

In a video shared by Shark Watch South Australia on Wednesday, a 12-foot great white is seen successfully taking a dead dolphin from a 10-foot shark as a group of shocked oyster farmers watch the scene unfold off the coast of Smoky Bay, Australia.

Fins can be seen splashing in the water, as if the pair were both briefly tugging at the creature, before the bigger shark swims away with the prey. Moments later, the 12-foot shark starts to devour the dolphin just feet from several fishing boats.

"The incident involving two great white sharks ended in fatal circumstances for a dolphin which was attacked and then once killed the devoured carcass dragged away in front of their boat," the group, which aims to educate the public about sharks by sharing real-time alerts on social media, explained in the video caption.

The video garnered more than 135,000 views as of Friday afternoon, with more than 1,000 commenting on the savage fight.

"Well that 'ole wives tale has been sorted. Dolphins will not protect you from sharks except in the movies," one Facebook user commented.

"Omg I was always told where there is dolphins sharks won’t be near never believing that again," another added.

"Looks like a young/baby dolphin.... Sharks might've got it on its own,away from the pod.....poor thing.. Thats nature tho, sharks gotta eat to," one user chimed in.

Oyster farmer Jason Darke said his nephew took the footage, which he then shared with the shark-watching group. Darke described the recent oyster farming trip as the "best craziest morning ever."

"A smaller great white made the kill then a bigger great white come [sic] from no where and stole it from his mouth," he explained. "Just to clarify, no we didn’t try touch it or catch it."

"A great white makes off with its catch just moments after a brutal natural predation on a dolphin. Oyster farm worker Jason Darke catches the moment it casually cruises by their boat with its carcass in its mouth," Shark Watch South Australia wrote in a follow-up video that shows a close-up of the greedy great white.

Adult great white sharks, the world’s largest predatory fish, are known to prey on large fish and marine mammals. These typically include seals and sea lions, in addition to scavenging on whale carcasses and other injured animals, according to the U.S. National Park Service.