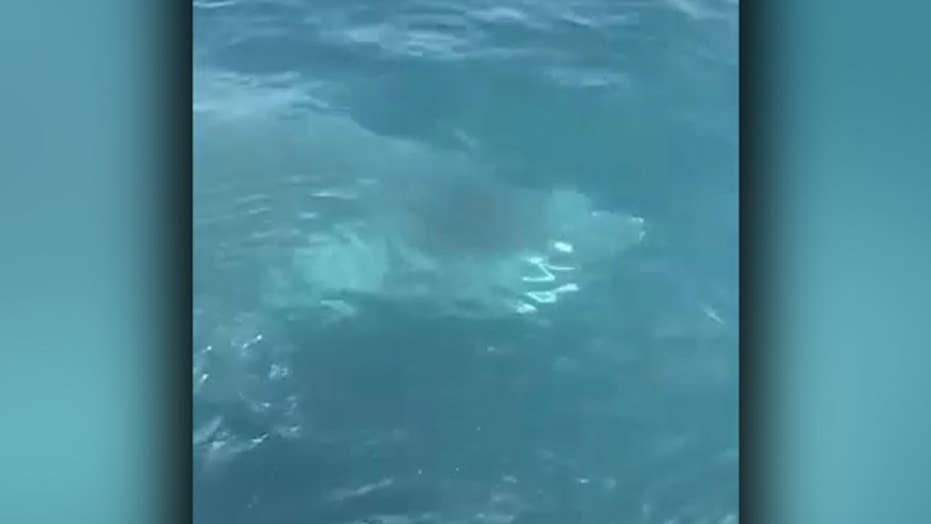 A U.S. Coast Guard crew had a close encounter with a massive shark this week as it was returning from a search and rescue mission off the coast of Boothbay Harbor in Maine.

"While returning from a search and rescue case offshore, the crew of the 47’ MLB encountered a shark crossing its bow," the U.S. Coast Guard station in Boothbay Harbor posted on Facebook Tuesday, along with a 20-second clip of the nearly 20-foot shark.

Chief Adam Smart told the Portland Press Herald that crew members spotted the large sea creature's shadow in the water and immediately took out their cell phones to capture footage as it swam alongside the vessel.

“The shark stayed around for a few minutes because the crew slowed the boat down. We didn’t want to hit it,” Smart told the newspaper, adding that the shark was about half the size of their boat.

The group's Facebook followers were also impressed by the shark's size.

"I think we're going to need a bigger boat!" one user commented.

"Why did I immediately start hearing the music from the movie Jaws? Sorry. Love Sharks!" another joked.

"It's real life Jaws and I am terrified," a woman echoed.

Crew members initially believed the shark was a giant great white, though marine experts later identified it as a basking shark, "which does not pose a threat to humans," the Coast Guard explained.

According to the National Oceanic and Atmospheric Administration (NOAA), basking sharks can reach up to 32 feet in length. They're known for their grayish-brown color and their unique heads, which are "nearly encircled with enormous gill slits," the NOAA says.

Smart said the basking shark followed them for a while, but took a turn once the boat started picking up speed to reach its docking station.

"Everyone on the crew was pretty excited. It is common to see whales but the shark sightings are rare for our guys," he told WCSH.

Smart told the Press Herald the crew was investigating reports of a deflated life raft in the area, which was determined to be old and of "no significance."