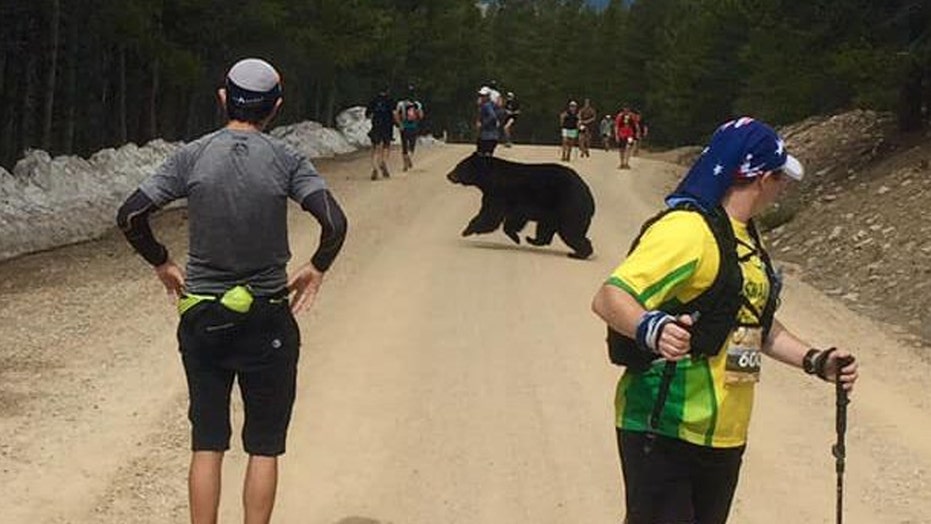 A group of runners experienced a stunning sight last weekend as a bear temporarily halted the Leadville Trail Marathon in Colorado Springs.

Two runners, Quentin Genke and Pete Peterson, said they reached the halfway point between mile 12 and 13 when Genke noticed the bear out of his right eye running along the trail.

“I don’t think [the bear] was interested in running the race,” Genke told Runner's World. “So, I reached into my pocket and grabbed my phone quick and yelled, ‘Bear!’”

BLACK BEAR FINDS ITS WAY INSIDE MONTANA HOME: 'HE WAS TIRED AND CLIMBED UP INITO THE CLOSET FOR A NAP'

He said he got the shot while keeping his distance and using his survival instincts. He was able to joke about the scary experience afterward.

Since outrunning the bear was not an option, all they could do was respect the strength and speed of the massive animal.

“We know we were in the bear’s territory,” Peterson said. “No one chased the bear or ran up to take pictures. We respected its area.”

The bear appeared for only about 15-20 seconds, as it bolted across the road, slipped through a gap in the runners and vanished into the woods.

“Everyone froze,” Peterson said. “We let the bear do what it was going to do, and it found a gap in the runners to cross and then took off into the brush. Everyone just looked at each other like, ‘Did that really just happen?’ It was so casual. That was what was funny about it. In trail races, we see wildlife all the time, but you never expect a bear to jump out in front of you when you’re in a mountain race.”

For Genke, the experience was the cherry on top of a full day that started with a Pabst Blue Ribbon (PBR) in the morning.

“Typically we get a PBR after the race or training runs, but it’s Leadville,” Genke told Runner’s World before the bear encounter. “It’s already a race on a mountain at high elevation, so it’s a crazy event to begin with. This just adds to the insanity of the day.”

Here are some bear safety tips from the Colorado Parks and Wildlife in case of any close encounters with the animal.