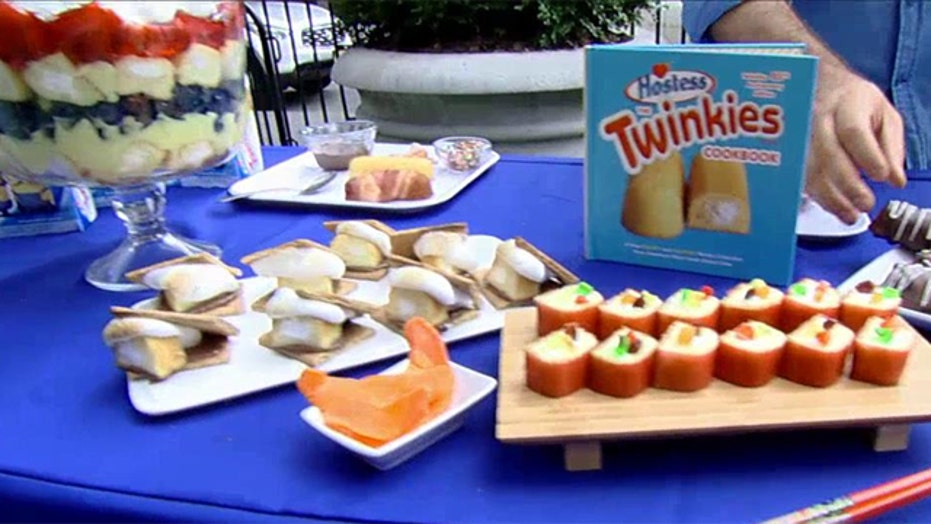 Craziest creations from 'The Twinkies Cookbook'

Hostess fans will soon be able to get their hands on three new ice cream flavors inspired by the brand's most popular snack cakes.

Twinkies and Sno Balls flavored ice creams have been spotted in a freezer case at Riesbeck’s grocery stores, a regional chain with locations in Ohio and West Virginia.

The Twinkies flavor starts with a buttercream ice cream base, sponge cake pieces and a vanilla frosting swirl.

If chocolate is more your speed, then Hostess has you covered. Additional ice cream flavors include SnoBalls-- the cream-filled cakes with marshmallow and coconut frosting-- and CupCake--cream-filled cake with the famous squiggly line.

According to a December press release, Hostess wasn’t going to start selling the ice cream until mid-February. But consumers are already spotting the items ahead of schedule in the frozen food aisle, reports The Impulsive Buy.

The unique treat, produced with Nestle, is also supposed to be available in Dollar General stores and convenience stores (based on the stores' own schedules), according to CSP Magazine.

Last August, the company unveiled pre-packed deep-fried Twinkies. That product is dipped in funnel cake batter and flash fried before being frozen. They can then be heated up in a toaster or regular oven within a few minutes for a toasty, Twinkie treat.

Twinkies fans won't have long to catch a frozen version of their favorite packaged snack cake. The new Hostess ice creams will only be in stores for a limited run through May.