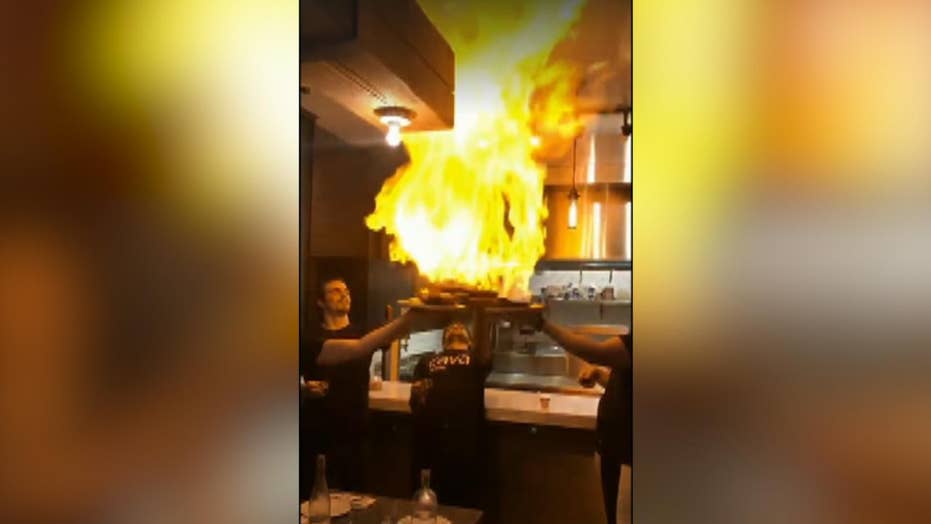 Dinner and a show!

A fiery dish served at Cava Mezze in Baltimore accidentally set off the restaurant’s sprinkler system on Tuesday, soaking down the dining area and nearly knocking the waitstaff off their feet.

The waiters were serving up flaming plates of saganaki when the sprinkler system kicked in. (James Hughes)

James Hughes, who shared footage of the hilarious moment to Facebook, said he and a large group of co-workers were finishing off their meal at the Greek restaurant when they were offered a few final orders of saganaki, a fried cheese dish which the staff flambees tableside.

Four waiters then gather and ignite the dishes, only for the sprinklers to forcefully douse out the flames while the dining room erupts in riotous laughter around them.

The large group of diners couldn't stop laughing after watching the sprinklers soak down the waitstaff. (James Hughes)

"We were enjoying a nice corporate outing when the waiters let us know they had a surprise for us. Next thing you know, it’s raining in the restaurant and the table is dying of laughter," Hughes tells Fox News.

"We got out of there as fast as we could to avoid any water damage to our belongings!" he added.

Despite the fiery fiasco, the restaurant appears to have a good sense of humor about the mishap. In response to a Twitter post containing footage from Tuesday night, Cava Mezze shared a shoulder-shrugging emoji along with a message simply reading “the sprinkler system works.”