From their humble beginnings in the Northeast to wrestling under the bright lights for WWE, Eric Arndt and William Morrissey's story is one that runs the gamut from the pinnacle of professional wrestling to rock bottom. But both stars have lived to tell the tale, and through the power of positivity and faith, the duo are on a mission to reclaim their glory amid trials and tribulations including injuries, infighting and a harrowing sexual assault allegation.

With their impeccable chemistry and blistering remarks on the mic, Arndt and Morrissey quickly established themselves as a top tag team in the WWE.

Hailing from New Jersey and New York respectively, both Arndt and Morrissey displayed a hardened athletic prowess that caught the eyes of WWE recruits. Arndt, the tough-as-nails resident of DeFranco’s Gym, and Morrissey, the 7-foot tall college basketball star, made for the perfect tag team inside the squared circle with their unique aesthetic.

Blending their flair for the dramatics with their athletic talents, the pair immediately captured the hearts of the WWE Universe.

“For six years, me and Cass wrote promos without cursing, without eliciting a cheap pop, getting people to recite things with us. That was never ever done before. I already proved to myself I could do that. That's easy,” said Arndt.

Throughout their time in NXT and WWE, the duo was unsuccessful in attaining tag team championship gold, but always managed to remain a popular act in the company. The team even got to share the ring with veterans like Kevin Owens, Chris Jericho and the Hardy Boyz, and to team up with John Cena to take on AJ Styles and the Club.

Eventually, the team had a legitimate falling out and, after a knee injury befell Morrissey, Arndt was left to fend for himself. “We had a falling out. I didn’t care if he was dead,” said Morrissey stoically.

Upon going solo, Arndt won his first title in WWE, the Cruiserweight Championship. The downfall of Arndt began amid his title reign, when he was accused of sexual assault in January 2018, at the height of the #MeToo movement.

“When everything happened with him… I knew that it was bulls—t,” Morrissey stated in defense of his friend.

WWE quickly suspended Arndt for allegedly violating their zero tolerance policy on sexual assault and harassment. Eventually they fired the champion, effectively vacating the Cruiserweight Championship. Within a matter of days, Arndt’s dream job was taken away and he entered career purgatory.

WWE SUPERSTAR 'THE BIG SHOW' PAUL WIGHT GETS HIS OWN SITCOM

“The news that I got let go by the WWE came as a real hit to me as a human. I felt like I put a good effort forth for six years to prove to a company that had the trust in me to hand me a microphone every night. That's the lifeblood of our company,” Arndt solemnly reflected.

“In that moment I was angry," he added. "I was as angry as I'd ever been. But that subsided and in time I think that the thing that got me the most was the disappointment of the people that I potentially let down.”

After a five-month hiatus on social media, Arndt was cleared by the Phoenix Police Department, citing insufficient evidence to support the accuser’s claims. Arndt quickly reemerged with a newfound career in music — he released the controversial “Phoenix,” which addressed the sexual assault allegations. Coinciding with the start of his rap career was the bombshell announcement that Arndt was retiring from professional wrestling.

“When your body gives out, when you get a concussion and you get knocked out cold in a ring, you better have a backup plan and mine has always been Plan A — music,” Arndt admitted. “Plan B was wrestling. Plan B is just another way to make Plan A work.”

While Arndt’s WWE career came to an end, Morrissey returned from injury and feuded with one of WWE’s most popular stars, Daniel Bryan, who had recently returned from a two-year retirement. Although Morrissey was prominently featured on television, he suffered a handful of losses to fan favorite Bryan.

Morrissey was released by WWE in June 2018 for alleged personal conduct issues including public intoxication, according to Sports Illustrated.

“[The firing] didn’t come as a shock to me. I was pretty out of control for a few months,” Morrissey admitted. "The night after 'Money in the Bank,' I had main-evented the house show with Daniel Bryan. When I came back from the match, I was told, 'You have a meeting with Vince [McMahon] tomorrow at noon at the building,' and I knew it right then and there what was going to go down.”

“We chatted for about an hour. It was a really good talk. And that was the end of my tenure with WWE," he recalled. "Before I left the room Vince looked me in the eye and he said, 'You walk out of this building with your head held high. You did nothing wrong.' So it's exactly what I did. It was unfortunate but I was just not in a good place and I had changed as a human being.”

Upon release from WWE, Morrissey returned to the ring, wrestling for smaller independent companies. Plagued with anxiety, depression and physical ailments at the time, CaZXL’s health issues climaxed when he suffered a seizure while working for a small independent company in Philadelphia.

“The amount of alcohol I was drinking every day should have killed me… I was drinking to a point where I should be dead and I was told that in a Philadelphia hospital,” Morrissey admitted.

“At this point I had been drinking every day for six months. Heavily … enough to kill me. So I was withdrawing pretty bad from alcohol that whole day … I didn't know anything about the subject; I didn't know how dangerous alcohol withdrawal could be. So I dropped and had a seizure in the middle of 1,500 people.”

The seizure proved to be the major turning point in Morrissey’s career. Reinvigorated with a passion for life and professional wrestling, Morrissey did away with the unhealthy habits and took up a serious regimen of DDP Yoga — a workout regimen created by former professional wrestler Diamond Dallas Page. 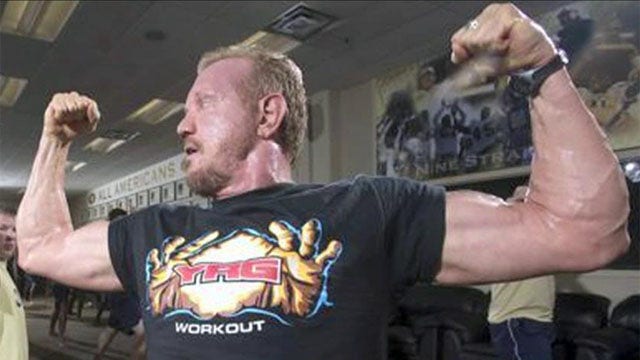 Speaking on his depression, Morrissey encouraged those suffering to seek help. “Don't bottle it down. Go see a psychiatrist, go talk to somebody about it. Don't keep it to yourself. The worst thing you could do," he advised. "It's going to end in disaster … Take the right steps to get better — whatever it is, medication, talk therapy, whatever you need to do. Do it because if you let this keep going on, it's going to end in an absolute disaster.”

“I wouldn't say that I'm a churchgoer by any means. I'm not in church every Sunday but I pray and I feel like when I pray I get a chance to talk with God," Morrissey said. "I feel like God watches over me and like I said with the seizure, I could have died but instead it was a warning.” “I count that as a blessing,” he added.

IS JOHN CENA RETIRING FROM WWE?

With a rebuilt mind, body and soul, Morrissey returned to the ring in April 2019. Sporting a much more lean and impressive physique, the 7-feet giant came back stronger than ever, devoting himself to becoming the best wrestler he can possibly be.

William Morrissey, then known as Big Cass, attends the Buffalo Bills at New York Jets game at MetLife Stadium on Nov. 2, 2017 in East Rutherford, New Jersey. Morrisey urges those who are struggling with mental health to get help. (Getty)

In the same month, Arndt and Morrissey, rechristened under the names nZo and CaZXL respectively, reunited and sent shockwaves through the wrestling world when they appeared at the G1 Supercard event at Madison Square Garden in a seemingly unscripted appearance. The appearance foreshadowed Arndt and Morrissey's big comeback.

Arndt and Morrissey are slated to appear this Friday at Northeast Wrestling’s “Prison Break” event, marking Arndt’s long-awaited return after nearly 18 months out of the squared circle. “Prison Break” will take place the Mid Hudson Civic Center in Poughkeepsie, N.Y. — the same arena Arndt had his final match for WWE. The event also features a plethora of former WWE talent, including the red-hot Jon Moxley (formerly known as Dean Ambrose) and up-and-coming stars like Brian Pillman Jr. and All Elite Wrestling’s Darby Allin.

When asked about a second chance, Morrissey expressed utmost gratitude for Northeast Wrestling promoter, Michael Lombardi. “A lot of people out there had written me off and nobody wanted to give me a chance," Morrissey said. "Michael Lombardi had some faith in me … He gave me the opportunity to wrestle Jon Moxley on a show in New Jersey, and that’s where things started to turn around for me and [Arndt] because we represented ourselves really well.”

As for the advice he'd give his past self, Morrissey said simply, “I'd just tell myself keep doing what you're doing, because everything that's happened to me since the beginning of whenever I started wrestling, it's all happened for a reason and I'm here today talking about what I'm talking about. I feel like that was God’s plan.”

Northeast Wrestling’s “Prison Break” airs Friday at 8 p.m. EST and will be streamed live at HighspotsWrestlingNetwork.com.

Northeast Wrestling will continue their weekend with the “Wrestling Under the Stars Tour,” featuring stars like Mick Foley, Jon Moxley, Jerry “The King” Lawler, nZo and CaZXL. The mini-tour begins at the Senator Thomas J Dodd Memorial Stadium in Norwich, Conn., on Saturday and concludes at PNC Field in Moosic, Pa., on Sunday.

Tickets are available at NortheastWrestling.com.