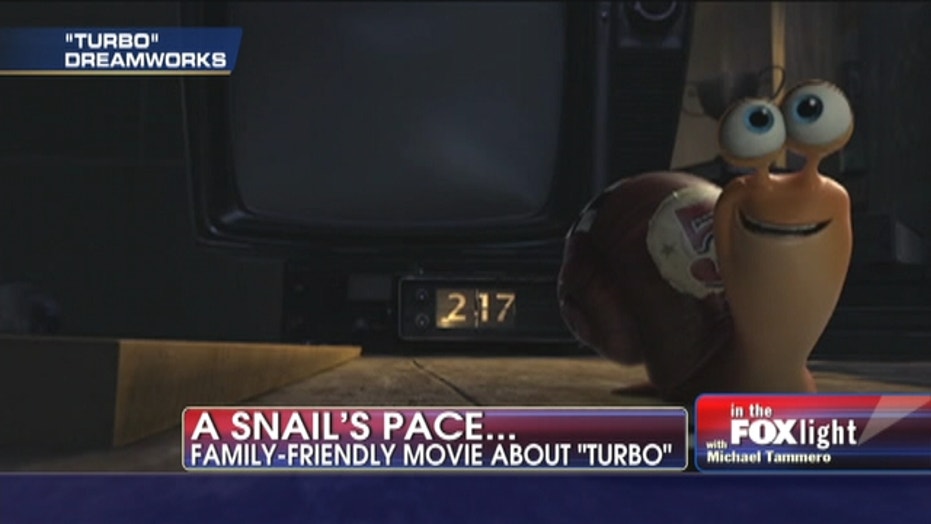 'Turbo,' The Snail Wants To Be Faster

There is certainly no shortage of animated films to choose from this summer and “Turbo,” the sweet and unassuming little flick from Dreamworks Animation about a slow snail with roaring ambitions, slides – or oozes – into the mix beside “Monsters University” and “Despicable Me 2.”

Ryan Reynolds voices Turbo, a race car-obsessed snail, whose passion for speed warps his at-home duties, putting the little snail-who-could on the outs with his snail clan. After Turbo is cast out of his village for daydreaming and slacking in his daily snail chores, he is accidentally zapped by a hot rod’s turbo booster, thus injecting him with super powered speed. When taco vendor brothers Tito (Michael Peña) and Angelo (Luis Guzmán) snatch the newly charged Turbo from the street, Tito sees the speedy snail as their ticket to fame and fortune.

Tito, like Turbo, is also a dreamer with big ambitions and is no stranger to creating wild plans to save his local struggling small business community. Tito convinces the local businesses to front some cash so Turbo can enter the Indy 500. If Turbo wins, their businesses will become popular and financially stable. So off they go to the Indy 500 to save their lot and for Turbo to prove to the snail world that he’s a winner, whether they accept him or not.

Accompanying Turbo is a team of snails, the usual bunch of goofy weirdos prevalent in every animated ensemble. The best is White Shadow (Mike Bell), a fat slug whose only recurring line is “White Shadow” as he slips into darkness. Then there’s Samuel L. Jackson’s super-cool Whiplash, the leader of this band of snail misfits. Snoop Dogg, Maya Rudolph and Ben Schwartz round out the snail team.

Borrowing all the successful ingredients from “Finding Nemo” and “Cars,” “Turbo” will delight kids with the fast cars and silly characters, as well as the charming story of a starry-eyed outcast looking to make it in a world that isn’t quite able to accept him. The heart of the film lies in Turbo’s relationship with his doting brother Chet (Paul Giamatti), who is reluctant to believe that Turbo can succeed. It’s Chet who is the anchor of the story and makes the biggest journey, and Giamatti is such a pro that it’s hard not to smile at his character’s innocent and charming cynicism.

As expected from Dreamworks, the animation is exquisite, especially the character’s eyes and identical mannerisms to the actors voicing them. Though the plot of a snail racing in the Indy 500 is remarkably silly, the silly characters are the heart and center of the film and kids will most likely be racing out for their very own “Turbo” action figures.