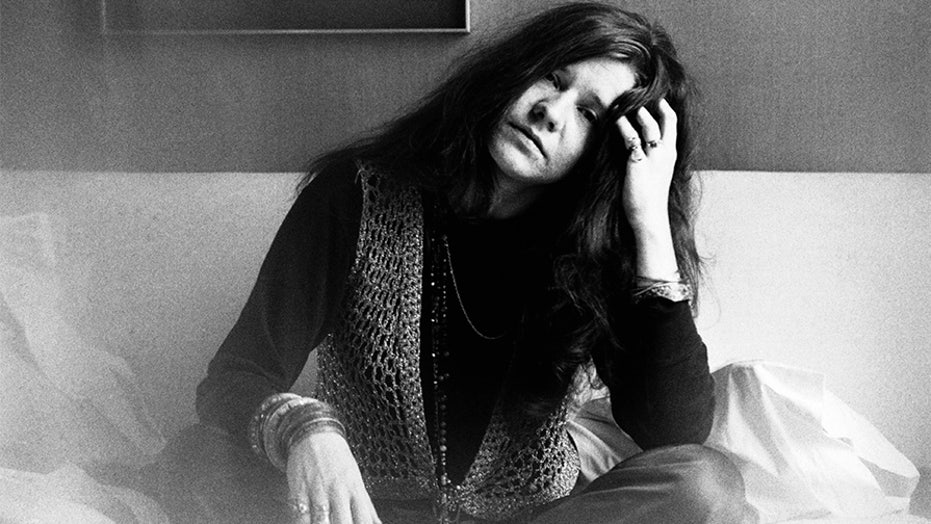 The soulful singer joined the so-called 27 Club -- a group of popular musicians who all died at age 27 -- in 1970 due to a heroin overdose in Hollywood. The Texan, who yearned to “get stoned, stay happy and have a good time,” was haunted by self-doubt and insecurities, despite her fame as a sought-after rock star.

“It was just a tragic accident,” author Holly George-Warren told Fox News. “She went into the studio that day — she loved working in the studio. She had a great relationship with her band — her final band. They got along wonderfully and she was really happy with the way the sessions were going. They had a routine that after being in the studio, they would go to Barney’s Beanery for a few drinks and some laughs.

“She had a couple of screwdrivers,” George-Warren continued. “After a busy, crazy day, she went to her hotel room and she found herself all alone. She had a guy in her life at that point and a woman. Neither of them showed up that night. They were supposed to and neither one of them did. And so that’s when she ended up doing heroin.

“It turned out to be super strong stuff that was so much purer than what she was used to. And she had stopped using four, five months before. Her tolerance was down. It was just a tragic mistake. She was so excited about how the sessions were going and so eager for the future.”

The Queen of Psychedelic Soul was found dead in the Landmark Motel in Los Angeles. Her body was found by her road manager John Cooke, who wondered why Joplin had not emerged from her hotel, the New York Times reported.

“What’s really tragic is that there was one guy in her life who really loved her,” George-Warren shared. “He was off traveling the world and she had been really wanting to be with him. She didn’t realize it, but there was a letter waiting for her in the mailbox at the hotel where she was staying. She never got to see that letter.”

George-Warren, an award-winning writer and music consultant, recently wrote the biography “Janis: Her Life and Music.” For the book, she tracked down those who befriended the rock icon over the years, as well as her siblings and David Niehaus, the Peace Corps worker who wrote that letter to his love.

George-Warren shared that, despite Joplin’s fame and fortune, the sensitive artist was plagued with self-doubt about her body image, which originated in childhood. In school, Joplin was voted “Ugliest Man on Campus" and posters with her face were slapped on everywhere. A football player even nicknamed her “Beat Weeds,” a reference to pubic hair. Jocks threw pennies at her and taunted the singer with words like "slut" and "whore." The brutal words left an unforgettable impression.

“She wanted to look different, be different,” explained George-Warren. “As a senior in high school, she was bullied for the kinds of clothes she was wearing … But that yearning to be different never left her. She would go on to create these wild, over the top outfits just so she can look really cool and special on stage. But even with her talent, the press still focused on her features, and what they wrote was horrible. I’m sure it was painful to relive those feelings again when all she wanted to do was sing.”

But even as Joplin became a superstar, the criticism was far from over. George-Warren pointed out reporters constantly commented on her weight and appearance, including her acne. At one point, Rolling Stone coined her “an imperious whore.” There was even a run-in with Jerry Lee Lewis where the rocker, nicknamed "The Killer," allegedly punched Joplin and said, “If you’re gonna act like a man, I’ll treat you like one.”

“The stuff that you would read about her was horrible,” said George-Warren. “And I think that criticism gave into her low self-esteem. But she also tried to take advantage of all the many pleasures that came her way. But it was no different from what the guys were doing… But she did have some anger and resentment about how she was treated in high school … And there was all this pressure and tension she endured about making it on her own.”

But Joplin made sure she had a good time during her rise to stardom. According to the New York Times, she "took in men and women the way most people take in the morning newspaper." Joplin bedded sailors, fans and members of the Hells Angels. She allegedly drove into Mexico for an abortion. When it came to musicians, she reportedly had relationships with Ron “Pigpen” McKernan of the Grateful Dead, Country Joe McDonald, Leonard Cohen and Kris Kristofferson. George-Warren hinted Joplin also had encounters with Jim Morrison (whom she later loathed) and Jimi Hendrix.

But addiction had an undeniable grip on Joplin. The New York Times noted that heroin was the way Joplin, who “never seemed to be able to control" her feelings, found a sense of peace.

Still, George-Warren stressed that Joplin was far from a victim. Not only did she crash an all-boys club to become a rock star, but she did it on her terms. She also became one of the most influential artists in American music, all before turning 30.

“Because she had this tragic death from a drug overdose at age 27, people still see Joplin as a victim,” George-Warren explained. “I really don’t agree with that assessment. I think she was a fearless woman who took the bull by the horns. She knew the risks. She knew what she was doing … Sadly she did it make it, like many other musicians from her lifetime. She dabbled in drugs and drank too much.”

“Her death was a horrible accident, but I don’t think she was a victim,” George-Warren continued. “She wanted to be a major rock star. And she really was the first woman to be such a gigantic star. And even with all the criticism she received over her looks, there was no denying her talent. I think she would have gone on to do all kinds of music and even producing. Sadly we didn’t get to see her further develop as an artist. But she did exactly what she wanted to do.”