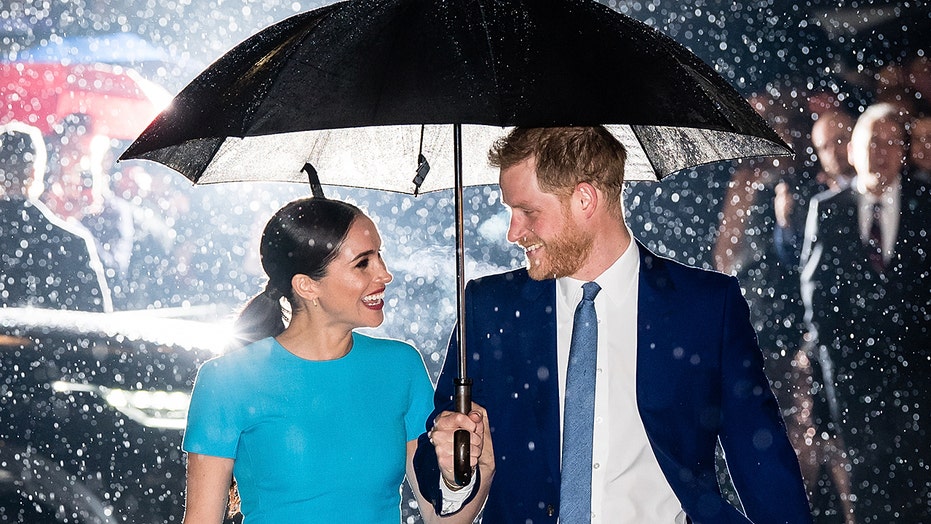 Prince Harry became so captivated by American actress Meghan Markle that he didn’t hesitate to drop the L-word just three months into their whirlwind romance.

The claim is made in the upcoming bombshell book “Finding Freedom,” written by royal reporters Omid Scobie and Carolyn Durand. Numerous palace insiders came forward to the two journalists and detailed what led to the Duke and Duchess of Sussex’s departure as senior members of the British royal family.

On Monday, the U.K.’s Daily Mail reported that an excerpt from the book revealed the British prince left his first date at Dean Street Townhouse with the former “Suits” star in a “trance.” Markle, 38, later told friends “this could have legs.”

Markle, a divorcee, allegedly told a pal that she’d be happy for “a nice English gentleman to flirt with” before embarking on that fateful trip to London where she met Harry.

PRINCE HARRY 'HAD FALLOUTS WITH HIS OWN CIRCLE' OVER MEGHAN MARKLE 'PREJUDICE,' BOOK CLAIMS

Meanwhile, Harry told friends after their hours-long date that Markle was “ticking every box.”

According to the outlet, Markle was secretly taken to Kensington Palace just one night after date number two, where Harry attempted to “impress her with tales about his work and life,” which he described as a “little mad.”

Six weeks later, Harry told Markle he wanted to take her on a trip and asked her to fly to London.

The outlet claimed Markle flew in from Toronto and spent a night with Harry at Kensington Palace before the pair jetted off to Botswana.

“She came back smiling and just completely spellbound,” one friend remarked.

“By then, they were each already dancing around the idea that this just may be a forever thing,” chimed another friend.

Harry also embarked on commercial flights to Toronto where he would spend time with the actress.

And three months into their courtship, Harry told Markle “I love you.”

According to the book, Harry was informed by a palace aide during a trip to Toronto that a tabloid was gearing up to reveal his secret relationship with Markle. Several aides from the palace urged the prince to come home, pointing out his minimal security. However, he allegedly refused.

Markle was allegedly disappointed the relationship was leaked by the press but also was “relieved not to have to keep lying to friends about her trips to London.” It is said that while Harry warned Markle word would get out, she was still surprised by the intense media scrutiny.

According to the book, a photographer waited for Markle by her car. She spotted him and called the police. “This is how it’s always going to be, isn’t it?” she then told a friend.

MEGHAN MARKLE HAS FREEDOM TO SPEAK ‘FROM THE HEART,’ ISN’T BOUND BY ‘CONSTRAINTS’ OF ROYAL LIFE: AUTHOR

“The Duke and Duchess of Sussex were not interviewed and did not contribute to ‘Finding Freedom,’” reps said in a statement. “This book is based on the authors’ own experiences as members of the royal press corps and their own independent reporting.”

“The aim of this book is to portray the real Harry and Meghan, a couple who continue to inspire many around the world through their humanitarian and charitable work but are often inaccurately portrayed," the statement said. "Our mission has been motivated by a desire to tell an accurate version of their journey and finally present the truth of misreported stories that have become gospel simply because of the amount of times they have been repeated. It is thanks to our sources that we have been able to share the definitive story of the Duke and Duchess of Sussex."