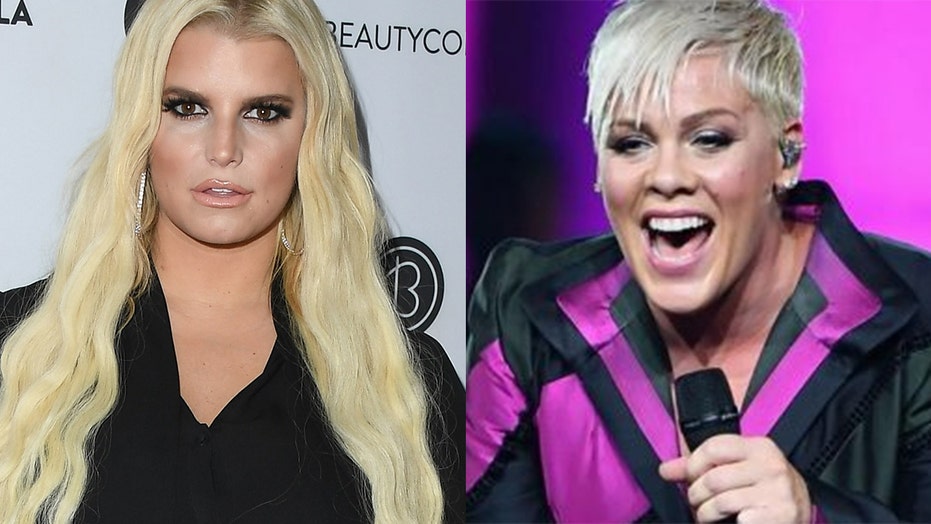 Pink is showing her support for Jessica Simpson after the fashion designer was mom-shamed for dyeing her 7-year-old daughter's hair.

Simpson, 39, posted a photo of her daughter Maxwell after a trip to the salon. In the photo, the ends of Maxwell's hair were dyed different shades of purple.

Immediately, fans took to the comments section to share their unsolicited opinions over Maxwell's new hairdo.

"So young its a shame," one user wrote. Another said, "Isn’t she too young to have her hair dyed?"

In response to the backlash, Pink posted a picture of herself dyeing her 8-year-old daughter's hair blue.

JESSICA SIMPSON SAYS HAVING 3 YOUNG CHILDREN IS 'NO JOKE'

"I heard people were bummed on Jessica Simpson for letting her seven-year-old get her hair colored," Pink wrote on Instagram on Thursday. "So we thought we’d share what we did yesterday."

She added the hashtags, "bluehairdon’tcare" and "getyourownkids," in addition to turning comments off on the post.

The "Raise Your Glass" singer is no stranger to being a for criticism on social media, with both her and husband Carey Hart being on the receiving end of numerous comments judging the couple on their parenting. One such instance occurred earlier this year when the star posted an image of her two children looking at a pelican, with her 2-year-old son, Jameson, missing a diaper.

In an appearance on "The Ellen DeGeneres Show" in April, Pink described how the negative reactions to her posts affected her emotionally, claiming they left her in tears. She also vowed to cut back on how much she shares about her family on social media as a whole.

"People went as far as saying, 'Someone should call Child Services,' because he didn't have a diaper on, and 'How dare I?' — just some of the nastiest things," the singer told Ellen. "I cried so hard after that because I like to share my family. ... I'm prouder of my kids than anything I've ever done and I just won't share them anymore. I won't do it."