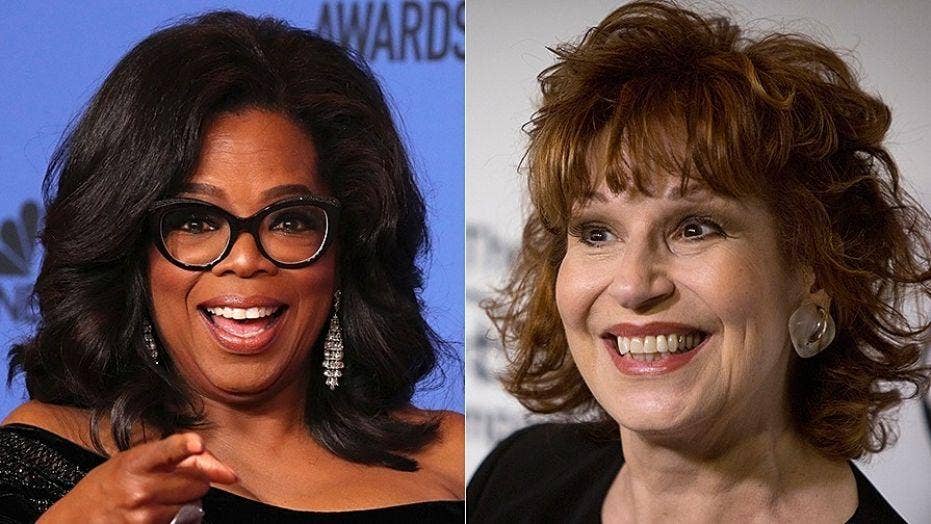 Oprah Winfrey told “60 Minutes” she will not run for president in 2020 saying God hasn’t told her to run. Will Joy Behar and other hosts of “The View” mock Oprah's faith as they recently did with Vice President Mike Pence?

ABC News' Joy Behar, co-host of "The View," came under fire this week for saying Vice President Mike Pence has a “mental illness” because he listens to Jesus – but it’s safe to assume she won’t have the same criticism of liberal hero Oprah Winfrey.

Winfrey told CBS’ “60 Minutes Overtime” that God has not told her to run for president despite widespread speculation that her infamous Golden Globes speech was a preview of a potential 2020 matchup with President Trump.

Winfrey told “Overtime” that she was simply looking to give a good speech at the Globes and that God would make the decision if she decided to run for office.

“If God actually wanted me to run, wouldn't God kinda tell me? And I haven't heard that," Winfrey said.

Behar, an outspoken liberal, mocked Pence after hearing that he allegedly takes direction from Jesus.

“It’s one thing to talk to Jesus. It’s another thing when Jesus talks to you… that’s called mental illness,” Behar said on Tuesday. The women of “The View” addressed the controversy on Thursday and Behar didn’t exactly apologize.

“I don’t mean to offend people but apparently I keep doing it,” she said. “It was a joke.”

Media Research Center Vice President Dan Gainor told Fox News that “liberals think it's OK to make fun of Christians as long as it's ‘conservative’ Christians,” but they typically backpedal when called out on it.

“They turn around and claim it was a joke, as Joy Behar did,” Gainor said. “They think ‘liberal’ Christians like Oprah basically are 'anything-goes' and that is what the media thinks religion should be. Sin isn't bad, they argue. Believing in sin is.”

Behar came under fire for mocking Pence’s religious views and the Media Research Center emailed supporters on Thursday morning with a message titled, “Don't let ABC get away with this.”

The email reiterated the offensive comments made by Behar and co-host Sunny Hostin, stating, “We need to stand up against these bullies and bigots and let them know that we will not stand for such disgraceful and prejudiced behavior.”

The comments also resulted in media experts calling for ABC to pull “The View” from the network’s news division, which claims to be an unbiased broadcast operation but typically allows four outspoken liberal panelists to team up against one “token” conservative.

Meanwhile, God may not have encouraged Oprah to run for office yet, the liberal elite seem to tingle at the thought.

"I had a lot of wealthy men calling, telling me that they would run my campaign and raise $1 billion for me," Winfrey said. "I think that when you have that many people whose opinions you value coming at you, it's worthy of thinking about."

“Look at what Oprah said exactly: If God wanted her to run, he would have told her. That's precisely the attitude ‘The View’ mocked referring to Vice President Mike Pence. But Oprah is on the left-wing team, so there's no controversy,” Gainor said.