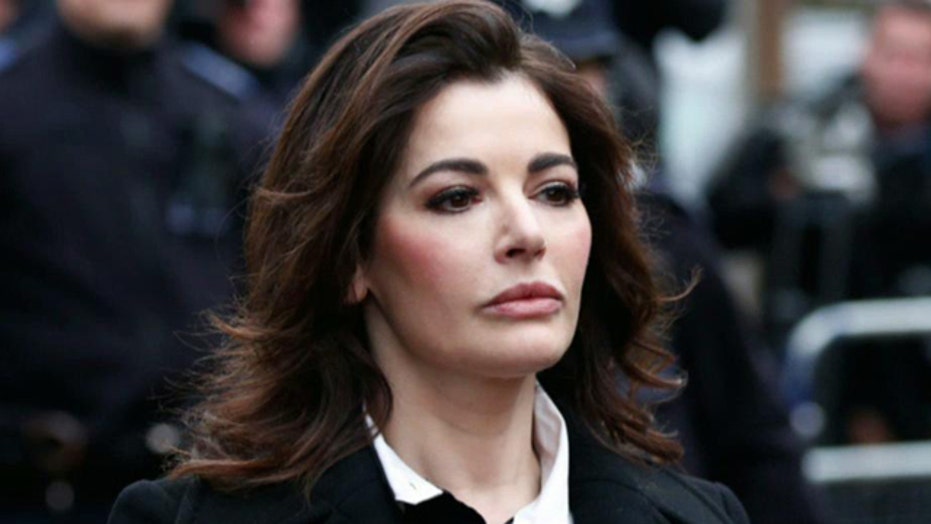 Celebrity chef Nigella Lawson admitted Wednesday in a U.K. court that she had taken cocaine a handful of times. But she denied habitually using illegal drugs and accused her ex-husband of spreading that allegation to savage her reputation.

Lawson said ex-husband Charles Saatchi, a wealthy art dealer and advertising mogul, had threatened to destroy her if she did not clear his name after he was photographed gripping her throat outside Scott's restaurant in London, a widely published image that was soon followed by a divorce.

"He told everyone that he was taking cocaine out of my nose at Scott's when he knows that is a lie," Lawson said, testifying at the trial of two former assistants accused of fraudulently using the couple's credit cards.

Lawson, 53, appeared as a prosecution witness at the fraud trial of Elisabetta and Francesca Grillo, longtime employees who worked as nannies, cleaners and assistants in the couple's home.

Coverage of the trial has focused more on the couple's failed 10-year marriage and their tempestuous home life than on allegations that two women working for them were living the high life at the couple's unknowing expense. Defense lawyers for the employees have suggested that Lawson ignored the Grillos' lavish expenditures in return for their silence about her drug use.

Known for her sensuous TV manner and "domestic goddess" image, Lawson said Saatchi had spread "false allegations that I was a habitual user and drug addict" who snorted cocaine daily.

Lawson said she taken cocaine half a dozen times with her first husband, John Diamond, while he was dying of cancer. And she took it once again in July 2010 at a time when "I felt subjected to acts of intimate terrorism" by Saatchi.

"A friend of mine offered me some cocaine and I took it," she said. "It completely spooked me."

Lawson also said she had "smoked the odd joint" starting in the last year of her marriage to Saatchi.

She said she had been reluctant to testify in court because she had already been subjected to a campaign of "bullying and abuse" from Saatchi, whom she divorced in July following the throat-grabbing incident.

"He said to me at the start that if I didn't go back to him and clear his name he would destroy me," Lawson said.

"He started spreading false allegations of drug use," she added. "I have been put on trial here ... and in the world's press."

The Grillos — sisters from Calabria in southern Italy — are accused of using credit cards loaned to them by Lawson and Saatchi for household expenses and then more than $1 million on luxury clothes, accessories and visits to high-end hotels.

Lawson told a jury at Isleworth Crown Court in London that Elisabetta Grillo had been "a rock" who helped her overcome the trauma of her first husband's death in 2001. But she said the 41-year-old Grillo — known to the family as Lisa — has left her family feeling betrayed.

"I loved Lisa. My children loved Lisa," said Lawson, who had showered Grillo with gifts, including a 7,000-pound set of false teeth. But she said her employee's behavior became increasingly bitter and unkind to Lawson's children.

Lawson was read a list of expenditures by the Grillos, including nights at luxury hotels and purchases from Yves St Laurent, Dolce & Gabbana and Chanel. She denied authorizing them.

"It's very difficult when you find out that someone you have loved and trusted could behave in that way," Lawson said, her voice breaking. "In my heart of hearts I do not believe Lisa to be a bad person. But I believe her to have not a very strong moral compass."

Lawson appeared composed but tense as she was questioned about her marriage in often testy exchanges with defense lawyer Anthony Metzer.

"I don't see why my marriage is pertinent to you," she snapped.

She said she had treated the Grillos like family, but disputed the lawyer's claim that Elisabetta Grillo was a surrogate mother to her two children.

"My children do not need a surrogate mother," she said.