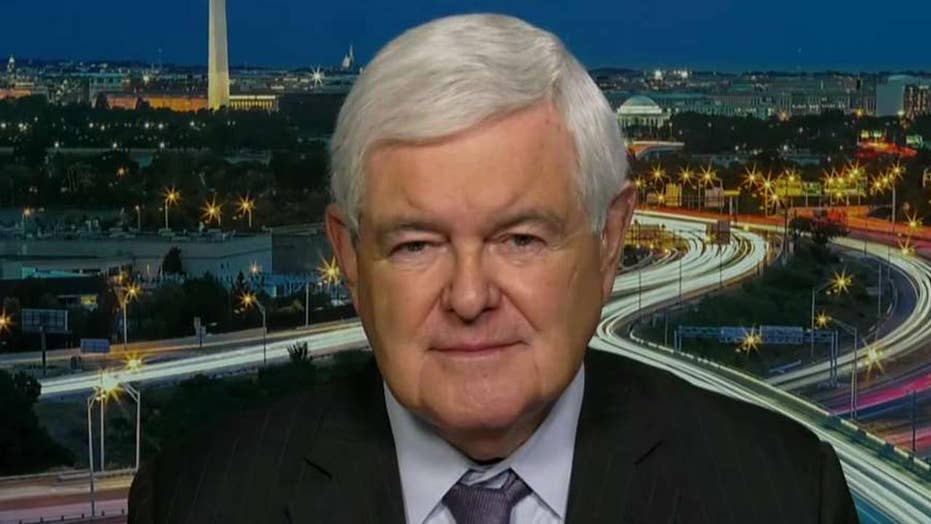 Gingrich: There's a deep anti-Israel, anti-Semitic bias on the left

Former House Speaker Newt Gingrich believes the Democrats' expanded investigations into President Trump represent the most  "vicious character assassination" on a commander-in-chief since the Civil War.

“They’re basically saying, 'If you worked for Donald Trump as a private citizen, we’re going to try to destroy you. We’re going to make you hire lawyers, we’re going to make you go through public humiliation',” Gingrich said on Fox News' “Hannity.” “I mean, these are normal, everyday folks, who are not in the political arena, they’re getting called in front of some of these committees, and the most radical, vicious, nasty liberal Democrats are going to feel like they have a right to beat them up, to humiliate them, to lecture them.”

"These are normal, everyday folks, who are not in the political arena, ... and the most radical, vicious, nasty liberal Democrats ... feel like they have a right to beat them up, to humiliate them, to lecture them.”

It's possible that more associated of President Trump could be asked to appear before committees in the Democratic-controlled House. On Monday, House Judiciary Committee Chairman Jerry Nadler, D-N.Y.,  issued requests for information from 81 people or organizations connected to the president.

“Now that they realize the only Collusion with Russia was done by Crooked Hillary Clinton & the Democrats, Nadler, Schiff and the Dem heads of the Committees have gone stone cold CRAZY. 81 letter sent to innocent people to harass them. They won’t get ANYTHING done for our Country!” the president tweeted.

Gingrich told Fox host Sean Hannity that, in his view, Nadler was being "hateful" in his actions.

“[Quentin] Tarantino wrote ‘The Hateful Six’ [sic] — he could have written ‘The Hateful Eight’ for the Democratic Committee Chairmen and made a movie out of it,” Gingrich said. “We have never seen, not since the Civil War, the kind of deliberate, vicious character assassination.”