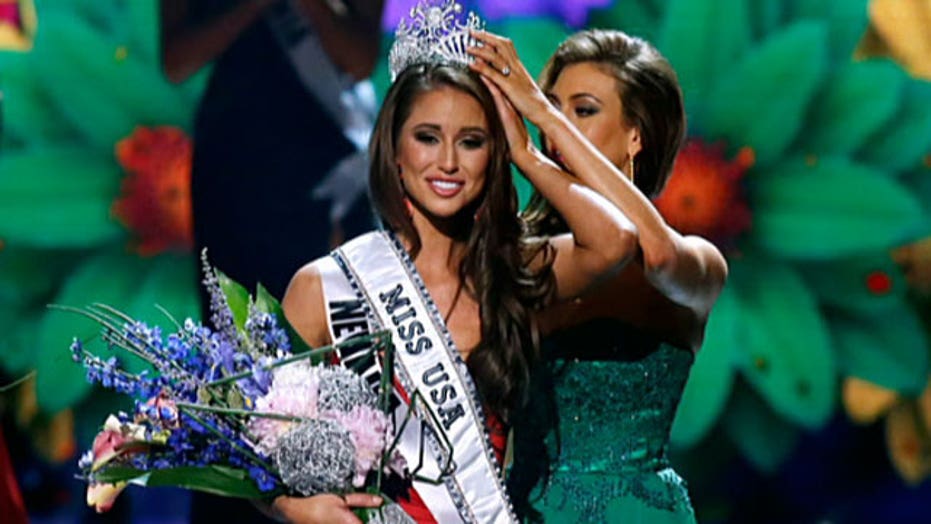 LOS ANGELES – Questions are emerging about how closely connected newly crowned Miss USA Nia Sanchez is to her “home state” of Nevada, which she represented in Sunday’s pageant.

Not only that, the source claims Sanchez only met the Nevada pageant’s minimum residency requirements in order to compete for the Miss Nevada crown, and didn’t actually live there.

“She never actually moved to Nevada, but continued to work at Disney and live in California, setting up some minimum paper trail to appear like she was in Nevada and allow her to compete,” the insider told FOX411. “Shanna Moakler is the Nevada director, and she personally coached Nia on what she needed to do to qualify in Nevada and skirt around the need to be actually from there.”

Moakler, who was Miss USA in 1995 and went on to become co-director for the Miss California pageant, became the director of the Nevada pageant in 2011.

But Sanchez told FOX411 in a one-on-one interview that there is "no truth" to the allegation Moakler helped her any more than she would help any other prospective contestant, and said she had lived in the state almost 18 months before she won the title – much longer than the minimum six months required.

"I actually had an agent that was working me in Nevada a lot so I figured why not work in that state, and then I looked into the pageant program because I had done pageants before," she explained. "So I figured why not look into the one in Nevada? I really liked the way that it was run, the director that ran it, it seemed like a really healthy, well-run state program. So I decided to go there since I was living there anyway."

Four4Four: Is a pageant carpetbagger even a thing?

The Miss Nevada USA official competition page states that contestants must provide two documents “showing that you have resided in the state in which you wish to compete for at least 6 months prior to the State pageant,” emphasizing that these must be dated at least six months ahead of the pageant and be issued in the contestant’s name.

Pageant officials did not respond to a request asking what documents Sanchez provided. But Sanchez said she did everything by the book, and more than met the residency requirements.

“I didn’t want there to be any discrepancy. I wanted to go into it properly," she said. "So I didn’t compete last year. I watched my friend Chelsea Coswell be crowned."

But some say dotting your "i's" and crossing your "t's" doesn't mean competing in a state you just moved to is right.

Sanchez listed her job on her Miss USA application as a model with the AC Model Agency, which has branches in Las Vegas and Los Angeles. However, Sanchez’s modeling profile lists her as being based in L.A., not Vegas.

The AC Model Agency did not respond to a request for comment, but Sanchez she is listed that way because Los Angeles is where the “big money” commercial jobs are, even though she got most of her modeling work in Las Vegas.

Prior to her job listing with AC Model, Sanchez listed her workplace as Disneyland in Anaheim, Calif. Indeed, it seems her work has been based primarily in California, mostly as a princess character at the theme park. A source at Disneyland said Sanchez worked at the Anaheim location from January 2011 through November 2013. She also worked at Hong Kong Disney during part of that time before returning to the states.

According to another source, several California participants – including Sanchez – crossed the state line to compete for Miss Nevada because they thought “it was easier” there. We’re told Sanchez competed against between 100-200 women in the California pageants, compared to 33 who competed for the Nevada crown in January.

Sanchez disagreed that Miss Nevada was easier to win, saying that “at least this year in Nevada, we had such strong competition. All the girls were not only beautiful, they were smart, college-educated well-rounded women…. I think it was a really tough competition.”

Sanchez graduated from California’s Paloma High School in 2008, and she notes on her personal Facebook page that she attended Mt. San Jacinto College, a community college in Riverside County, Calif. Her official Miss USA bio states that she moved between California and Washington throughout her childhood and spent time in Europe after school to work as a nanny.

It also notes that she has been working as a professional model for the past seven years, and after a visit to the Great Wall of China “made the bright lights of Las Vegas her home.” But while a WhitePages.com listing for Sanchez was found in Menifee, Calif., none could be found in Nevada.

On the day Sanchez was crowned Miss Nevada, singer Alicia Blanco, a former Miss Arizona who identifies herself as an L.A. resident, also posted a photograph of Sanchez along with the caption: “OMG MY ROOMIE JUST WON MISS NEVADA USA!”

A source connected to the Miss Universe Organization, which operates Miss USA, told FOX411 that hopefuls “move all the time” and that as long as eligibility within the bylaws is met, that is all that matters. We’re also told that if there was an incident where documents were forged, legal action would likely be taken, and that is not the case here.

Several others who have worked in the Miss USA pageant world told FOX411 it is not uncommon for hopefuls to switch states in the quest to make it to the big competition, though they questioned the ethics behind the strategy.

“Most women are really proud to represent their home state, and it starts to become unfair to the hometown contestants competing when this happens,” said Angie Meyer, a former PR representative for the Miss California pageant. “If you can’t win at home, you have no business competing elsewhere.”

Sanchez disagreed, saying it was okay as long as you followed the rules set out by the organization.

Reps for Moakler, the Miss Nevada Organization and the Donald Trump/NBC owned Miss Universe did not respond to requests for comment.

- Diana Falzone and Danielle Jones-Wesley contributed to this report.