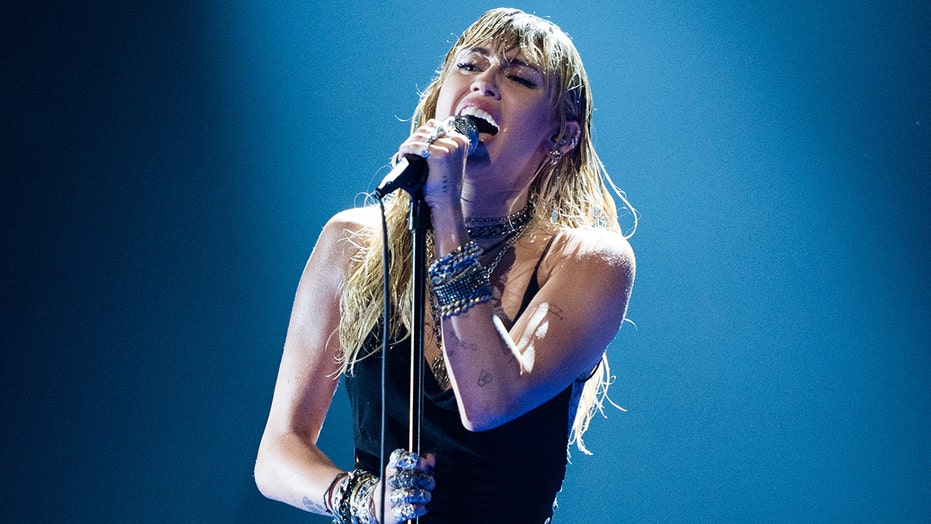 Miley Cyrus poured her heart out on the 2019 MTV Video Music Awards' stage in New Jersey Monday night — but before that, she was reportedly spotted kissing Kaitlynn Carter.

The pop star was a late addition to the VMAs lineup, delivering an emotional performance of her latest single, "Slide Away," which many believe to be about Liam Hemsworth, her husband of eight months who recently filed for divorce after the pair separated earlier this month.

In debuting her new song, Cyrus also debuted the new tattoo she got to commemorate her recent trip to Italy with Carter, during which the pair were spotted kissing and getting cozy on Lake Como. The "Wrecking Ball" singer inked her arm with the biscoine — the emblem of the House of Visconti and the symbol of the city of Milan.

Cyrus' parents cheered the 26-year-old during her performance Monday. Her mother, Tish Cyrus, told Entertainment Tonight that Cyrus' performance wasn't because she changed her mind, but that it "was just a last-minute thing. ... Something opened up and she came to sing and I'm so excited!"

The former "Hannah Montana" star said in July there was "no f----- way" she'd be performing at the event, which she hosted in 2015 and drew headlines for her infamous performance with Robin Thicke in 2013. She wasn't nominated for any awards this year.

On a different note, Brandon Lee, one of the stars of MTV's "The Hills: New Beginnings," said it'd be "f------ hilarious" and "amazing" if Cyrus were to join the cast of the reality television show, in which Carter used to appear before she and her ex, Brody Jenner, who also stars on the show, ended their relationship.

"I've been kind of out of the loop, but I don't know, I know Brody's fine," Lee, 23, told Entertainment Tonight. "To be honest, I was so surprised [by Brody and Carter's split]. They seemed happy to me."

As Carter and Jenner ended their relationship, Cyrus and Hemsworth seemingly ended theirs. Last week, Cyrus clarified on Twitter that cheating did not lead to the end of her relationship with Hemsworth, 29, following a TMZ reported that claimed Cyrus' infidelity led their marriage to crumble.

“I can accept that the life I’ve chosen means I must live completely open and transparent with my fans who I love, and the public, 100% of the time,” Cyrus said. “What I cannot accept is being told I’m lying to cover up a crime I haven’t committed. I have nothing to hide.”