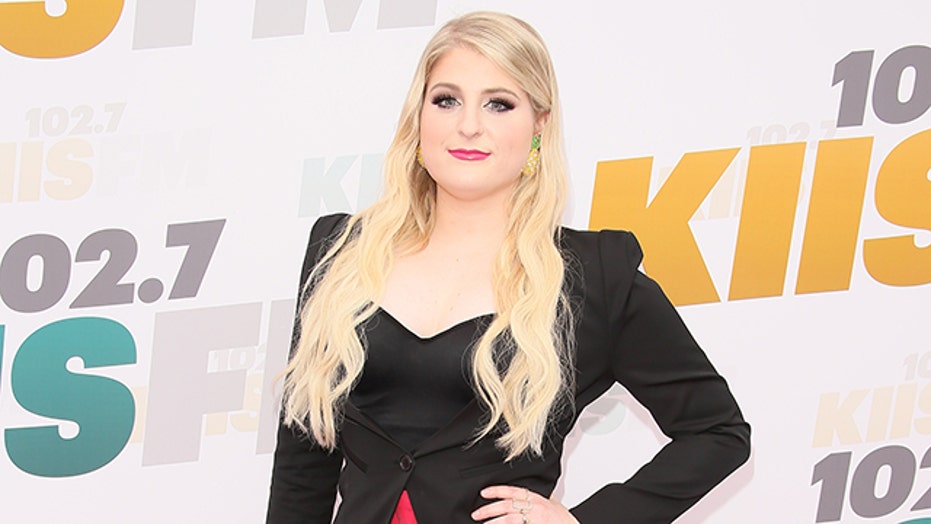 Meghan Trainor is speaking out about a trying moment in her career.

The singer spoke to Apple Music and opened up about overcoming a massive panic attack while announcing the 2017 Grammy nominations on live television alongside Gayle King.

Trainor’s nerve-wracking moment came just a year after she had taken home a Grammy of her own for best new artist.

"After ‘Thank You,’ which was my last album... I met the love of my life. Everything was great. And I had vocal problems 'cause I was working too much," Trainor, 26, said, according to Entertainment Tonight.

She said she "finally collapsed physically and emotionally" due to her mental health struggles.

Meghan Trainor, right, and Daryl Sabara arrive at the world premiere of "I Feel Pretty" at the Westwood Village Theater in Los Angeles. The pair married on Sunday, Dec. 23, 2018 the couple’s Los Angeles home. (Photo by Jordan Strauss/Invision/AP, File)

"I had, like, a mental breakdown and I had panic attacks live on television with Gayle King," Trainor continued. "I was reading the nominees for the Grammys the year after I won and I was shaking and I was like, 'Please don't collapse on TV right now. We're live.'"

Despite being able to harrow through the intense TV moment, the “All About That Bass” songstress said that once the taping was completed she “fell and started scream crying and couldn’t breathe.”

"And later, they took me away," she added. "I was supposed to do more work and they were like, 'We're done. This is it.'"

"The Voice UK" coach explained the reason for her anxiety was due in part to mounting expectations as a successful recording artist and fears that canceling scheduled shows could prove detrimental to her fledgling career.

"I had a lot of people tell me, like, 'If you cancel on this 30-minute set, we'll never play Meghan Trainor ever again,'" she said. "So I had everything. I had my Grammy, I had what people dream of for years. I had everything I ever wanted, and they were threatening to take it away.

"So, my mind was like, 'No I'll keep going, I'll keep going.' And my body was like, 'Bye.' And my body had to tell me, instead of me being able to take a break," Trainor added. "Like, the saddest thing is, like, your whole team is in the hospital with you like, 'Everything's gonna be OK.' And you... cannot speak. So I was alone with my thoughts for way too long and I blew up. I freaked out."

“The Four” judge explained that the combination of undergoing vocal surgery and experiencing other “crazy things” that she went through ultimately forced her to visit a psychologist.

"I met so many doctors and I would just cry to them, and be like, 'It's something right here. Can you just fix it for me? Help me out,'" she shared. "And finally I went to a psychologist and I said, 'My back is burning, like, as if someone's holding a torch to it. But I'm OK.' And he was like, 'OK, so what's happening is your chemicals are like this and we gotta get them back here.'"

"And he gave me two medicines that I take every single day and it saved me. Saved my life," she added.

Trainor released her new album, “Treat Myself," last month after it was pushed back from its original August 2018 launch date and explained the inspiration behind its culmination.

MEGHAN TRAINOR TALKS WEDDING PLANS, WORKING WITH HER CO-STARS ON 'THE FOUR'

"Trust my gut. Believe in myself. I try to write my songs that are like, treat yourself, remember to love yourself. It's all to me,” she said. “It's also all to my fans, but I keep listening to these songs and I keep having to remind myself. Like, baby girl, love yourself."

When Fox News caught up with the “Lips Are Moving” singer in June 2018, she said that in her experience, being able to sustain a career in music has been much more difficult than breaking onto the scene as a new artist.

“I think it’s easier to break. I mean, they’re both very difficult,” Trainor said, speaking about the challenge of not only becoming a star but staying at the top.

“But for me, it was easier to break through than to sustain it, I’ve noticed. Because breaking through, I felt like I wasn’t working and they were just telling me, you have a number one! And, I was like on what, what do you mean? And nowadays, I’m like where are we?” she said with a laugh.