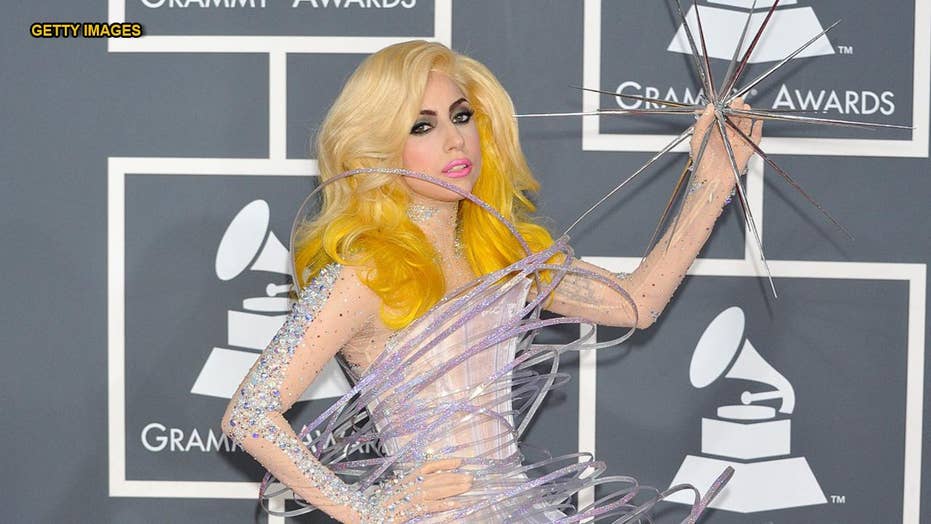 Lady Gaga is no stranger to turning heads with her Grammy Awards red carpet looks and performances. The Oscar-nominated actress is up for five Grammy awards this year including Record of the Year. Here's a look back at some of Lady Gaga's wildest Grammy moments.

Lady Gaga revealed she averted a “musical crisis” after she realized she forgot to ink the fifth staff line in her musical note-inspired tattoo.

The singer showed off her new ink on Valentine’s Day, including a large stemmed rose that goes down her spine.

“Happy Valentine’s Day. A tattoo toast to ‘la vie en rose’ by the beautiful Winter Stone my spinal cord is now a rose,” she wrote.

The “A Star Is Born” actress also showed off her other tattoo -- G-A-G-A spelled out in musical notes. However, the singer realized she had made a mistake and forgot to add the fifth line of the staff.

“Musical crisis averted,” Gaga is heard saying in a shared video while laughing. “We’re OK. The fifth staff is back. Sorry music.”

“As a music theory student I’m appalled, as someone having fun with their friends I’m relieved,” she captioned the video post.

The “Bad Romance” singer who is nominated for Best Actress at this year's Academy Awards for her role in “A Star Is Born” is not the first celebrity to notice an ink error. Last month, pop star Ariana Grande fixed her Japanese text tattoo after fans pointed out the ink that was supposed to read “7 Rings” actually spelled out “shichirin,” which translates to a Japanese style barbecue grill.