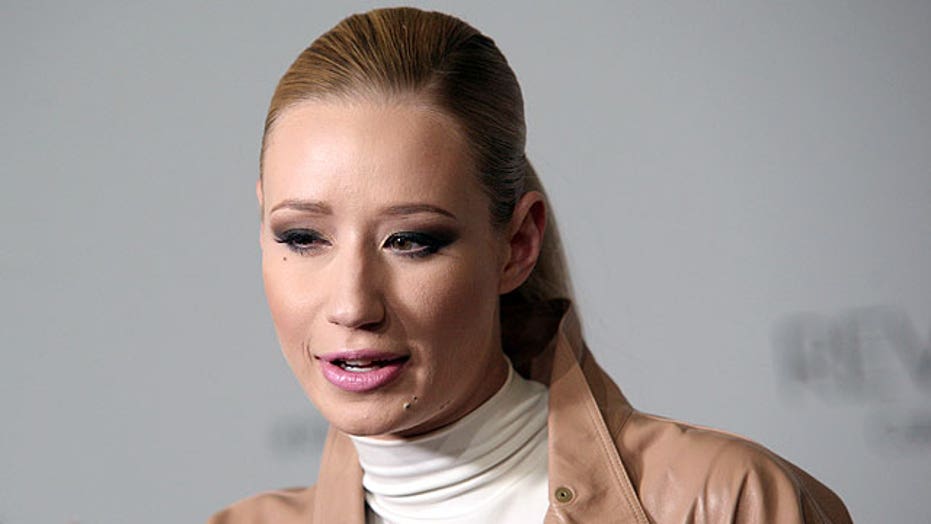 Is it her or not?

Iggy Azalea gave onlookers quite an eyeful when she went braless in a black tuxedo jacket to the GQ Awards in Los Angeles.

The rapper showed off her ample cleavage in the revealing outfit as she left her jacket fully open wearing nothing underneath but a long gold and emerald necklace.

The X Factor Australia judge protected herself from flashing even more fleshing by taping her blazer in place to cover her nipples.

Keeping the attention on her chest, Iggy sported matching black trousers and some shiny gold stilettos.

Her revealing ensemble also showed off her glowing tan and taut abs.

Wearing long hair extensions, her blonde locks grazed her waist as she posed on the red carpet.

Super Bowl sex tape shocker: Will she be next Kim Kardashian?

Iggy has never been shy about speaking of her love for her surgically enhanced breasts and said she always planned on being open about going under the knife.

She previously told E! News: “I love them so much I had to talk about them.

“Everybody did say, ‘I don’t think you need to say it because no one will ever know because they’re so small.

“I’d feel better not to have some secret. It’s much freer to say it and then you don’t have to worry someone will dig it up.”

Speaking to Vogue magazine in their 73 questions video, Iggy revealed the news about her boob job.

She said: “”I did change something: Four months ago, I got bigger boobs! I’d thought about it my entire life.”

She added, “It’s about proportion. I have to have everything tailored because I have such a small waist. I’m a 2 or a 0 on the top, and a 6 on the bottom.”