Terri Irwin, wife of the Crocodile Hunter, opens up about her husband's death and dating in a new interview. (Reuters)

Terri Irwin, the wife of the late Steve Irwin, who was more commonly known as the Crocodile Hunter, has revealed she has not been on a date in 27 years.

“I think it’s wonderful when people who have lost someone find love again, but I’m not personally looking, and I haven’t been on a date in 27 years,” Irwin told People. “In fact, it’s been so long, I’ve had a couple of lovely women ask me out because they figured that’s the case. But I’m content. I have two beautiful kids, a really full plate. I’ve already had my happily ever after.”

On Wednesday, Irwin shared intimate details about her marriage to the star. She said she hasn't felt the need to date since the his abrupt passing in 2006 when he was struck in the heart by a stingray.

“No matter the circumstances are that you lose someone, nobody’s truly prepared,” said Irwin. “Steve’s accident was so unexpected, it was extremely challenging."

The Irwins married in 1991, just eight months after meeting and falling madly in love. The couple enjoyed a 14-year marriage and had two children, daughter Bindi and son Robert.

After the "Crocodile Hunter's" freak accident, which led to his death, his wife said one of the ways her family learned to cope was through a daily conversation.

Steve and Terri Irwin pose with a crocodile in 2002. (Reuters)

“We’d each say our favorite part of the day, what we were most looking forward to tomorrow and a good deed we did that day,” she explained. “You can’t focus on yourself. You need to focus on what you’re doing for others and then you can start to heal.”

Though Steve Irwin died 12 years ago, the family will continue his legacy and star in a new "Crocodile Hunter"-inspired series, which is set to air on Animal Planet this fall. 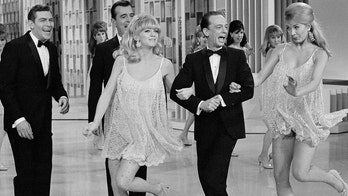