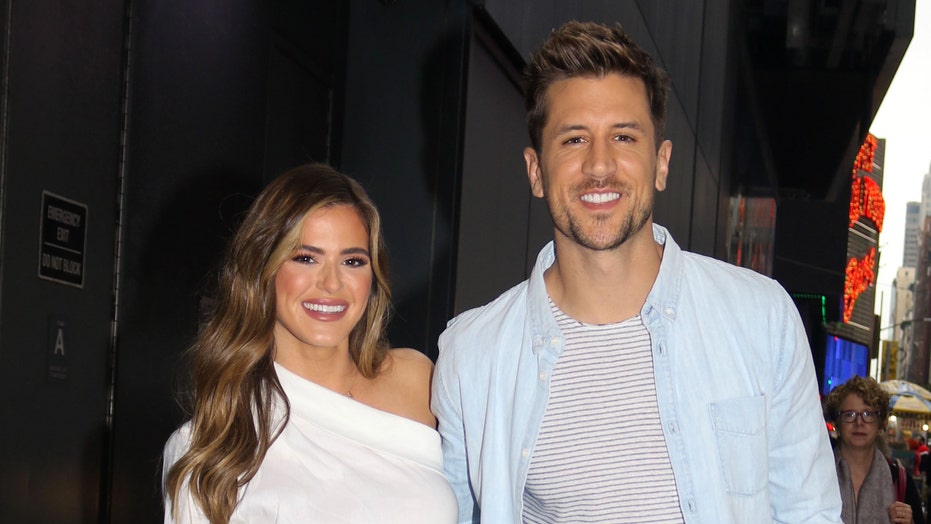 "The Bachelor" premiered 19 years ago and spawned a series of spinoffs including "The Bachelorette" and "Bachelor in Paradise." While many fans tune in every Monday night for the drama, the jet-setting dates and the tears, they also watch for the love journey.

While the majority of single leads don't end up with their final person, once in a while the stars do align. Finding love on a reality TV show? What are the chances?

Check out all the couples below who actually made it work:

This couple met on Fletcher's season of "The Bachelorette." Rodgers (estranged brother of NFL quarterback Aaron Rodgers) was her finale pick and the two became engaged in 2016. They have set a wedding date for sometime in 2020 and are currently busy planning their big day.

"The reason why our engagement is long is because we're enjoying this really great place that we're in and loving life together," Fletcher explained back in 2018.

This controversial couple made waves in Bachelor Nation during Season 22 of "The Bachelor" when he first picked Becca Kufrin in the finale episode only to later change his mind and break up with her on camera.

Luyendyk confessed he had stronger feelings for runner-up Burnham and was going to pursue a relationship with her. He proposed to Burnham on ABC's "Bachelor's After the Final Rose" special and they wed in January 2019 in Hawaii.

They welcomed a daughter, Alessi, a few months later. And just welcomed boy-girl twins, Senna and Lux, in June 2021.

Unglert and Miller-Keyes met during Season 6 of "Bachelor in Paradise" and are currently still dating and traveling around the world, vlogging about their experiences.

Godwin and Barbour just celebrated their love with an engagement party. The couple also met on "Bachelor In Paradise" and got engaged at the end of Season 6 in September 2019.

"Communication has been the most important part from beginning to end," Godwin told Elite Daily, referencing what she works on in her relationship. "And in any relationship, just focusing on expressing how you feel, and if that's good things, that's good. And if it's not so good things, then it's also good to talk about those too."

They originally met on "Bachelor in Paradise" Season 2, and Iaconetti fell for Haibon immediately -- but the feelings weren't mutual. Summer 2016 rolls around and they are back on "BIP," but Haibon is dating someone else.

Then in Winter 2018, Iaconetti began dating Kevin Wendt until Haibon admitted his feelings to her.

They revealed they were dating in a 44-minute YouTube video about their love story. He later popped the question in Summer 2018 and they got married in August 2019.

The pair married in August 2019 and announced they are expecting their first baby together in July 2021.

"I see her more as my family than any kind of girlfriend, and I just knew I couldn’t ever let her go," Wendt told People magazine. "I forget that we met on a TV show, because now it’s just my real life."

The couple announced in May 2021 they are expecting their first baby together.

The "Bachelorette" star picked Abasolo on the finale of Season 13 and they married in 2019.

In October, they told Us Weekly they are eager to start a family. "We hope [to have kids] sooner rather than later," Lindsay said. "We’re not preventing it, but if we’re planning, in the next year."

This pair met on the spinoff series "Bachelor in Paradise" in 2018 and is married in April 2021 after having to postpone their wedding because of the pandemic.

"We've been waiting for this day for a long time!" she told People magazine. "I'm so happy to get married to someone I love so much."

Jade Roper and Tanner Tolbert are married and have three kids together.

Roper and Tolbert also met on "BIP" Season 2 and married in January 2016 in a televised wedding.

Catherine Giudici Lowe and Sean Lowe met on the 7th season on "The Bachelor" in 2013. (Steve Zak Photography/Getty Images)

Lowe proposed to Giudici on the 17th season on "The Bachelor" in 2013. They married in 2015 and now have three kids together: two sons and a daughter.

"In my opinion, I think that I found someone who, one, she just genuinely loved me with everything that she had but two, we both committed," Lowe explained of why their marriage works, according to E! News. "And I give a lot of credit to Catherine because Catherine had to leave her hometown of Seattle, leave her job, leave her friends and basically start a new life with me. But she committed to love me and to work on our relationship and she continued to work after we were married in our marriage to be the best wife she possibly could be, which isn't always easy after making all those sacrifices."

Hartsock and Siegfried have two sons and have been married since 2015. They met on the ninth season of "The Bachelorette," which premiered in May 2013.

"I’ve never in my life met anyone like Chris," Hartsock said about Siegfried on the show. "I just feel so lucky to be that person that is receiving his love, because I’ve never felt anyone has loved me as much as I have loved them. It’s hard, because I feel guilty. Like, how could I not have loved him from the beginning?"

Molly Malaney (L) and  Jason Mesnick met on the Season 13 of "The Bachelor."  (Ethan Miller/Getty Images)

Mesnick and Malaney have been married since 2010. The couple met on Season 13 of "The Bachelor." He proposed to her on the show's finale in 2009. They live in Seattle with their two kids.

During the pandemic in 2020, they celebrated a decade of marriage.

Ryan Sutter and Trista Sutter met on the first-ever season of "The Bachelorette" in 2003.

Rehn and Sutter married in 2003 after meeting and falling in love on the first season of "The Bachelorette." They currently live in Colorado with their two kids, Max and Blakesley.

"You have to put in the time and effort and energy that you do into everything else in your life," Sutter said on the Today show about working on their relationship. "And I feel like [Ryan and I] do that. We've had our bumps in the road, just like anyone else, but it's really about staying focused on each other and dedicating time to each other."

Kaitlyn and Jason began dating in January 2019. He was previously on Becca Kufrin's season of "The Bachelorette" in 2018 while she was Kaitlyn was the Season 11 "Bachelorette" lead in 2015.

The pair met while taping an episode of Kaitlyn's podcast "Off the Vine" and in a full circle moment he proposed to her in May 2021 on the same podcast.

"It was everything I could have asked for," Kaitlyn told ET. "The words that came out of his mouth were insanely beautiful. We’ve never locked eyes like that in our lives. We were holding hands, so intense, and I was listening to his every word but still blacked out."

"Bachelorette" star Clare Crawley met Dale Moss on her season in 2020. The couple instantly fell for each other and the show stopped filming after just a few weeks.

The football star proposed to the hairstylist with a 4.5-carat diamond ring but in January 2021 the pair split only to reconcile a month later.

After Crawley's departure from the dating show after just two weeks, Tayshia Adams stepped in. She was previously on Colton Underwood's season of "The Bachelor" and later on "Bachelor in Paradise."

Zak proposed on the "Bachelorette" season finale in 2020 and the two are currently living together in New York City. Tayshia and Kaitlyn are also the new co-hosts of the "Bachelor" franchise.

TAYSHIA ADAMS REACTS TO CHRIS HARRISON 'STEPPING ASIDE' FROM 'THE BACHELOR'

Matt James and Rachael Kirkconnell broke up and then got back together.  (ABC/Craig Sjodin)

In one of the most controversial seasons of "The Bachelor" to date, at least its stars found love.

Matt James, the first Black "Bachelor" lead, chose Rachael Kirkconnell during the show's finale in 2021. Although he said he wasn't ready to propose, the couple did date for a few weeks until a racism scandal made headlines.

Kirkconnell admitted to attending an "Old South" party. She was also accused of bullying a girl in the past for dating a Black man and allegedly liking racist photos. The scandal caused longtime host Chris Harrison to step down as host after he made insensitive comments about the ordeal.

James said he was disappointed in Rachael during the "After the Final Rose" special and need time and space to reevaluate their relationship.

In May 2021, he confirmed he was back together with Rachael.

Katie Thurston ended her season of "The Bachelorette" with an engagement ring from Blake Moynes.

Currently, the couple is spending time in Blake's native Canada. "We need to see each other’s lifestyles and our passions, our interests, and then try to see where our anchor spot will be, where all those things can kind of align and make sense for both of us," Blake told Us Weekly. "We’re going to jump around for a bit and experience what works best for us."