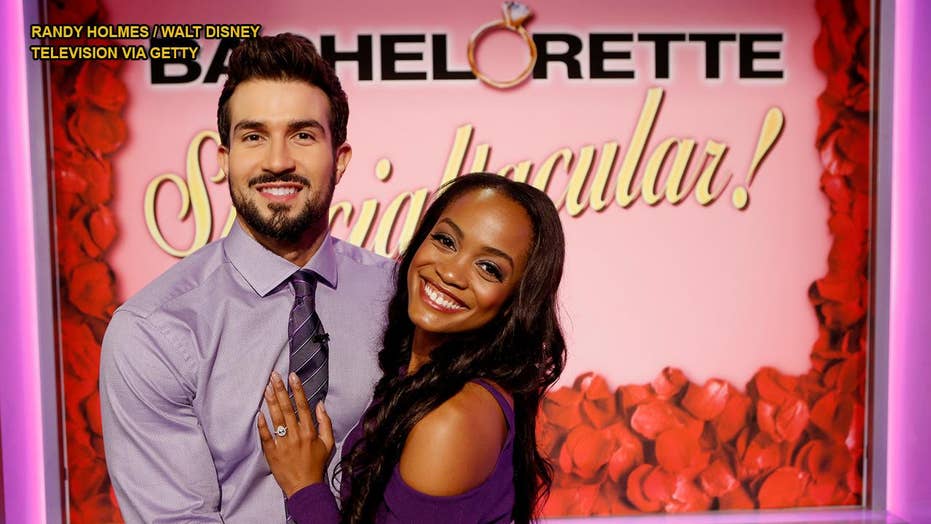 'Bachelorette' star Rachel Lindsay reveals what married life is really like after tying the knot with cast mate Bryan Abasolo.

Rachel Lindsay made TV history as the first African-American “Bachelorette” to star in the franchise — but she’s not feeling optimistic about the show's future.

The 34-year-old said she lost hope that the franchise will continue to celebrate diversity after Mike Johnson wasn’t cast as the lead of “The Bachelor” Season 24. That role went to Peter Weber. However, if the 31-year-old Air Force vet was offered the coveted title, he would have become the first black “Bachelor” in the series. In September of this year, Lindsay told Entertainment Tonight “We’ve seen 24 Peters. I’m bored.”

‘BACHELOR’ STAR COLTON UNDERWOOD SAYS HE HAS NO REGRETS ADMITTING HE’S A VIRGIN, WANTS TO STAY TRUE TO HIMSELF

But the lawyer-turned-TV personality also has plenty of reasons to celebrate these days. In August, she officially lost her “Bachelorette” title when she married contestant Bryan Abasolo, a Florida-based chiropractor who popped the question during the finale.

It didn't take long for Rachel Lindsay to rebound from her surprising, gut-wrenching rejection by Nick Viall and capture the hearts of America. Now after surviving shocking twists and turns and a journey filled with laughter, tears, love and controversy, Rachel narrowed down the field. She finds herself falling in love with all three of these captivating men and terribly torn between them. She can envision a future with all of these bachelors, but time is running out. (Photo by Paul Hebert/Getty Images)

Lindsay and Abasolo spoke to Fox News about watching their love story unfold once again on Tubi, a free streaming service, as well as why Lindsay believes there won’t be another African-American contestant anytime soon.

Fox News: Rachel, why do you believe we don’t have an African-American “Bachelor” quite yet?
Rachel Lindsay: I don't know... I think it's unacceptable at this point. The show's been on for 17 years. We're going into 24 seasons of "The Bachelor," and it's yet to happen. So you kind of start to lose hope because you don't understand what the problem is, especially when you have such a good candidate in Mike Johnson, who was just on this last season. I think that they'll have to change some things and break the rules because obviously the system as it is isn't working. So hopefully they step outside of the box and really try to pursue filling that role with a person of color...So to be honest, I'm not really hopeful.

'THE BACHELORETTE': FIRST AFRICAN-AMERICAN STAR RACHEL LINDSAY GREETS 'THE MOST DIVERSE' CAST EVER ON PREMIERE

Fox News: What’s it been like watching your love story unfold today?
Bryan Abasolo: It’s been absolutely great just to go back and rekindle all those magical moments from me stepping out of the limo and meeting Rachel for the first time, to our one-on-one dates and the crazy group dates, and just all the drama that went on during the season. And last but not least, of course, the best part about it was the proposal.


Lindsay: We’ve been here so long, two years removed that it's crazy to go back to that place of just learning each other and meeting for the first time and seeing the progression of our love. So I'm excited to go back and watch it again and we're excited for the people who never seen it before too, to be able to watch our love story for the first time.

Fox News: Some fans were surprised that you chose not to televise your wedding.
Lindsay: I think for us, initially we were all in with a televised wedding and that's what we wanted, but that's because we were in the rhythm of sharing our love in public. We met on TV, we fell in love on TV and we wanted to keep that going for the people who were invested in our story so they could see the whole thing through.

But then as we really got comfortable in real life and got to know each other off-camera, it just really seemed that the natural fit for us was to do our own thing and to be in control of our wedding. Do it in an intimate setting, away from the camera, just to make our family and friends comfortable, and for people to be themselves and not have to worry about being produced.

Rachel Lindsay and Bryan Abasolo tied the knot in 2019. (Photo by Josiah Kamau/BuzzFoto via Getty Images)

'BACHELORETTE' ALUM LUKE PARKER BLAMES EDITING FOR 'VILLAIN' ROLE, REVEALS WHAT WENT DOWN BEHIND THE SCENES

Fox News: What’s married life really like these days?
Abasolo: Honestly, I feel like we've been feeling like we've been married even before the wedding. I think now it just makes it more official. I think the aspects of married life that we appreciate the most are just calling each other husband and wife which is new to us, me wearing my ring, so I think just the little things.

Fox News: What’s a common misconception you both feel the public still has about the two of you?
Abasolo: We got a lot of criticism after the fact, right after the show finished airing about us not being real or in it for the right reasons, or whatever excuse you want to give that we're faking it or whatnot. But I think we've been real since day one. The second I stepped out of the limo I was completely upfront and honest with her, and she was the same way in return. And I just think that's been a staple of our relationship leading up to today when we're married.

Lindsay: ... You see me on TV and I talk a lot and have a lot of opinions, and they think that that translates into how our relationship is and how we function together. And it's nothing like that at all. I'm not a person who's wearing the pants in the relationship. It's not like that. It's a lot of give and take, a lot of sacrifices and we really have a great balance. And so I think that that's something that you can't see on camera, but we are like that in real life.

Fox News: When did you both realize you had found The One?
Abasolo: I think we both agree on this answer. I would say it was during our Geneva date... I think that date really solidified [it] for me. We both got the answers that we were looking for just to take us over the edge. And for me it was just meeting my family was that final little step where they absolutely loved her and approved of my decision, and it's been great ever since.

Fox News: What do you hope audiences will get from your love story?
Lindsay: I really hope that people will see that real life is not a fairy tale even if you do find love on reality TV, and you will see the progression of our relationship. Yes, we had this initial spark and I gave him my first rose, but it was a progression. And you see me explore other relationships and you see me see those through because I needed to figure out if what I had with Bryan was the real deal.

I needed to differentiate between love and lust, and I needed to make sure that what I was feeling was real because if it was, then I wanted to spend the rest of my life with this person. So you'll see the ups and downs and the struggles, and I think that that's very real for people and I'm glad that now you can go back and watch it again or just watch it for the first time.