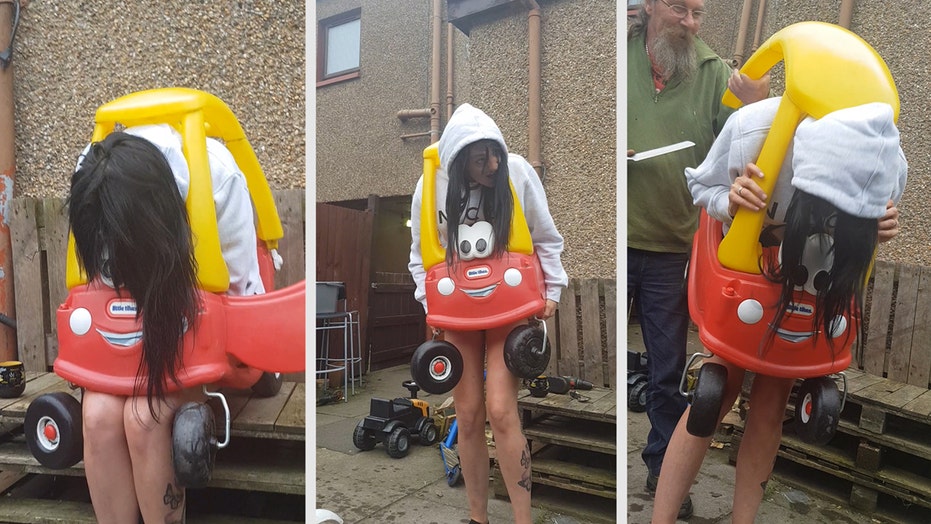 This was not her ticket to ride.

A woman in Scotland ended up having to be cut out of a children's toy car with a bread knife on Friday after an attempt at a joke went very wrong.

Zoe Archibald, 34, had climbed into her cousin's red and yellow Little Tikes car after joking how she thought she could fit - but ended up getting wedged inside.

"There was no way she could get herself out," her nephew, Matthew Shepherd-Bull, told South West News Service.

OREGON HIGH SCHOOL STUDENTS INVOLVED IN SENIOR PRANK WILL GET TO WALK AT GRADUATION, OFFICIALS SAY

The 34-year-old had attempted to climb into the tiny vehicle but when that didn't work, it was placed over her head.

Zoe Archibald managed to get stuck in the children's toy car during a family gathering on Friday. (SWNS)

The car ended up getting jammed around her mid-section.

Archibald, unable to wriggle herself out of the car, ended up being trapped for an hour.

BANK ROBBER STRIKES IN ISRAEL, THREATENING TELLERS WITH AVOCADO HE CLAIMED WAS GRENADE

"No matter what we did she wasn't able to get out. Everyone found it funny, even Zoe," Shepherd-Bull said.

This is the hilarious moment a woman has to be cut free from a toddler's toy car using a bread knife. (SWNS)

"She was a bit panicked but mainly found it funny," he added.

The 34-year-old was eventually able to get free after her dad grabbed a butter knife to cut her out.

"It took about 15 minutes to cut through the plastic," Shepherd-Bull said.