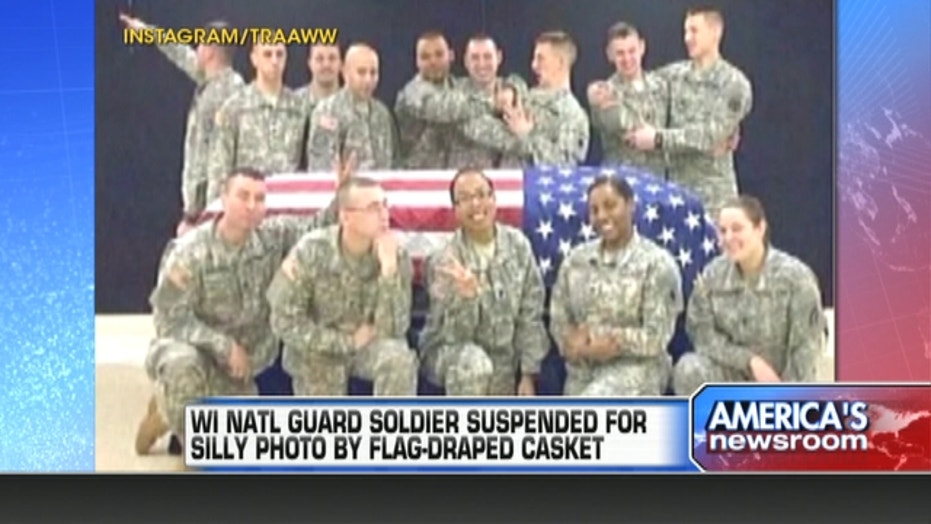 The Wisconsin National Guard has suspended one of its members amid an uproar over photos that appeared on social media apparently making fun of funerals for fallen soldiers.

The Wisconsin National Guard has suspended one of its members amid an uproar over photos that appeared on social media apparently making fun of funerals for fallen soldiers.

One photo, posted by Spc. Terry Harrison,  shows various members of the troop posing – most smiling and others in comical positions – around an empty, American-flag draped coffin.

The photo is accompanied by a caption that reads: "We put the FUN in funeral your fearless honor guard from various states."

“We expect all of our Soldiers and Airmen to live by a core set of values, in word and deed,” Maj. Gen. Donald P. Dunbar, the Wisconsin adjutant general said in a news release. “I was appalled by the offensive photos and comments that appeared on this Soldier’s social media site regarding her duties as a funeral honor guard member.”

“Not only do you need to deal with the disrespectful honor guard member but also her supervisor that defended her actions!” wrote Linda Gonzalez, who commented on the National Guard’s Facebook page. “Appalling all around! I currently serve and to think that one day I could be buried by this disrespectful unit terrifies me!!!”

Army public affairs officer Maj. Paul D. Rickert announced Harrison's suspension Tuesday and said that while he understands that their content is upsetting to many, the pictures do not do not portray any misconduct during the performance of actual military funeral honors.

“A military funeral is the final show of respect for our veterans and their families, and we take that solemn duty very seriously,” Rickert said in a news release. “The very name ‘military funeral honors’ underscores the importance we ascribe — both as the military and society at large — to such solemn occasions. These photos and comments do not appear to align with those values.”

Another photo causing a stir on the web shows Harrison with a folded flag in the background with the caption, "It's so damn cold out. Why have a funeral outside? Somebody's getting a jacked up flag."

The Army Times reports that this is the second incident in less than a week that has caused the Armed Forces embarrassment over social media. Air Force Staff Sgt. Cherish Byers is the subject of an investigation after a three-year-old photo of her tongue-kissing a Prisoner of War-Missing in Action symbol went viral.

"We take the responsibility given to members with respect to fallen soldiers very seriously and expect all soldiers assigned to (the unit) to perform their duties with honor and respect," Rickert said, according to the Milwaukee Journal Sentinel.