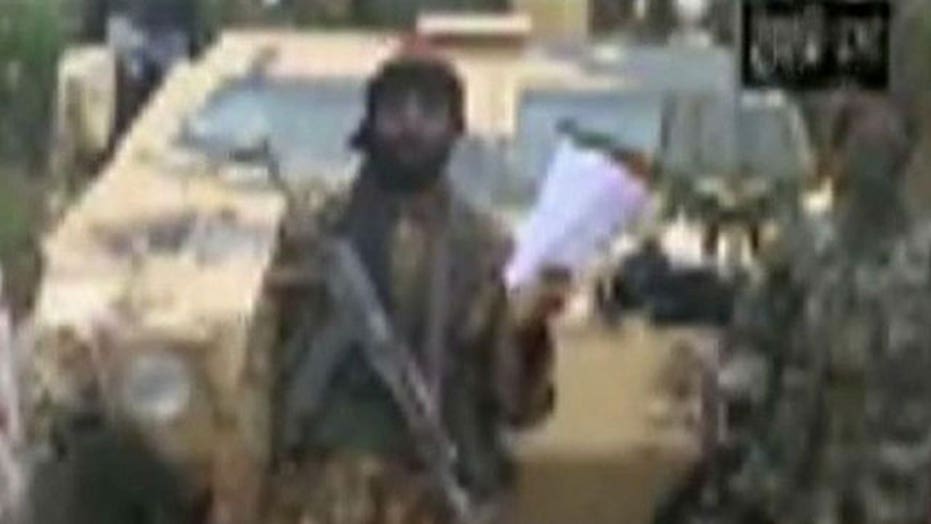 An Islamic extremist leader has threatened to sell the 276 teenage girls his terror group abducted from a school in northeast Nigeria three weeks ago.

In a videotape screened by the Associated Press Monday, Boko Haram leader Abubakar Shekau claimed responsibility for the April 15 kidnappings for the first time. He also threatened to attack more schools and take additional girls.

"I abducted your girls," said the leader of Boko Haram, which means "Western education is sinful."

He described the girls as "slaves" and said "By Allah, I will sell them in the marketplace." The hour-long video starts with fighters lofting automatic rifles and shooting in the air as they chant "Allahu akbar!" or "God is great."

The Pentagon said Monday it had not received any request to assist in the search for the teenage girls. But Secretary of State John Kerry did vow Saturday that the U.S. would help Nigerian officials locate the schoolgirls in whatever way it can.

“This is an outrage and a tragedy and we are doing what we can to assist the Nigerian government to support its efforts to find and free the young women who were abducted,” Carney said.

It was unclear if the new video was made before or after reports emerged last week that some of the girls have been forced to marry their abductors -- who paid a nominal bride price of $12 -- and that others have been carried into neighboring Cameroon and Chad. Those reports could not be verified.

In the video, Shekau also says the students "will remain slaves with us." That appears a reference to the ancient jihadi custom of enslaving women captured in a holy war, who then can be used as sex slaves.

"They are slaves and I will sell them because I have the market to sell them," he said, speaking in the Hausa language of northern Nigeria.

The video was reviewed by The Associated Press and both the face and the voice of the leader of Boko Haram were recognizable.

Shekau brushed off warnings that the abductions could be an international crime, saying in English, as if to reach his accusers in the international community: "What do you know about human rights? You're just claiming human rights (abuses), but you don't know what it is."

An intermediary who has said Boko Haram is ready to negotiate ransoms for the girls also said two of the girls have died of snakebite and about 20 are ill. He said Christians among the girls have been forced to convert to Islam. The man, an Islamic scholar, spoke on condition of anonymity because his position is sensitive.

The failure to rescue the girls is a massive embarrassment to Nigeria's government and the military, already confronted by mounting criticism over its apparent inability to curb the 5-year-old Islamic uprising despite having draconian powers through an 11-month state of emergency in three northeastern states.

Protesters all over Nigeria expressed anger, many saying President Goodluck Jonathan is not doing enough to rescue the girls. Jonathan, who is from the predominantly Christian south of Nigeria, has been accused of insensitivity to the plight of people in the north, who are mainly Muslims.

First lady Patience Jonathan fueled frustration Monday when a leader of a protest march said she ordered the arrests of two protest leaders, expressed doubts there was any kidnapping and accused the protest leaders of belonging to Boko Haram.

It was unclear what authority Mrs. Jonathan would have to give such orders, since there is no office of first lady in the Nigerian constitution.

Ayo Adewuyi, spokesman for the first lady, said he was unaware of any arrests. "The first lady did not order the arrest of anybody, and I'm sure of that," he told the AP..

But Saratu Angus Ndirpaya of Chibok town said State Security Service agents drove her and protest leader Naomi Mutah Nyadar to a police station Monday after an all-night meeting at the presidential villa in Abuja, the capital. She said police immediately released her but that Nyadar remains in detention.

Monday afternoon, police said she had been returned home. A statement denied she was detained, saying she was "invited ... (to) an interactive and fact-finding interview. "

Ndirpaya said Mrs. Jonathan accused them of fabricating the abductions. "She told so many lies, that we just wanted the government of Nigeria to have a bad name, that we did not want to support her husband's rule," she said in a telephone interview with The Associated Press.

She said other women at the meeting, allies of Mrs. Jonathan including officials of the government and the ruling party, cheered and chanted "yes, yes," when Mrs. Jonathan accused them of belonging to Boko Haram. "They said we are Boko Haram, and that Mrs. Nyadar is a member of Boko Haram." She said Nyadar and herself do not have daughters among those abducted, but are supporting the mothers of kidnapped daughters.

Mrs. Jonathan said the women "had no right to protest," especially Nyadar, whom she identified as the deputy director of the National Directorate of Employment. Jonathan said Nyadar should resign her government post, Ndirpaya said.

In a report on the meeting, Daily Trust newspaper quoted Mrs. Jonathan as ordering all Nigerian women to stop protesting, and threatening "should anything happen to them during protests, they should blame themselves."

On Sunday night, Jonathan said his administration is doing everything possible. On Friday he created a presidential committee to go to the affected Borno state to work with the community on a strategy to get the girls free.

Heavily armed gunmen believed to Boko Haram raided a Cameroonian police unit near the Nigerian border early Monday, killing an officer on duty and freeing one of their detained comrades, authorities there said.