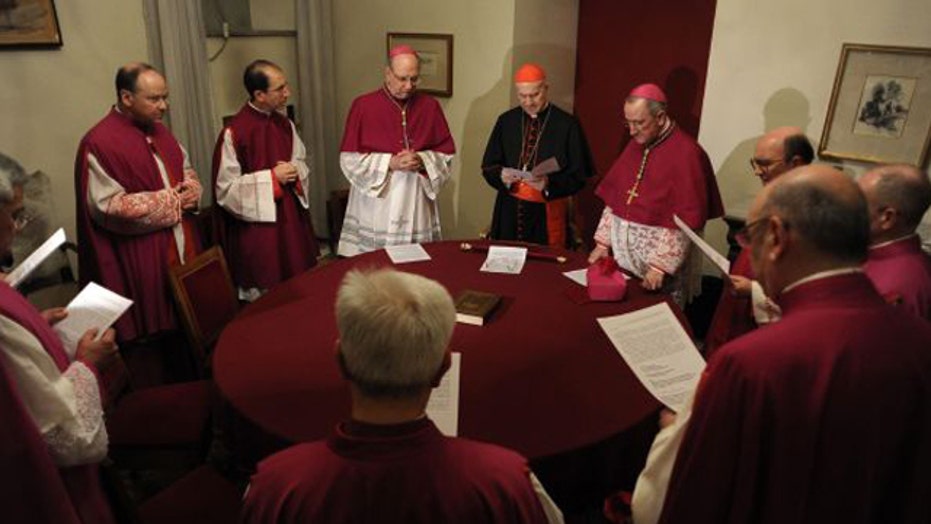 Issues the next pope must address

VATICAN CITY – The Vatican took the first steps of governing a Catholic Church without a pope on Friday, making some ceremonial and practical moves to formalize the end of one pontificate and prepare for the conclave to start the next.

Benedict XVI's 8 p.m. resignation Thursday opened what is known as the "sede vacante" or "vacant see" -- the transition period between papacies when a few key Vatican officials take charge of running the church.

The dean of the College of Cardinals formally summoned his fellow "princes" of the church to Rome for an initial pre-conclave meeting on Monday -- something of a formality given that many of them are already here. But in a letter Friday, Cardinal Angelo Sodano also made clear that the conclave date won't be set until they have all arrived, meaning it may still be some time before a date is settled on.

Separately, the deputy to the camerlengo -- who administers the Vatican during the transition -- took symbolic possession of one of the papal basilicas in Rome. For obvious reasons, the camerlengo will not take possession of the main papal residence outside Rome -- Castel Gandolfo -- since that is Benedict's current retirement home.

In one of his last acts as pope, Benedict loosened the rules on the timeframe for the camerlengo to take possession of papal holdings, precisely to allow him to live out his first few months in retirement in what is an official papal residence.

Here are the top figures who will run the church in the coming days:

The camerlengo, or chamberlain, takes over the day-to-day running the Holy See as soon as the papacy ends. He places the seal on the pope's study and bedroom, and takes possession of the Apostolic Palace, "safeguarding and administering the goods and temporal rights of the Holy See" until a new pope is elected. On Thursday night, Bertone sealed the papal apartment, which will not be reopened until a new pope is elected.

Benedict in 2007 gave the camerlengo job to Bertone, 78, a natural choice, given that Bertone is currently the Vatican No. 2 as secretary of state and runs the Vatican bureaucracy anyway. A priest of the Salesian order, Bertone was trained as a canon lawyer and taught in various Roman universities for several years before coming to work for the former Cardinal Joseph Ratzinger at the Vatican's doctrine office in 1995.

As secretary of state, Bertone has had Benedict's unwavering trust, but his legacy has been mixed. He had no diplomatic training coming into the Holy See's most important diplomatic and administrative post, and critics blame the gaffes of Benedict's papacy and the current state of the Vatican's dysfunction on Bertone's managerial shortcomings. The 2012 leaks of papal documents appeared aimed at undermining his authority further, by exposing the power struggles and turf battles that festered under his watch. In his last speech as pope, however, Benedict singled Bertone out for thanks.

THE DEAN OF THE COLLEGE OF CARDINALS: Cardinal Angelo Sodano.

The dean is the senior member of the College of Cardinals, the so-called "princes" of the church whose main task is to elect a pope. The dean oversees the pre-conclave meetings, at which the problems of the church are discussed, and has duties inside the conclave itself, including asking the newly elected pontiff if he accepts the job. But Sodano is 85 and cannot vote, so some of those duties will shift to the sub-dean.

Burly and sociable, the Italian Sodano was Pope John Paul II's longtime secretary of state. As dean, he spoke on behalf of all the cardinals in giving a final farewell to Benedict on Thursday, thanking him for his "selfless service."

Still, Sodano and Benedict were known to have clashed when Benedict was Cardinal Joseph Ratzinger, particularly over the scandal-plagued Legion of Christ religious order. Sodano was a chief backer and protector of the Legion's late founder, the Rev. Marcial Maciel, even though the Vatican had known for years of solid allegations that he was sexually molesting his seminarians. Within Benedict's first year in office, Maciel was sentenced by the Vatican to a lifetime of penance and prayers for his crimes. That same year Benedict named Bertone to replace the retiring Sodano as secretary of state.

The master of liturgical ceremonies runs the religious side of the conclave and the installation Mass for the new pope, all of them carefully choreographed rituals. He is by the side of the dean when the newly elected pope is asked if he accepts the election. And as the main witness and notary, he draws up the formal document certifying the new pope's name and that he has accepted the job.

Benedict appointed Marini to the job in 2007, replacing Monsignor Piero Marini who for two decades was Pope John Paul II's right-hand man for all things liturgical. The shift was intentional. Under Guido Marini, papal Masses became far more reverent, with more Latin, Gregorian chants and the use of heavy silk-brocaded vestments of the pre-Vatican II church.

In changes introduced just before he resigned, Benedict made clear he wanted this more traditional vision of his papacy carried forward for the installation of a new pope. He called for the rites of installation to be separate from the liturgy itself and for the cardinals to make a public pledge of obedience to the new pope during the Mass. Previously, their pledge of obedience was done in private in the Sistine Chapel immediately after the election.

In keeping with Benedict's classical musical tastes, the new rites also allow for more flexibility in musical choices rather than the modern selections previously in favor. The aim, Marini recently told the Vatican newspaper L'Osservatore Romano, is to make "the most of the rich musical repertoire of church history."

The proto-deacon's main task is to announce to the world that a pope has been elected. He shouts "Habemus Papam!" ("We have a pope!") from the balcony overlooking St. Peter's Square after the white smoke has snaked up from the Sistine Chapel chimney. He then introduces the new pope -- in Latin -- along with the name the pope has chosen.

The French-born Tauran is a veteran Vatican diplomat who served in the Dominican Republic and Lebanon. He currently heads the Vatican's office for interreligious dialogue -- in other words the Vatican's primary point man for Catholic-Muslim relations. Benedict appointed him proto-deacon in 2011.