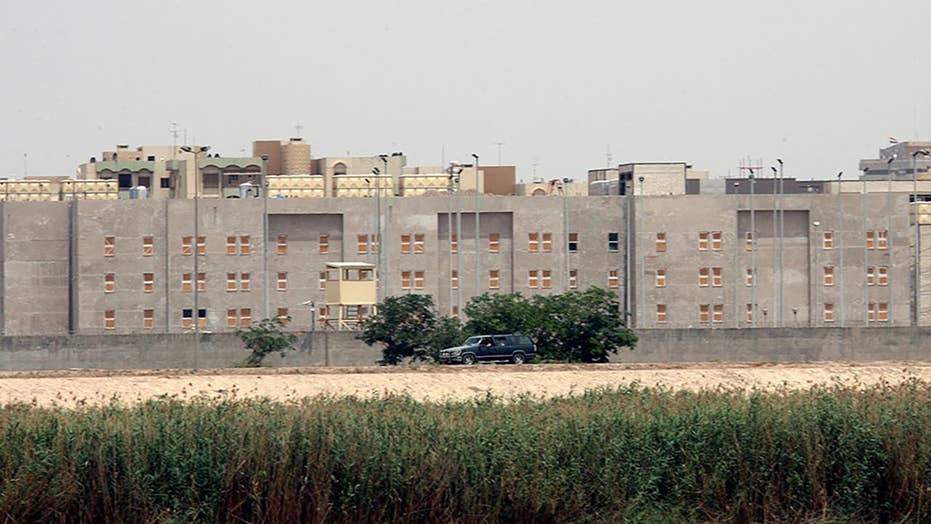 US tensions with Iran put the Middle East on high alert

In addition to the dozens of F-18 Super Hornet jets aboard the aircraft carrier, the strike group’s other warships hold hundreds of Tomahawk cruise missiles ready to strike if any U.S. forces are attacked, according to officials.

Earlier this week, the U.S. Central Command (CENTCOM) said its forces in the region had been placed on “high alert,” but no evidence was presented to justify the elevated security posture.

The USS Abraham Lincoln sails south in the Suez canal near Ismailia, Thursday, May 9, 2019. (Suez Canal Authority via AP)

But now, under pressure to explain the military build-up and change of posture, Pentagon officials say they are in the process of declassifying several satellite photos that they say shows cruise missiles aboard small Iranian vessels.

The images appear similar to another brazen display in April 2015, which prompted another American carrier strike group to be dispatched. U.S. officials are divided about what the recent images mean — if it is more a message from Iran on the one-year anniversary of the Trump administration ripping up the nuclear agreement or an actual new threat.

Pentagon officials have taken great pains to emphasize the new American forces sent to the region are to deter Iran, not start a war.

The USS Abraham Lincoln sails south in the Suez canal near Ismailia, Thursday, May 9, 2019. (Suez Canal Authority via AP)

CENTCOM has been pushing to release the satellite photos as soon as Thursday, but it could take longer as the images go through a complicated approval process. The concern is some of the Iranian missiles appear headed to Iraq, and look similar to previous shipments in September.

The concern among U.S. officials is these Iranian cruise missiles appear more advanced than the unguided rockets which were fired at the U.S. consulate in Basra in southern Iraq in September, prompting the State Department to close the facility.

UK FOLLOWS US LEAD, RAISES THREAT LEVEL IN IRAQ DUE TO THREAT FROM IRAN

In 2013, the U.S. Navy boarded an Iranian dhow off the coast of Yemen and seized weapons including Chinese-made, anti-aircraft missiles. It’s unclear if the U.S. Navy has attempted similar boardings or planned to do so in the future.

Last August, an American destroyer seized over 1,000 AK-47s rifles from a small vessel bound for Yemen, which had been linked to Iran.

Earlier this week, the Spanish frigate ESPS Mendez Nunez (F-104) reversed course and left the strike group after the Spanish government said it was at odds with the Trump administration’s stance on Iran.

A British general also expressed doubts about the threat from Iran and Iranian-backed forces in Iraq and Syria during a briefing to Pentagon reporters from Baghdad Tuesday. But Thursday, the British government joined with their American allies assessment of the Iranian threat and raised the threat level for all deployed British forces and diplomats in Iraq, but said they had no plans to evacuate any personnel from Baghdad.

British Foreign Secretary Jeremy Hunt tweeted on Thursday that he and Secretary of State Mike Pompeo "discussed #Iran last week in London and against in Brussels on Monday. We share the same assessment of the heightened threat posed by Iran. As always we work closely with the US."

Hunt's statement comes two days after a British Army general told Pentagon reporters there was "no increased threat from Iranian-backed forces in Iraq and Syria."

On Wednesday, Senate Minority Leader Chuck Schumer, D-N.Y., called for Patrick Shanahan, acting defense secretary, and the U.S. military’s top officer, Marine Gen. Joe Dunford, to testify publicly before the Senate Armed Services Committee on Iran by the end of the week to explain the sudden military build-up and what intelligence assessment led this escalation.

Officials told Fox News on Thursday both Pentagon leaders are resisting calls to brief lawmakers this week and will do so next week as originally planned.