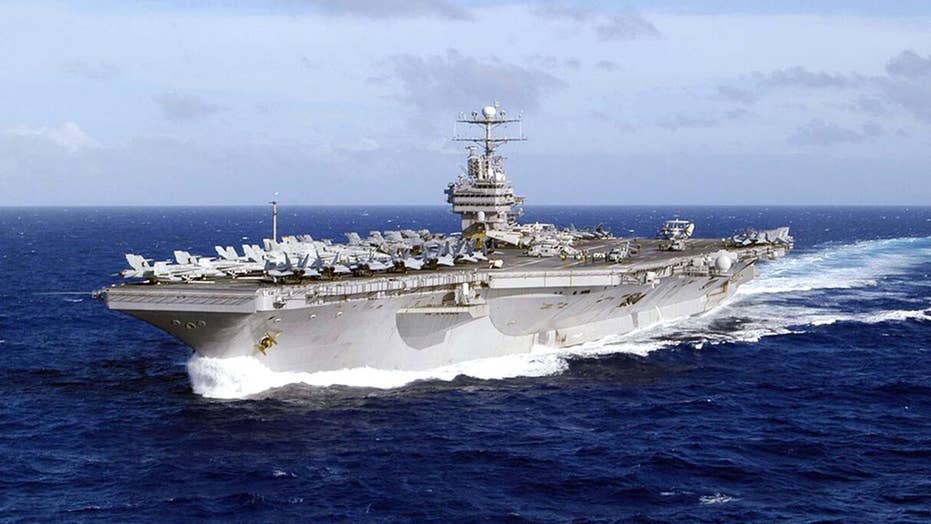 The U.S. is sending the USS Abraham Lincoln Carrier Strike Group and a bomber task force to the Middle East, National Security Adviser John Bolton announces; Lucas Tomlinson has the latest from the Pentagon.

The U.S. is sending the USS Abraham Lincoln Carrier Strike Group and a bomber task force to the Middle East in order "to send a clear and unmistakable message to the Iranian regime," National Security Adviser John Bolton announced Sunday night.

Bolton said the deployment was in response to "a number of troubling and escalatory indications and warnings" on the part of Tehran, but did not elaborate. Such deployments are rarely announced in advance.

"[A]ny attack on United States interests or on those of our allies will be met with unrelenting force," Bolton said. "The United States is not seeking war with the Iranian regime, but we are fully prepared to respond to any attack, whether by proxy, the Islamic Revolutionary Guard Corps, or regular Iranian forces."

Secretary of State Mike Pompeo, who is scheduled to meet Russian Foreign Minister Sergey Lavrov in Finland on Monday, told reporters the deployment is “something we’ve been working on for a little while” and “we will hold the Iranians accountable for attacks on American interests. If these actions take place, if they do by some third-party proxy, a militia group, Hezbollah, we will hold the Iranian leadership directly accountable for that.”

Aircraft parked on the flight deck of the USS Abraham Lincoln in this 2012 photo. (AP, File)

The strike group, which includes the aircraft carrier USS Abraham Lincoln, the guided missile cruiser USS Leyte Gulf and destroyers from Destroyer Squadron 2, departed Naval Station Norfolk on April 1 for what the Navy described as a "regularly scheduled deployment." The strike force is under the command of Rear Adm. John Wade.

The USS John Stennis aircraft carrier strike group was in the Persian Gulf as recently as late March. The Stennis and USS Abraham Lincoln joined forces in the Mediterranean Sea in recent days.

The deployment comes less than a month after the Trump administration designated Iran's elite Islamic Revolutionary Guard Corps (IRGC) a terrorist organization. In late March, the Air Force pulled its bombers from Qatar, one of the rare times since 2001 no bombers were deployed to the Middle East.

Last month, the Air Force deployed a task force of F-35 stealth fighter jets for the first time to the Middle East.  Last week, some of the advanced jets carried out their first air strikes against ISIS, the Air Force said.

Earlier Sunday, Axios reported that the Trump administration was preparing to announce a new set of sanctions against Iran on Wednesday, one year after the U.S. pulled out from the 2015 Iran nuclear deal. The Wall Street Journal reported last week that the White House was considering sanctions targeting petrochemical and consumer goods sales by Iran, but Axios reported Sunday that the sanctions to be announced this week would target a different sector of the rogue nation's economy.

The U.S. Navy says there have been zero cases of “unsafe” interactions between its warships and aircraft and Iranian forces this year as well as last year.

The deployment also comes amid the bloodiest fighting in five years between Israel and Palestinian militants in the Gaza Strip.

Last Friday, two Israeli soldiers were wounded by snipers from the Iran-backed militant group Islamic Jihad. Late Saturday, the Israeli military announced that an airstrike had killed Hamas commander Hamed al-Khoudary, a money changer whom Israel said was a key player in transferring Iranian funds to the militant group.