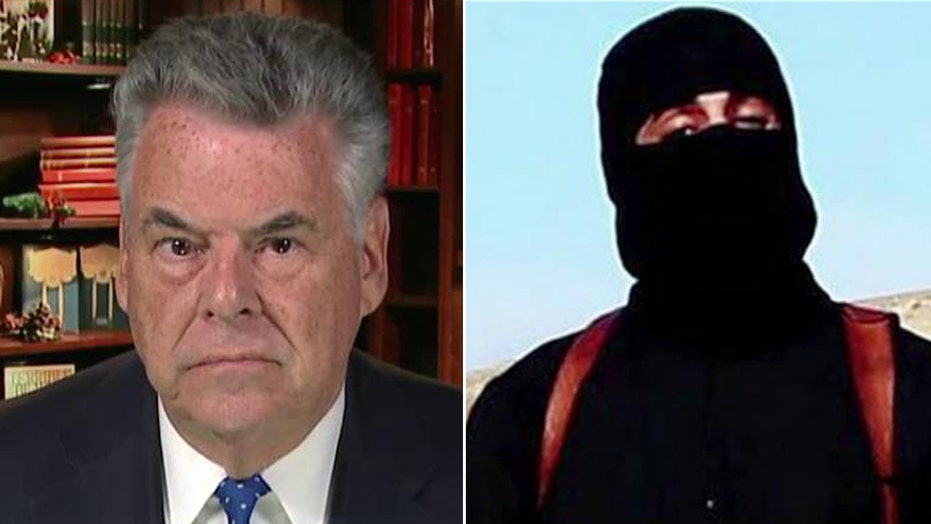 Earlier, a U.S. military official, discussing the airstrike in Raqqa targeting the notorious jihadist, told Fox News, "we are 99 percent sure we got him."

In a Pentagon briefing Friday from Baghdad, Warren, a spokesman for the U.S.-led coalition, sought to downplay the airstrike calling it more a “blow to the prestige" of ISIS than a military victory. Warren called the strike “routine” and said similar strikes against mid-to high value ISIS leaders has occurred every two days since May.

But Warren later said that Jihadi John’s death is “significant” blow to ISIS.

"This guy was a human animal and killing him is probably making the world a better place," he added.

Warren said the driver of the vehicle carrying Jihadi John was also killed after being struck by a hellfire missile fired from the U.S. drone.

The killing of Jihadi John comes as the U.S. military is stepping up airstrikes throughout Iraq and Syria.

Warren said Operation Tidal Wave II, a U.S.-led bombing campaign targeting ISIS’s oil infrastructure in eastern Syria near the city of Dayr as Zawr has been underway in recent days to destroy oil infrastructure controlled by ISIS.  ISIS receives two-thirds of its revenue from oil, according to Warren. Despite earlier attempts to destroy the refineries in eastern Syria, Warren said the damage inflicted earlier was repaired in a 24-hour period on average.

The first “Tidal Wave” operation dates back to World War II when the U.S. targeted Nazi Germany’s oil infrastructure, according to Warren.

Warren said the strikes going on today in eastern Syria against the oil refineries require “replacement parts that ISIS doesn’t have” and parts that, if ordered, could be tracked by the coalition.

“We wanted them broken longer,” said Warren when asked why the strikes did not occur earlier.  Warren said strikes in the past year produced damage to infrastructure that was “easy to replace.”

A senior military source told Fox News Emwazi was being tracked by the drone for most of the day Thursday while he met with other people. The source said the strike took place shortly after Emwazi came out of a building in Raqqa, when he was "ID'd and engaged."

Sky News, citing sources inside Raqqa, reported that Emwazi was badly hurt in the air strike but still alive when he was brought to the hospital there. Later, however, the same sources said the hospital was sealed off to the public. Locals say the hospital is usually closed when an ISIS figure is killed, which allows the group to go on social media and claim he is still alive.

A representative of the Syrian Observatory for Human Rights told the Daily Telegraph, "a car carrying four foreign Islamic State leaders, including one British jihadi, was hit by U.S. air strikes [near] the governorate building in Raqqa city.

Emwazi, believed to be in his mid-20s, has been described by a former hostage as a bloodthirsty psychopath who enjoyed threatening Western hostages. Spanish journalist Javier Espinosa, who had been held in Syria for more than six months after his abduction in September 2013, said Emwazi would explain precisely how the militants would carry out a beheading.

Those being held by three British-sounding captors nicknamed them "the Beatles" with "Jihadi John" a reference to Beatles member John Lennon, Espinosa said in recalling his months as one of more than 20 hostages.

In the videos, a tall masked figure clad in black and speaking in a British accent typically began one of the gruesome videos with a political rant and a kneeling hostage before him, then ended it holding an oversize knife in his hand with the headless victim lying before him in the sand.

A counterterror analyst told Fox News that Emwazi became so sought-after following his appearances in the beheading videos that he was shunned by ISIS leadership. The analyst said Emwazi had become the "Typhoid Mary" of the terror group, noting that his presence had prompted airstrikes on meetings, buildings, and other commanders.

British Prime Minister David Cameron said Friday the drone action was "a strike at the heart" of ISIS, as well as "an act of self-defense" and the right thing to do.

Cameron said Britain has been "working, with the United States, literally around the clock to track him down."

"This was a combined effort," he said. "And the contribution of both our countries was essential."

Secretary of State John Kerry told reporters in Tunisia Friday that extremists “need to know this: Your days are numbered, and you will be defeated.”

Sotloff’s parents, Art and Shirley Sotloff, responding to the reports that Emwazi was killed issued a statement that said, “This development doesn’t change anything for us; it’s too little too late. Our son is never coming back.”

“His death does not bring Jim back,” they said. “If only so much effort had been given to finding and rescuing Jim and the other hostages who were subsequently murdered by ISIS , they might be alive today.”

Haines’ daughter, Bethany Haines, told Sky News Friday that she felt an 'instant sense of" relief" when she heard Emwazi may have been killed. She said her feeling was because of "'knowing he wouldn't appear in any more horrific videos."

Emwazi was identified as "Jihadi John" last February, although a lawyer who once represented Emwazi's father told reporters that there was no evidence supporting the accusation. Experts and others later confirmed the identification.

Emwazi was born in Kuwait and spent part of his childhood in the poor Taima area of Jahra before moving to Britain while still a boy, according to news reports quoting Syrian activists who knew the family. He attended state schools in London, then studied computer science at the University of Westminster before leaving for Syria in 2013. The woman who had been the principal at London's Quintin Kynaston Academy told the BBC earlier this year that Emwazi had been quiet and "reasonably hard-working."

Officials said Britain's intelligence community had Emwazi on its list of potential terror suspects for years but was unable to prevent him from traveling to Syria. He had been known to the nation's intelligence services since at least 2009, when he was connected with investigations into terrorism in Somalia.

The beheading of Foley, 40, of Rochester, New Hampshire, was deemed by IS to be its response to U.S. airstrikes. The release of the video, on Aug. 19, 2014, horrified and outraged the civilized world but was followed the next month by videos showing the beheadings of Sotloff and Haines and, in October, of Henning.