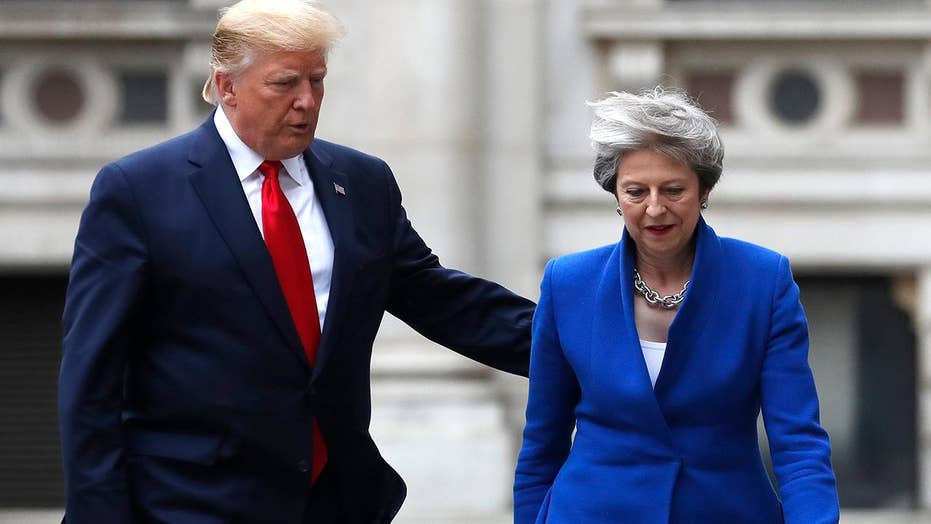 President Trump and U.K. Prime Minister Theresa May deliver statements on their alliance, global threats, trade and the anniversary of D-Day at a joint news conference in the Foreign Commonwealth Office Courtyard.

London cops herded a small group of Trump supporters into a Trafalgar Square pub Tuesday after they were surrounded by demonstrators chanting “Nazi scum off our streets.”

Clashes between pro and anti-Trump protesters were reported on the second day of the president’s state visit to the U.K.

Police said they barricaded about 20 pro-Trump supporters inside the Lord Moon of the Mall pub for their own safety, according to The Independent which reported no arrests.

The 'Trump Baby' blimp is inflated in Parliament Square in central London as people start to gather to demonstrate against the state visit of President Donald Trump, Tuesday. (AP Photo/Matt Dunham)

A pro-Trump Londoner named John, who was sporting a “Make America Great Again” cap, told the outlet: “As a president, he has a right to be here. It is a matter of free speech. These protesters are undemocratic."

Scotland Yard said that 3,182 of its officers were deployed to police the protests.

Thousands of anti-Trump protesters brought central London to a standstill, but the number was far fewer than organizers anticipated, the Daily Mail reported.

Organizers blamed “working Tuesday” in downgrading the number of protesters expected from 250,000 to 75,000 according to the Mail.

Trump got a sight of the infamous 20-foot Trump Baby blimp at Parliament Square as his limousine and motorcade made their way to 10 Downing Street for a meeting with Prime Minister Theresa May, the Mail reported.

Protesters included Handmaids Against Trump, women dressed in the red cloaks and bonnets reminiscent of characters from Margaret Atwood's "The Handmaid's Tale," which is set in a dystopian, misogynist future America.

The protestors were joined at a rally by leaders of Britain's main opposition party near the gates the street from May's Downing St. office. Police erected barricades to stop protesters marching past the gates of Downing St.

Labour Party leader Jeremy Corbyn, who declined an invitation to Monday's royal banquet for the president, said he was there to “stand in solidarity with those he’s attacked in America, around the world and in our own country,” the Evening Standard reported.

Meanwhile Trump, during his press conference Tuesday with outgoing Prime Minister Theresa May, blasted Corbyn as a "negative force", and confirmed he snubbed him when he requested a meeting.

"I don't know Jeremy Corbyn, never met him, never spoke to him -- he wanted to meet today or tomorrow and I decided I would not do that," Trump said. "I think that he is, from where I come from, somewhat of a negative force. I think people should look to do things correctly as opposed to criticize. I really don't like critics as much as I like and respect people who get things done."

At Trafalgar Square, many paused to photograph a robotic likeness of Trump sitting on a golden toilet, cell phone in hand. The robot caught the attention of passers-by with its recitation of catchphrases including "No collusion" and "You are fake news."

"It's 16 feet high, so it's as large as his ego," said Don Lessem from Philadelphia, who built the statue from foam over an iron frame and had it shipped by boat across the Atlantic.

Lewis Metcalfe, 28, from Richmond in North Yorkshire, said he took a day off work to travel to London and offer “a difference of opinion,” the Evening Standard reported.

“I’m obviously going to be a minority today. I’m not here to troll, to cause a riot or cause disruption,” he said.