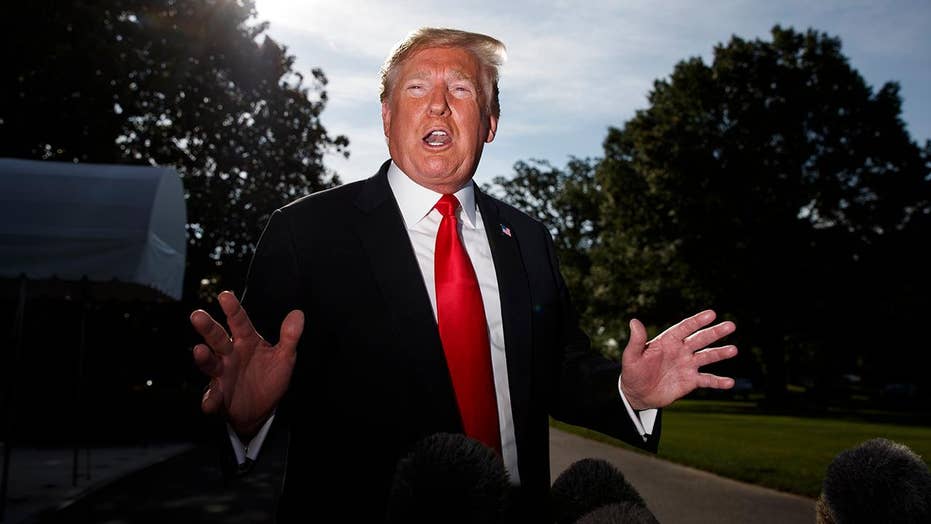 Trump says he may meet with Nigel Farage, Boris Johnson during UK visit

President Trump tells reporters that he is friends with and has a lot of respect for the two U.K. politicians ahead of his state visit in June.

President Trump, in an interview published Saturday, doubled down on his backing of former Foreign Secretary Boris Johnson to replace outgoing Prime Minister Theresa May -- saying the blustery Brexiteer would do “an excellent job.”

“I actually have studied it very hard. I know the different players,” Trump said in an interview with The Sun about the Conservative Party leadership contest. “But I think Boris would do a very good job. I think he would be excellent.”

TRUMP SAYS HE MAY MEET WITH BORIS JOHNSON, NIGEL FARAGE DURING UK VISIT

Trump will visit the U.K. from Monday to Wednesday to commemorate the 75th anniversary of D-Day. It comes at a tumultuous time in British politics, with May due to step down on Friday. That in turn will trigger a contest for the leadership of the party, and whoever wins that will also succeed her as prime minister.

Johnson, who was one of the key campaigners for Britain to leave the European Union in 2016, resigned his post as foreign minister last year over May’s handling of Brexit. Promising that he would take Britain out of the E.U. in October with or without a formal withdrawal agreement, Johnson is currently the bookmakers’ favorite to win the race.

Trump said he believes Boris Johnson would do 'an excellent job' as prime minister. (AP)

Johnson was initially skeptical of Trump in 2015 - once saying "The only reason I wouldn't visit some parts of New York is the real risk of meeting Donald Trump".

But he has since warmed to him, and even suggested last year that Trump would do well handling the Brexit negotiations with Brussels.

Comments like that appear to have won the president’s support.

"I like him. I have always liked him. I don’t know that he is going to be chosen, but I think he is a very good guy, a very talented person,” Trump told The Sun. “He has been very positive about me and our country.”

Trump also brushed off whether Johnson’s reported extra-marital affairs would hurt his chances: “Well, it always matters, but I think that it’s certainly not what it was 20 years ago, and not certainly what it was 50 years ago. I think today it matters much less.”

He was also critical of May’s handling of Brexit -- something he has been outspoken about in the past: “I think that the UK allowed the European Union to have all the cards. And it is very hard to play well when one side has all the advantage.”

“They had nothing to lose. They didn’t give the European Union anything to lose," he said.

Trump said on Thursday that he may meet with both Johnson and Nigel Farage, whose newly-formed Brexit Party won a significant victory last month when it finished first in the country’s European Parliament elections.

“Nigel’s had a big victory, he picked up 32 percent of the vote starting from nothing, and I think they’re big powers over there -- I think they’ve done a good job,” Trump said.

A Downing Street spokesman told the outlet: "Who the President meets during his visit is of course a matter for him."