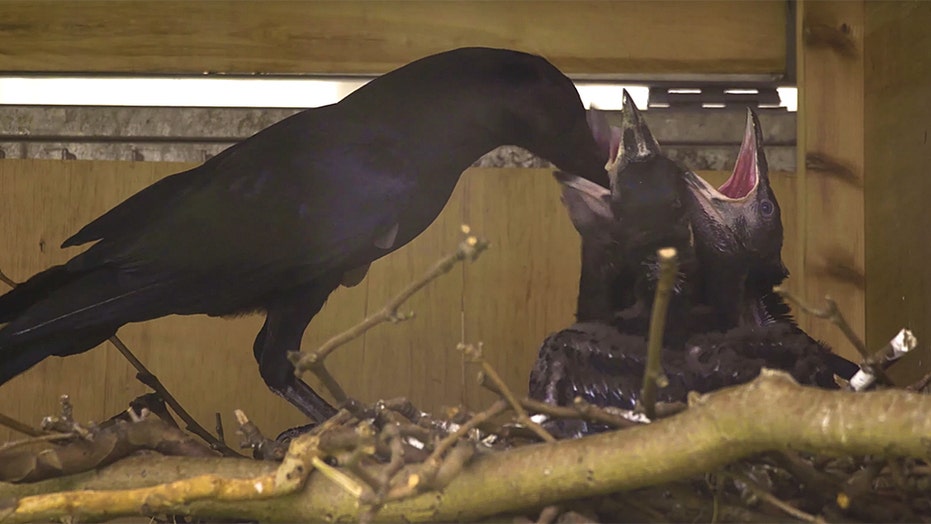 Brexit may have put Britain on the brink, but The Tower of London and the United Kingdom have been saved from prophesied doom after the historic landmark welcomed the birth of new raven chick for the first time in 30 years.

Four healthy chicks were born on April 23 – the feast of St. George, the patron saint in England – to two of the ravens living in the tower.

The new chicks are the first born at the Tower of London in 1989. (Historic Royal Palaces)

Historic Royal Palaces, an independent charity that looks after unoccupied royal palaces in the U.K., said in a statement that the proud parents Huginn and Muninn first arrived at the Tower at the end of last year as part of a new breeding program.

In mid-April, the raven master noticed that they had built a nest.

Soon after, he could hear the sound of chirruping chicks.

“The chicks are currently feeding at least every two hours during this growth development stage,” the statement said. “The parents work as a team: the male Huginn prepares the food and then passes to the mother Muninn, who then gives it to the chicks.”

Yeoman Warder Chris Skaife, the raven master at the Tower of London, told Sky News that it was only this week that he was able to get up close and see for himself the four healthy chicks.

“Having worked with the ravens here at the tower for the last 13 years and getting to know them each, I feel like a proud father!” he said.

The Tower of London is a historic fortress in the heart of London. (istock)

Only one of the chicks – named George or Georgina in honor of their day of birth – will be kept at the tower.

It is not known when the ravens first arrived at the Tower of London, but their presence is protected by legend, the charity said.

At least six have been kept at the historic fortress since the days of King Charles II, who feared the Tower and the kingdom would fall and crumble if they were ever allowed to leave. All ravens are bred in captivity.

New parents, Huginn and Muninn, are the first pair in the Tower of London's raven breeding program. (Historic Royal Palaces)

The breeding program at the London landmark began last year, with the new proud parents being the first.

The new chicks join seven other ravens in addition to their parents and shore up the Tower’s – and kingdom’s – safety for the foreseeable future.