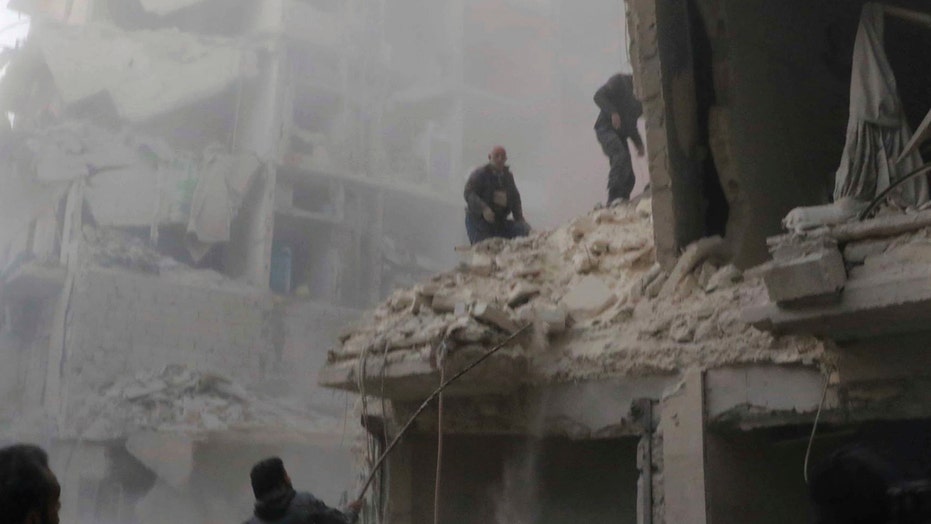 ALEPPO, Syria – The Syrian army on Sunday ordered rebels in Aleppo to leave the city or face "inevitable death," as a series of airstrikes on an opposition-held town elsewhere in the country killed 21 people, including three children.

Pro-government forces have been pushing deeper into besieged eastern Aleppo, taking back neighborhoods the rebels have held since 2012. The opposition has buckled after months of siege and waves of devastating airstrikes, and could soon be driven from Syria's largest city. It would mark their biggest defeat since the conflict began in 2011.

Army spokesman Brig. Gen. Samir Suleiman told The Associated Press in Aleppo that government forces would "continue fighting until they restore stability and security to all neighborhoods." He said the army has already retaken more than half the neighborhoods in eastern Aleppo, and that special forces would lead the battle in the narrow streets of the city's historic district.

The Pan-Arab Al-Mayadeen station, which has correspondents embedded with the Syrian military, aired footage of plumes of smoke and dust rising over the city, as gunfire and artillery echoed in the background.

Government and allied Lebanese, Iraqi, and Iranian fighters swiftly captured the city's northeast in recent days, and the opposition's remaining enclave is collapsing. The U.N. estimates that more than 31,000 people have fled their homes to areas held by the government or Kurdish forces, or deeper into the embattled city.

Elsewhere in Syria, activists reported a series of airstrikes in the opposition-held town of Kafranbel, some 50 miles (80 kilometers) from Aleppo.

The activist-run Kafranbel Media Center published a list of 22 dead from the presumed Russian or Syrian airstrikes.

The Britain-based Syrian Observatory for Human Rights confirmed 21 dead, including members of the local religious police force. It said the airstrikes hit the town's main market.

Russia's military said last month it was resuming airstrikes on the northwestern Idlib province, where Kafranbel is located, and in the central Homs province in support of government forces. Kafranbel is at least 7 miles from the nearest front line, at Jabal Zawiyeh.