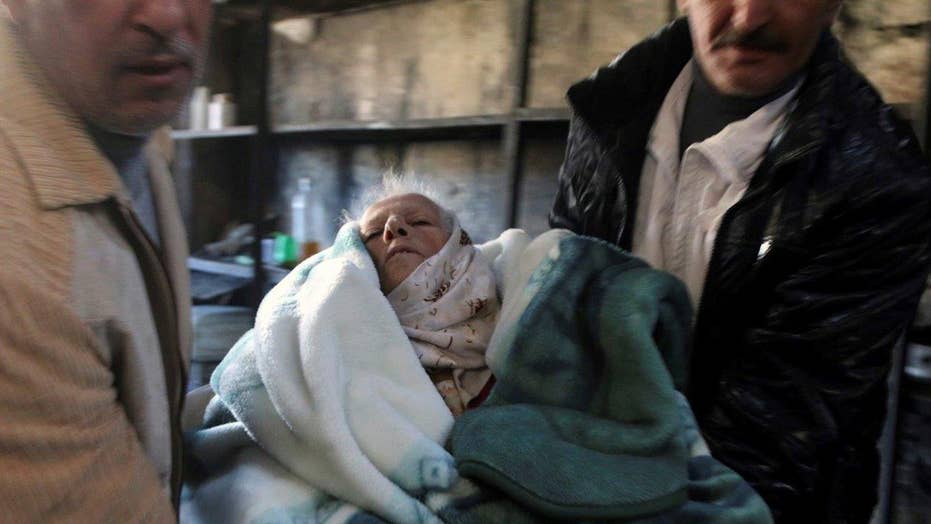 After four years of holding nearly half of the divided city, rebel fighters have been increasingly squeezed into the center of the eastern enclave. Government and allied troops, including Lebanese, Iraqi and Iranian fighters, have concentrated their fight on the northeastern part of the enclave, swiftly taking new districts since their offensive began last week. Another front on the southern outskirts of the city has been slower, as rebel fighters push back government advances there.

The advances have caused massive displacement. The U.N. estimated that more than 31,000 have already fled their homes, either to government or Kurdish areas, or deeper into the besieged enclave. The fighting has also intensified the rebel shelling of government-held areas in Aleppo.

The state broadcaster al-Ikhbariya said "precise operations" by government and allied troops aim to rout out "terrorists," which is how the government refers to all armed opposition groups.

The sound of war prevailed in the city early Saturday. Warplanes made several runs overhead, drawing what appeared to be rebel machine gun fire toward the aircraft.

The Russian Interfax news agency report quoted an unnamed Syrian military official as saying that a light ground attack aircraft, L-39 jet, was shot down near Aleppo, and its crew was killed. The opposition Britain-based Syrian Observatory for Human Rights, which relies on a network of activists on the ground, said two pilots were killed when rebel fighters targeted the aircraft as it approached Aleppo airport to the east of the city.

Asked about reports of the downed plane, Syrian army spokesman Brig. Gen. Samir Suleiman said "we have no such information about such an incident and when such things happen the army announces them." He was speaking to reporters in Aleppo.
Suleiman said the Syrian army has regained control of 45-to-50 percent of east Aleppo, and accused insurgents of hiding among civilians.

Syria's Defense Minister and other senior officers visited newly captured areas in Aleppo on Saturday, according to state-run media.

To the south of the city, government cannons could be heard firing toward rebel-held areas.

Residents in eastern Aleppo also reported intense shelling in al-Sukkari neighborhood on the southern edge of the enclave, where many of the newly displaced have sought refuge.

"The noose is tightening quickly," said Mohammed Abu Jaafar, a medical official in besieged eastern Aleppo. "Our resources are also running low and beginning to disappear."

The bombings Saturday came hours after government troops made new advances on eastern parts of the enclave, including in Tariq al-Bab and al-Khaterji districts. State media reported that government and allied troops have moved in on new neighborhoods, pushing one kilometer (0.6 mile) deeper into the enclave from the far east.

The new advances tighten the government's grip on the enclave and reduce the territory the rebels hold by more than half, according to the Observatory.

The new advances also secure the airport road east of Aleppo, leading to the city's international airport and a military airbase. The pan-Arab Mayadeen TV station said intense bombing in eastern Aleppo was designed to ensure rebels have been cleared from the airport road.

Moscow, a main backer of the Syrian government, says its warplanes haven't bombed Aleppo since Oct. 18. But the Russian military has helped fend off rebel attempts to break the siege of the city.

"We and the Russians are allies and everything that is happening is coordinated between Russian and Syrian leadership," said Syrian army spokesman Suleiman.

Russian Foreign Minister Sergey Lavrov said Moscow is ready to hold quick talks with the U.S. "'to ensure the withdrawal of all rebels without exception from eastern Aleppo, ensure humanitarian supplies to the city residents and the restoration of normal life in eastern Aleppo."

Lavrov and U.S. Secretary of State John Kerry will meet in Geneva early next week. After their meeting in Rome Friday, Lavrov said Kerry gave him Washington's proposals for settling the situation in Aleppo, which he described as conforming to Russia's longtime offers. Lavrov said Moscow is ready to immediately send its experts to Geneva for talks with the U.S. to coordinate.