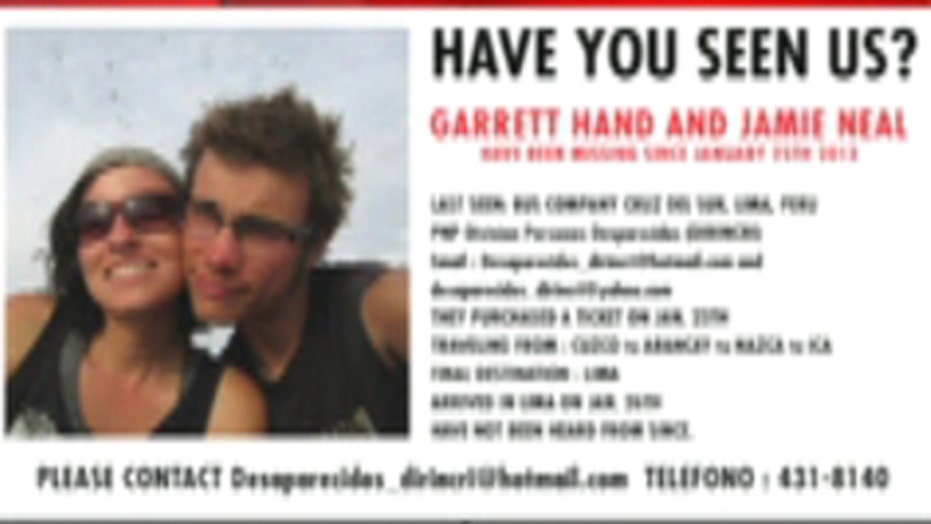 The U.S. State Department is now assisting in the search for an American couple who disappeared in January during a biking trip in Peru.

Jamie Neal and Garrett Hand, both from the San Francisco area, left for Peru in December and were last heard from on Jan. 25, Fox 40 reports.

Neal has stopped posting pictures of the trip on Facebook and Hand no longer answers his cellphone.

“Until someone shows me proof that she’s not missing, I don’t believe it,” Jennifer Neal, one of Jamie’s sisters, told Fox 40.

The couple was last seen on Jan. 26 taking a bus from Cusco to Lima and then getting in a cab, KTVU reports.

The U.S. State Department has made a poster of Neal and Hand, while the U.S. Embassy in Peru's website posted a travel warning for Americans.

The warning, which was posted on Feb. 13, is about a potential kidnapping threat.

“The Embassy has received information that members of a criminal organization may be planning to kidnap U.S. citizen tourists in the Cusco and Machu Picchu area,” the statement said. “Possible targets and methods are not known and the threat is credible at least through the end of February 2013.”

The family says the U.S. Embassy in Lima, as well as Peruvian authorities, is helping to look for the couple and the embassy is in contact with their families.