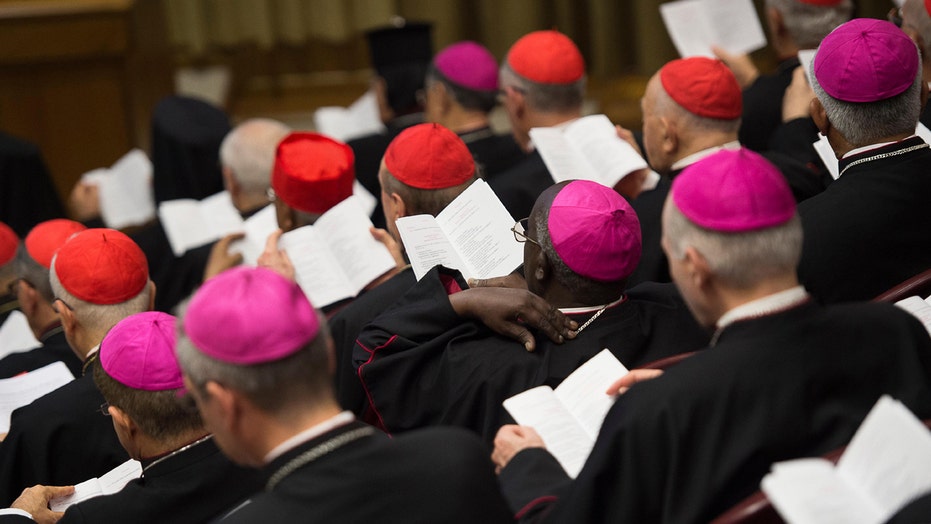 Bishops gather at the Vatican for meeting with the pope

Meeting to focus on saving the institution of marriage

Pope Francis on Monday told a contentious gathering of the world's bishops on family issues to put aside their personal prejudices and have the courage and humility to be guided by the "surprises" of God.

Francis told 270 cardinals, bishops and priests that the three-week synod isn't a parliament where negotiations, plea bargains or compromises take place. Rather, he said, it's a sacred, protected space where God shows the way for the good of the church.

The bishops are debating how the church can better care for Catholic families at a time when marriage rates are falling, divorce is common and civil unions are on the rise. The main sticking points include how the church should welcome gays and divorced and civilly remarried Catholics.

Conservatives have been insisting that the gathering strongly reassert church doctrine on homosexuality and the indissolubility of marriage. Progressives are seeking a more merciful approach to a host of family problems, including whether civilly remarried Catholics can receive the sacraments.

Despite Francis' call for a free and open debate, Hungarian Cardinal Peter Erdo, a key synod organizer who delivered the introductory remarks, made clear that there is not much to discuss on the divorce-remarried issue since church teaching is clear forbidding the sacraments for these Catholics.

In his opening welcome Monday, Francis repeated a phrase he used in his homily a day earlier that the church's law cannot become an impediment to its mission of mercy.

"God created law and the Sabbath for man, not vice versa," he said.

He called for the bishops to show apostolic courage, evangelical humility and faithful prayer over the next three weeks.

The courage, he said, was needed since the church's attitudes can, "despite good intentions, distance people from God" and make "Christian life a museum of memories."

He said humility was needed so bishops empty themselves of "their own beliefs and prejudices to listen to their brother bishops and fill themselves with God."

"A humility that doesn't point the figure against another to judge them but to extend a hand to help them up without ever feeling superior to them," he said.

And he called for prayer to hear the "soft voice of God that speaks in silence."

Oct. 5, 2015: Pope Francis leaves at the end of a morning session of the Synod of bishops, at the Vatican. (AP Photo/Alessandra Tarantino)

The run-up to the synod has been particularly contentious: Conservatives have been mounting a campaign to insist that Catholic doctrine be strongly reasserted, particularly on the indissolubility of marriage and impossibility of civilly remarried Catholics to receive Communion without an annulment. Progressives have been plotting their own strategy to try to find wiggle room in pastoral practice.

Cardinal Andre Vingt-Trois cautioned that anyone expecting changes to doctrine, or even general recommendations to the pope to emerge from the synod would be sorely disappointed. But he suggested that the issue on Communion for the civilly remarried comes down to one of individual conscience.

"If there's a path to be opened, it's one that takes into consideration a personal commitment, a personal freedom," he said.

Catholics who divorce and want to remarry in the church must first obtain an annulment, a ruling from a church tribunal that their first marriage was invalid. Otherwise, those who remarry in civil ceremonies are considered to be committing adultery and cannot receive Communion, a condition that has led generations of Catholics to feel shunned by their church.

Francis has upheld church teaching on marriage but has sought a more merciful approach, insisting that these remarried Catholics be fully part of the life of the church. Progressive prelates led by German Cardinal Walter Kasper have called for a process by which a bishop could accompany these remarried Catholics on a path of penance that, over time and on a case-by-case basis, could lead to them receiving the sacraments.

In a bid to take some of the divisiveness out of the debate, Francis passed a law over the summer making it easier for Catholics to get an annulment - a change conservatives have criticized as tantamount to "Catholic divorce."

Vingt-Trois praised the new annulment process as a "precious" initiative that should help bishops "better put in place paths of mercy."

But Erdo, in a keynote speech addressing the main themes for the synod, made clear that Communion for civilly remarried Catholics is effectively impossible unless they abstain from sex - as the church's teaching currently states.

Erdo said his remarks were informed by responses from bishops around the world who had gotten in touch even after the Vatican drafted the working paper for the meeting, suggesting a hardening of positions against any change in pastoral practice.

That said, he allowed for developments.

"The synod begins today," he said. "It's not like we have answers to all the questions."