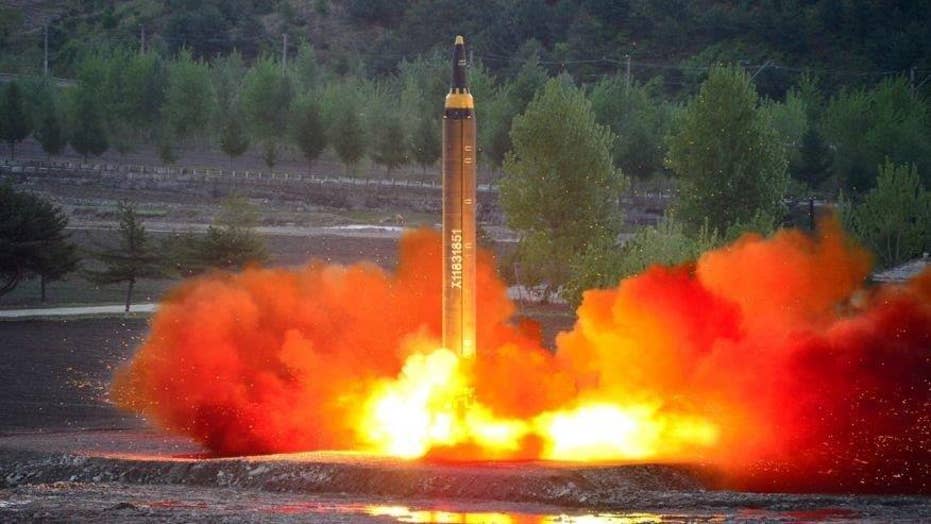 U.S. and South Korean officials announced on Sunday that North Korea fired a medium-range missile, in the latest ballistics test for a country speeding up its development of nuclear weapons and missiles.

U.S. Pacific Command said it tracked the missile until it landed into the sea.

South Korea’s Office of Joint Chiefs of staff released a statement Sunday afternoon stating that the launch came from an area near Pukchang, in South Phyongan Province, and flew eastward about 310 miles.

The White House said it was aware that North Korea had launched a midrange ballistic missile.

White House officials traveling in Saudi Arabia with President Donald Trump said the system, which was last tested in February, has a shorter range than the missiles launched in North Korea's most recent tests.

North Korea tested a longer-range missile last weekend, which experts say was a significant advance for a weapons program that aims at having a nuclear-tipped missile that can strike America. The test triggered a new U.S.-backed push for a fresh round of U.N. sanctions against the North.

On Friday North Korea’s deputy U.N. envoy said that the country will continue to strengthen its nuclear program as a necessary measure needed to counter U.S. aggression.

Kim In Ryong told reporters that the U.S.’ hostile policy towards North Korea is “the root of all problems” and that regardless of U.S. sanctions, Pyongyang would never abandon its “nuclear deterrence for self-defense and pre-emptive strike capability.”

U.S. Defense Secretary Jim Mattis said on Friday at the Pentagon that North Korea is clearly not complying with pressure from the international community.

He stressed the need for a peaceful resolution, stating that a military solution to the standoff with North Korea over its nuclear weapons program would be "tragic on an unbelievable scale."