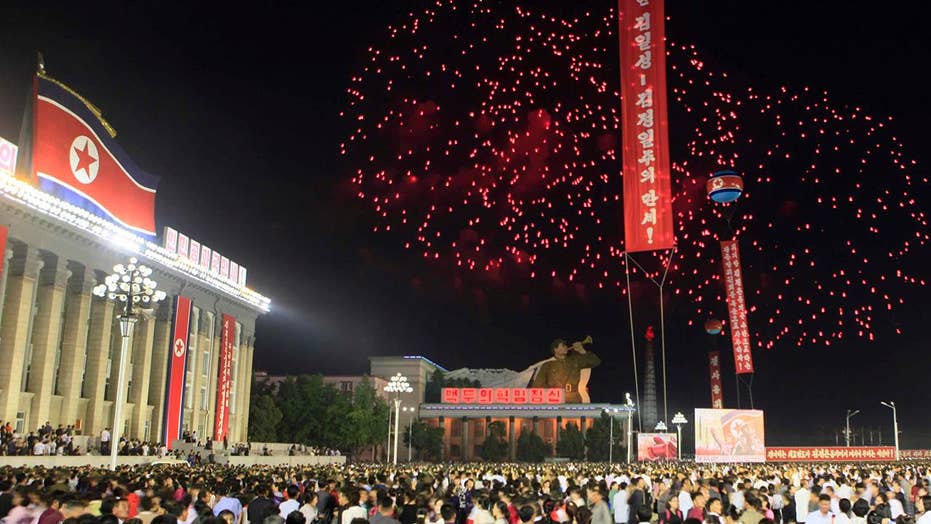 Fireworks blazed through the sky in North Korea's capital Wednesday night as thousands of people attended a mass rally to celebrate the regime’s weekend nuclear test and rally speakers vowed to end “the destiny of the gangster-like U.S. imperialists.”

The scientists responsible for developing the supposed hydrogen bomb that was detonated Sunday were welcomed to streets of cheering citizens leading to Pyongyang’s Kim Il Sung Square. Photos and a video released by the official Korean Central News Agency showed thousands more lining up in the capital.

“[North Korea’s military] will put an end to the destiny of the gangster-like U.S. imperialists through the most merciless and strongest preemptive strikes if they and the hordes of traitors finally ignite a war,” rally speakers told attendees.

North Korea claimed Sunday’s blast was a “perfect success” and its largest detonation to date. Experts estimated the explosion to have a yield of at least 100 kilotons – four to five times more powerful than the explosion in Nagasaki, Japan in 1945.

This is the sixth nuclear test North Korea has conducted since the first one carried out in 2006. Leader Kim Jong Un has continued to make huge strides in the country’s nuclear and missile program since taking power in 2011 following his father’s death.

The successes have been largely credited to the scientists Kim Jong Un brought in to identify and fix problems in his missiles and nuclear devices. Kim Jong Sik is one of the scientists leading the missile program who climbed up the North Korean ranks after he helped successfully launch a rocket in December 2012. The scientist was not present for Sunday’s nuclear blast, but had been next to Kim for the country’s first ICBM tests in July, Michael Madden, director of North Korea Leadership Watch, told Fox News.

Hours before the nuclear test, state-run media released photos showing Kim and top nuclear scientists inspecting what appeared to be a two-stage thermonuclear weapon. The size and peanut-like shape of the weapon fits relatively well with known designs that could plausibly be bolted into a re-entry vehicle and paired with a ballistic missile capable of reaching the U.S. mainland.

Han Tae Song, the ambassador of North Korea to the U.N. in Geneva, said earlier this week more “gift packages” – the rogue regime’s way of describing missile and nuclear tests – will be headed towards the U.S. if sanctions and international pressures to end its nuclear program continued.

North Korea released a series of threats through KCNA saying U.S. will "will face unprecedentedly resolute counteraction" if new sanctions are imposed.

"If the U.S. adheres to sanctions and pressure…it will face unprecedentedly resolute counteraction it can not hold control of," the statement read.

"Japan should clearly understand its position and stop indecent deed of acting as the U.S. cat's paw," it continued.