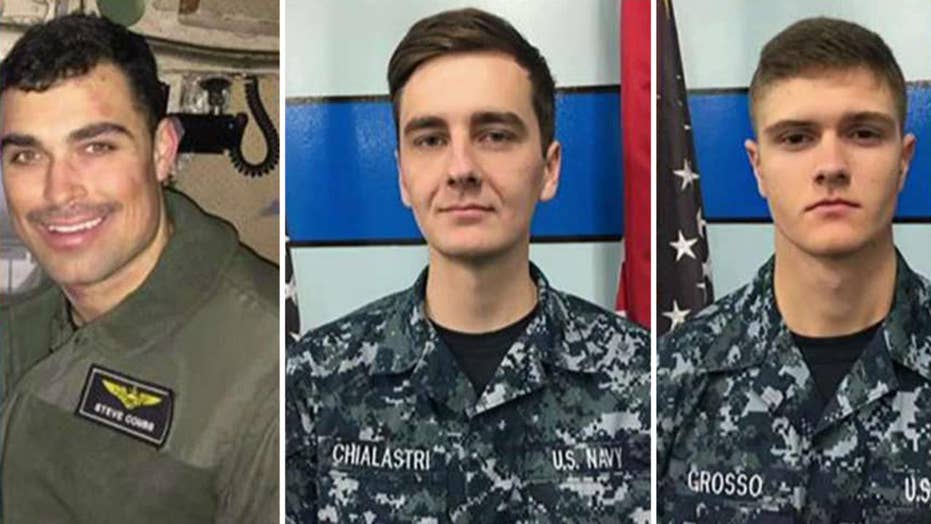 Plane crashed off the coast of Japan.

The U.S. Navy identified the three sailors lost after a Navy plane crashed in the Philippine Sea shortly after takeoff from Japan on Wednesday.

“Our thoughts and prayers are with the families of these Sailors,” Vice Adm. Phil Sawyer, commander of U.S. Seventh Fleet, said.  “Their service and sacrifice will be lasting in Seventh Fleet and we will continue to stand the watch for them, as they did bravely for all of us.”

Combs, a Florida native, was assigned to “Providers” of Fleet Logistics Support Squadron and was part of the carrier Air Wing Five while aboard the Ronald Reagan, the Navy stated.

Chialastri, from Louisiana, was previously assigned to USS America, the “Pro’s Nest” in Jacksonville, Fla. and Center for Security Forces Detachment Kittery Point in NH.

All three men were awarded with the National Defense Ribbon.

“The thoughts and prayers of the entire team onboard Ronald Reagan go out to the families and friends of our fallen shipmates,” Capt. Michael Wosje, Commander, Carrier Air Wing Five (CVW 5) said. “We are thankful for our professional search and rescue teams and their incredible bravery. The entire Navy team is working together to investigate the cause of this mishap and we will remain focused on our mission to operate forward in a safe and professional manner to ensure peace and stability in the Indo-Asia-Pacific region."

The C-2A "Greyhound" cargo plane was carrying 11 sailors before it crashed into the Philippine Sea while en route from Japan to the aircraft carrier USS Ronald Reagan. Eight sailors were rescued in good condition by U.S. Navy helicopters.

On Thursday, the Navy announced it had suspended the search for the three sailors.

Earlier this month, the aircraft carrier USS Ronald Reagan joined two other aircraft carriers off the Korean Peninsula for the first time since the late 60s in a show of force to North Korea. At the time of the plane crash, the carrier was training with the Japanese military.

This is latest accident for the Navy's Japan based 7th fleet and comes after two separate collisions at sea this summer involving guided-missile destroyers USS Fitzgerald and USS John S. McCain, which killed 17 sailors. During the weekend, another US destroyer bumped into a Japanese tugboat after the tug lost propulsion. Nobody was injured.

Fox News' Lucas Tomlinson and Ben Brown and The Associated Press and contributed to this report.