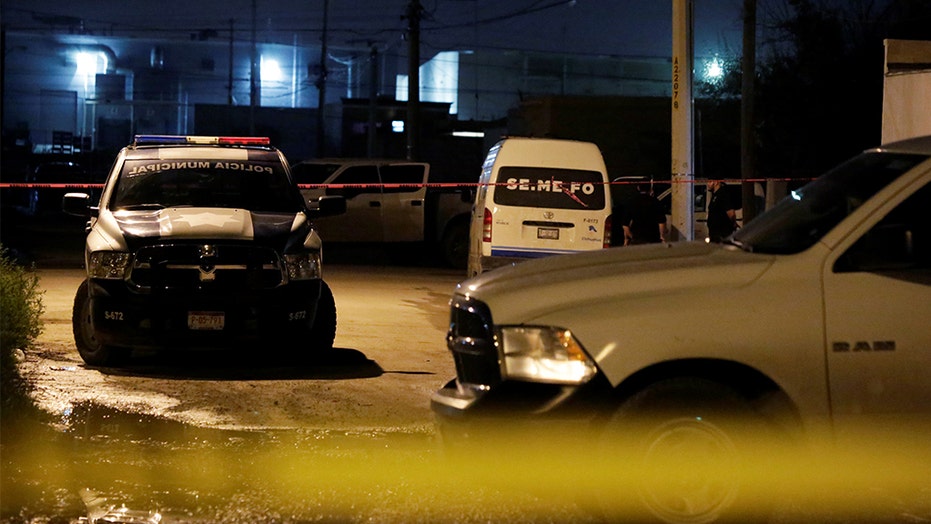 A National Geographic journalist was recovering Saturday after being shot in the leg in Ciudad Juarez, Mexico, while interviewing a purported drug dealer for a story about violence in the border city.

The incident involving an unidentified American journalist happened Friday night at an address where officials said two drug traffickers were also killed in April, according to reports. Ciudad Juarez is located about 10 miles south of El Paso, Texas.

The subject of the interview was killed and another suspected drug dealer died after being taken to a hospital.

Police vehicles and a yellow police line cordon are pictured at a crime scene after a National Geographic journalist was shot in the leg late Friday while interviewing an alleged drug dealer. (REUTERS/Jose Luis Gonzalez)

Investigators said the men were targeted by four assassins who showed up and opened fire, KTSM-TV reported. The attackers appeared to be female, according to Chihuahua Deputy Attorney General Jorge Nava Lopez.

The reporter, who was with three other journalists, did not alert the police that they were going to be in the area and they were not being guarded at the time of the interview, KTSM added.

Lopez said the state was in possession of the journalists' equipment to determine whether they recorded the attack, according to the station.

The Associated Press quoted Nava as saying the journalist appeared to have been caught in an ambush that resulted in a shootout.

Nava said the plan to interview members of organized crime was “obviously risky.”

The journalist and crew left Mexico for El Paso on Saturday after investigators interviewed them.

National Geographic representatives did not immediately respond to a request for comment.

Mexico is considered the most dangerous country for journalists in the Western Hemisphere.