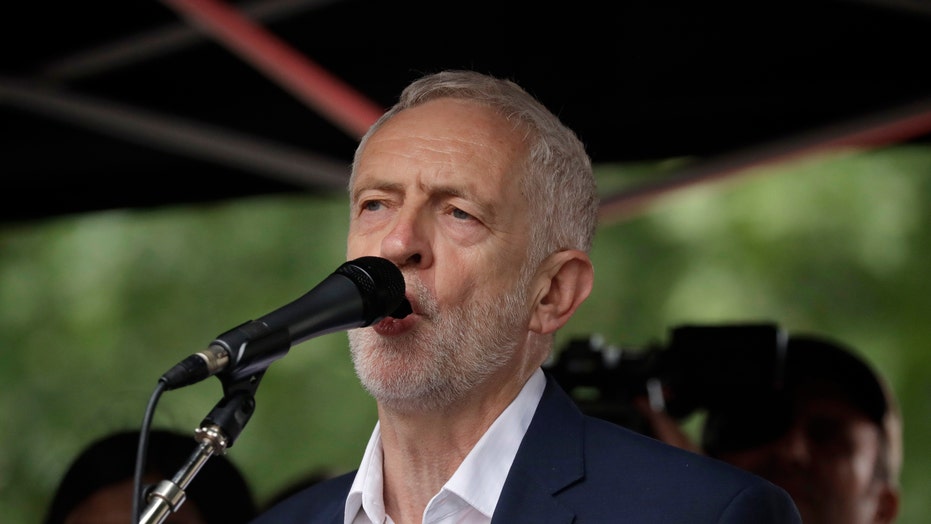 Britain's top left-winger is calling for anti-Brexit members of the governing Conservative Party to back him in ousting new Prime Minister Boris Johnson – and install him as a temporary replacement to thwart plans to get the U.K. out of the European Union in October.

Labour Party leader Jeremy Corbyn wrote to leaders of other parties and backbenchers to lay out his plan to stop Johnson, who became prime minister last month, from taking the U.K. out of the E.U. in October without a formal withdrawal agreement.

By doing so, he is hoping to corral “Remain” forces from across Parliament behind his banner in stopping Brexit. By his vision, he would table a vote of no confidence in the Johnson government.

Labour Party leader Jeremy Corbyn wrote to leaders of other parties and backbenchers to lay out his plan to stop Johnson, who became prime minister last month, from taking the U.K. out of the E.U. in October without a formal withdrawal agreement. (AP)

“Following a successful vote of no confidence in the Government, I would then, as Leader of the Opposition, seek the confidence of the House for a strictly time-limited temporary Government with the aim of calling a General Election, and securing the necessary extension of article 50 to do so,” he said, referring to the mechanism by which Britain would leave the E.U.

He added that during the eventual general election, his party would campaign on a second referendum, this time on the terms of leaving the E.U. – as well as an option to remain in the bloc.

The move marks the latest in an increasingly desperate set of strategies from those committed to relitigating the 2016 referendum, as they face an apparently hard deadline of October 31 to thwart Britain’s exit.

The Brexit Party’s Nigel Farage accused Corbyn of attempting “a coup against the British people.”

“I’m tired of hearing we did not vote for a clean break Brexit. 498 MPs voted for that option when they triggered Article 50,” he tweeted.

Some members of his own party weren’t impressed either. One senior Labour Party MP told The Times of London that the plan was “bonkers.”

BRITISH FOREIGN SECRETARY: UK WILL LEAVE EU WITHOUT A DEAL IF NECESSARY, BY END OF OCTOBER

“It’s bonkers and electorally futile. It is doomed to failure,” the member said. “His commitment to a second referendum will be very unpopular in Leave-voting Labour constituencies. The position is already occupied by the Liberal Democrats.”

Others, however, appeared open to the proposal. The Times reported that a handful of Tory MPs who oppose no-deal Brexit wrote to Corbyn and said they agree “that our common priority should be to work together in parliament to stop a no-deal Brexit and welcome your invitation to discuss the different ways this might be achieved.”

Britain was due to leave the bloc earlier this year, but then-Prime Minister Theresa May delayed the departure multiple times as she fought to get her withdrawal agreement – negotiated with E.U. leaders – through Parliament. After successive defeats, she resigned and was replaced by Johnson, who has repeatedly promised to get Britain out in October whether or not a deal has been negotiated.

"The prime minister has appointed a much more united and disciplined cabinet which is going to get this Brexit process done by the end of October -- preferably with a deal with our E.U. partners," Foreign Secretary Dominic Raab told Fox News' Bret Baier last week. "But if they refuse to move... then we'll leave without a deal.

But while Corbyn’s plan may be ambitious, Johnson’s government has a very slim majority in Parliament of just one seat, meaning that even a small rebellion of backbenchers could bring down the government.