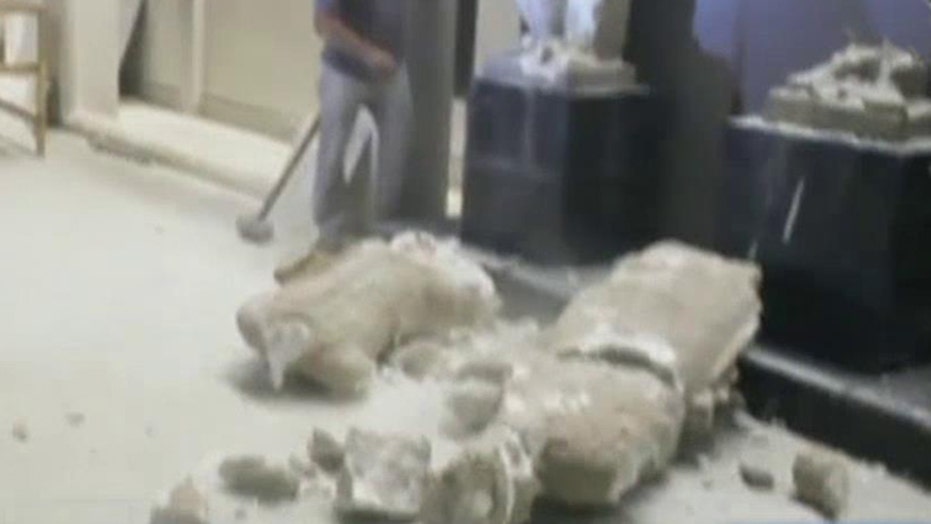 Islamic State militants were reportedly demolishing another ancient archaeological site in Iraq on Saturday, the latest in a series of efforts to rid what the terror group says are symbols that promote idolatry.

An official with the ministry of tourism and antiquities' archaeological division in Mosul told The Associated Press that multiple residents living near Hatra heard two large explosions Saturday morning, then reported seeing bulldozers begin demolishing the site. He spoke anonymously for fear of reprisal.

Saeed Mamuzini, a Kurdish official from Mosul, told the AP that the militants had begun carrying away artifacts from Hatra as early as Thursday and on Saturday, began to destroy the 2,000-year-old city.

Hatra, located 68 miles southwest of the city of Mosul, was a large fortified city during the Parthian Empire and capital of the first Arab kingdom. The ancient city, a UNESCO world heritage site, is said to have withstood invasions by the Romans in A.D. 116 and 198 thanks to its high, thick walls reinforced by towers.

The Sunni extremist group, also known as ISIS, or ISIL, has been campaigning to purge ancient relics they say promote idolatry that violates their fundamentalist interpretation of Islamic law. A video they released last week shows them smashing artifacts in the Mosul museum and in January, the group burned hundreds of books from the Mosul library and Mosul University, including many rare manuscripts.

On Friday, the group looted artifacts from Nimrud, a 3,000-year-old city in Iraq, and bulldozed it in a move United Nations Secretary General Ban Ki-Moon declared "a war crime."

The late 1980s discovery of treasures in Nimrud's royal tombs was one of the 20th century's most significant archaeological finds. After Iraq was invaded in 2003, archaeologists were relieved when the treasures were found hidden in the country's Central Bank — in a secret vault-inside-a-vault submerged in sewage water.

Suzanne Bott, the heritage conservation project director for Iraq and Afghanistan in the University of Arizona's College of Architecture, Planning and Archaeology, worked at Nimrud on and off for two years between 2008 and 2010. She helped stabilize structures and survey Nimrud for the U.S. State Department as part of a joint U.S. military and civilian unit.

She described Nimrud as one of four main Assyrian capital cities that practiced medicine, astrology, agriculture, trade and commerce, and had some of the earliest writings.

"It's really called the cradle of Western civilization, that's why this particular loss is so devastating," Bott said. "What was left on site was stunning in the information it was able to convey about ancient life.

"People have compared it to King Tut's tomb," she said.

Iraq's national museum in Baghdad opened its doors to the public last week for the first time in 12 years in a move Prime Minister Haider al-Abadi said was to defy efforts "to destroy the heritage of mankind and Iraq's civilization."

ISIS has imposed a harsh and violent version of Islamic law in the territories it controls and has terrorized religious minorities. It has released gruesome videos online showing the beheading of captives, including captured Western journalists and aid workers.

A U.S.-led coalition has been striking the group since August, and Iraqi forces launched an offensive this week to try to retake the militant-held city of Tikrit, on the main road linking Baghdad to Mosul.

Jack Green, chief curator of the Oriental Institute Museum at the University of Chicago and expert on Iraqi art, said Thursday that ISIS seems bent on destroying objects they view as idols representing religions and cultures that don't conform to their beliefs.

"It's the deliberate destruction of a heritage and its images, intended to erase history and the identity of the people of Iraq, whether in the past or the present," Green said. "And it has a major impact on the heritage of the region."

Green noted that in many of these attacks on art, pieces that can be carried away are then sold to fund the IS group, while the larger artifacts and sculptures are destroyed at the site.