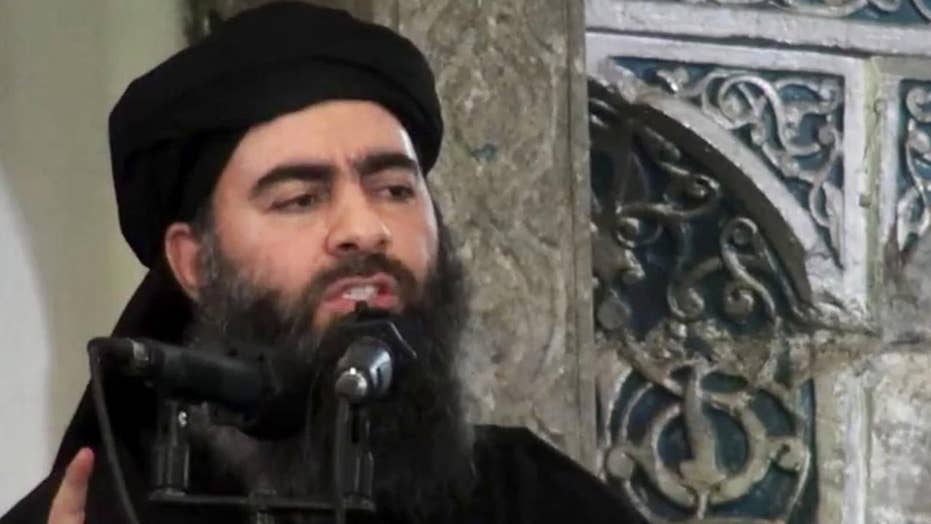 A cryptic new audio message purported to be from Abu Bakr al-Baghdadi appears to prove the shadowy ISIS strongman has cheated death yet again, despite Moscow's claims he was killed in battle.

The 46-minute recording, released by Al-Furqan news organization, was the first time the world has heard from the jihadist leader since November 2016, when the last speech was released. It’s unclear when the recording was created.

But there's some evidence it was recorded recently.

Baghdadi referenced North Korea's series of bombastic threats toward the U.S. and Japan, claiming America is "experiencing a global decline in its influence and power," MEMRI Jihad and Terrorism Threat Monitor, a nonprofit organization which translates Arabic, Farsi, Urdu-Pashtu, Dari and Turkish media, said in its analysis of the speech. The ISIS leader then claimed Russia was taking the U.S. spot as a global power.

Texas congressman reacts on 'The Story' to London terror attack

For the majority of the speech, he attempted to appeal to ISIS supporters worldwide.

"Oh soldiers of Islam and caliphate supporters everywhere, intensify the successive attacks, and include the unbelievers' media headquarters and the ideological war centers among [your] targets," a voice believed to be of al-Baghdadi said.

"Continue your jihad and blessed operations, and do not let the Crusaders and apostates enjoy a good life or a pleasant living in the middle of their countries while your brothers are experiencing bombardment, killing, and destruction," he continued.

Several officials and organizations claimed al-Baghdadi had died in the last few months, leaving many to wonder if the terror leader who's escaped numerous assassination attempts had finally been killed. Russian officials in July said it was a “high probability” that the leader died in a Russian airstrike on the outskirts of Raqqa, Syria a month earlier. But there was no body or images to prove the death.

The Syrian Observatory for Human Rights, an organization that has a good record in reporting ISIS news, also claimed in July al-Baghdadi had died, citing a high-ranking ISIS source.

"[We have] confirmed information from leaders, including one of the first rank, in the Islamic State in the eastern countryside of Deir al-Zor," the director of the British-based war monitoring group, Rami Abdulrahman, told Reuters.

But Thursday’s recording of the leader, who has only been seen in public once, seems to show he is alive.

"Do I believe he's alive? Yes," Townsend said. "There are also some indicators in intelligence channels that he's alive."

The emergence of the leader comes more than two months after U.S.-backed Iraqi forces declared “total victory” over ISIS in Mosul. Iraq has taken full control of its second-largest city three years after the extremists were able to seize it in an attempt to build a so-called global caliphate.