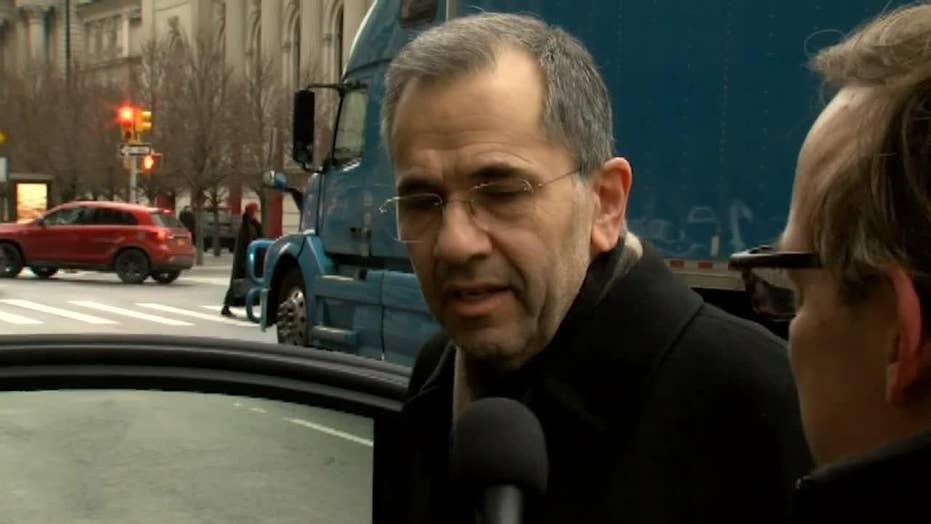 Iran's Ambassador to the United Nations: The US should leave the region

NEW YORK CITY – The Iranian ambassador to the United Nations told Fox News that he has one message for President Trump: The U.S. should get out of Iraq.

As the Trump administration plans to send 5,000 more U.S. troops to the region, Ambassador Majid Takht Ravanchi said that wasn’t a good idea.

“The U.S. should leave the region,” the ambassador said. “It belongs to the people in the region, and I think the sooner the better."

Fox News spoke to the ambassador as he left for work and hurried to his diplomatic sedan.

He would not answer when we told him, "The U.S. says that you are an evil dictatorship."

Iran is trying to muster diplomatic support in the wake of the U.S. airstrike that killed Gen. Qassem Soleimani. A war of words has erupted between President Trump and the regime in Tehran, with Iran threatening to retaliate against U.S. military targets.

Coffins of Gen. Qassem Soleimani and others who were killed in Iraq by a U.S. drone strike, are carried on a truck surrounded by mourners during a funeral procession, in the city of Mashhad, Iran, Sunday, Jan. 5, 2020. Soleimani's death Friday in Iraq further heightens tensions between Tehran and Washington after months of trading attacks and threats that put the wider Middle East on edge. (Mohammad Hossein Thaghi/Tasnim News Agency via AP)

In a letter addressed to the U.N. secretary-general last week, Ambassador Ravanchi called on the U.N. Security Council to condemn the death of Soleimani.

Meanwhile, the United States Mission to the U.N. issued a statement Monday that called out both Russia and China for preventing a council statement condemning the attack against the U.S. Embassy in Baghdad on Dec. 31st.

In it, the U.S. thanked the 27 members of the U.N. that spoke out against the attack on the embassy.

“They clearly recognize the importance of a host country’s obligations under the 1961 Vienna Convention to protect diplomatic and consular premises.”

The U.S. mission also took aim at the Security Council's inaction because of the two veto-wielding members, Russia and China.

"Not allowing the United Nations Security Council to issue the most basic of statements underscoring the inviolability of diplomatic and consular premises once again calls the Council’s credibility into question,” the mission said. “Such expressions of support should not be controversial or warrant courage. As we have demonstrated, we will not tolerate attacks on U.S. personnel and facilities and will respond decisively to protect our interests, citizens, and allies.”

A Security Council diplomat told Fox News that the Russians and Chinese, “didn’t allow the statement to proceed on Saturday morning.”

At the U.N., Monday morning's Security Council meeting centered on Syria, but diplomats were mindful of the Iranian developments.

Outside the U.N. Security Council, Soleimani's death was a topic in the hallways. He is blamed for countless deaths of civilians in Syria, the deaths of 603 American troops in Iraq from Iranian made IED's planted by Tehran's proxies and masterminding Tehran's terror operations for decades.

Both Russia and China criticized the airstrike on Soleimani, as well as the protestors’ previous attack on the U.S. embassy in Baghdad.

“China opposes the use of force in international relations. It’s obvious that the unilateral risk-taking, military actions of the United States violated basic norms of international relations and led to the gravitation of the tension and for China. We urge the United States not to abuse any further use of force,” said Chinese U.N. Ambassador Zhang Jun.

“We now have to talk about territorial integrity, what sovereignty of Iraq [is] about, about the need to de-escalate” said Russian ambassador Vassily Nebenzia, “and to prevent developments going down the drain in the direction of a major conflict.”

A U.S. Army soldier checks his rifle before heading out Saturday, Jan. 4, 2020 at Fort Bragg, N.C., as troops from the 82nd Airborne are deployed to the Middle East as reinforcements in the volatile aftermath of the killing of Iranian Gen. Qassem Soleimani. (AP Photo/Chris Seward)

Another diplomat told Fox News that, presently, there were no calls for a Security Council meeting on the situation in Iran.

Iranian Foreign Minister Javad Zarif is expected to arrive in New York on Thursday to take part in a Security Council debate on upholding the U.N. Charter. Zarif was already slated to come before the recent uptick in tensions.

"And this turbulence is escalating. ... Everywhere we see many people frustrated and angry,” Guterres said. “We see increased social unrest and growing extremism, nationalism and radicalization, with a dangerous advance of terrorism in several areas of the world, notably in Africa. This situation cannot go on."