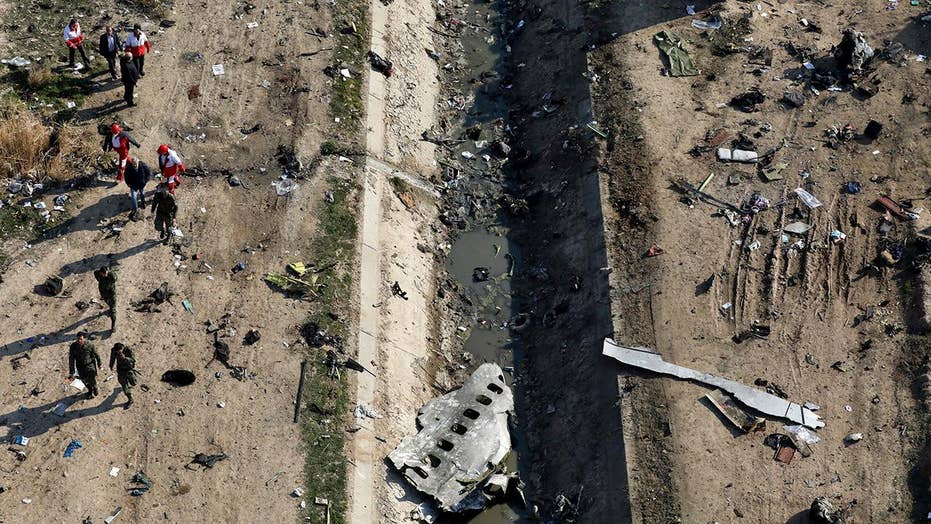 Iran continues to deny that the Ukraine passenger jet was shot down by a missile; Trey Yingst reports from Baghdad.

Iran is continuing to deny that an accidental missile strike took down a Ukrainian passenger plane outside of Tehran this week, and instead is demanding that the U.S. and Canada should “show their findings to the world.”

The defiant stance from the Islamic Republic, which Pentagon and Canadian officials believe mistakenly shot down the jet Wednesday, killing all 176 onboard, comes as Iranian officials have yet to disclose information from the one source that may reveal everything: the aircraft’s black boxes.

“What is obvious for us, and what we can say with certainty, is that no missile hit the plane,” Ali Abedzadeh, head of Iran's national aviation department, claimed during a press conference Friday.

“If they are really sure, they should come and show their findings to the world" in accordance with international standards, he added, referring to the U.S. and Canada.

Pentagon officials told Fox News on Thursday that the Ukraine International Airlines flight, which plunged from the sky in a ball of fire shortly after takeoff, was downed by an Iranian anti-aircraft missile.

"An absolute tragedy," one U.S. official told Fox News. "They just screwed up and it is tragic."

Iran continues to deny that a missile brought down a Ukrainian passenger jet in Tehran and removes wreckage from the crash site before investigators arrive; Jennifer Griffin reports.

The U.S. official told Fox News that a Russian-made SA15 missile, which is part of the Tor surface-to-air missile system, was the kind that brought down the aircraft. The crash happened just hours after Iran fired more than a dozen ballistic missiles targeting two military bases housing American and coalition troops.

Canadian Prime Minister Justin Trudeau, whose country lost at least 63 citizens in the downing, also said Friday that “the evidence indicates that the plane was shot down by an Iranian surface-to-air missile.”

“We have intelligence from multiple sources including our allies and our own intelligence,” he added.

Hassan Rezaeifar, the head of the Iranian team investigating the crash, said recovering data from the black box flight recorders could take more than a month and that the entire investigation could stretch into next year. He also said Iran may request help from international experts if it is not able to extract the flight recordings.

Oleksiy Danilov, the secretary of Ukraine's national security council, said Friday that he doesn't know if the flight data recorders will be handed over to Boeing, the maker of the plane.

"I think rather not than yes, but I think all the countries interested in this situation, all those who suffered, will have access to the black boxes," he said.

Ukraine currently has 45 investigators in Iran examining the plane’s debris. Vadym Prystaiko, the country's foreign minister, said they have been given access to the black boxes and recordings of air-traffic controllers at the Tehran airport. Although investigators have been to the crash site, he said “there are certain pieces that up until this time have not been found or gathered.”

Danilov also noted the collection of DNA samples is almost complete, after which countries can repatriate victims' remains.

In one video, a fast-moving light can be seen through the trees as someone films from the ground. The light appears to be the burning plane, which plummets to the earth as a huge fireball illuminates the landscape.

Someone off-camera says in Farsi: “The plane has caught fire. ... In the name of God, the compassionate, the merciful. God, please help us. Call the fire department!”

Iran's state-run IRNA news agency quoted Foreign Ministry spokesman Abbas Mousavi as saying Friday that Iran "has invited both Ukraine and the Boeing company to participate in the investigations.” He later said a 10-member Canadian delegation was heading to Iran to assist victims' families.

Greg Palkot reports from Kiev, Ukraine on the latest on the investigation into the down passenger jet in Iran.

The NTSB said late Thursday that it would “evaluate its level of participation," but its role could be limited by U.S. sanctions on Iran. U.S. officials have also expressed concern about sending employees to Iran because of the heightened tensions.

Under rules set by a United Nations aviation organization, the NTSB is entitled to participate because the crash involved a Boeing 737-800 jet that was designed and built in the U.S.

A preliminary Iranian investigative report released Thursday said that the airliner pilots never made a radio call for help and that the burning plane was trying to turn back for the airport when it went down.