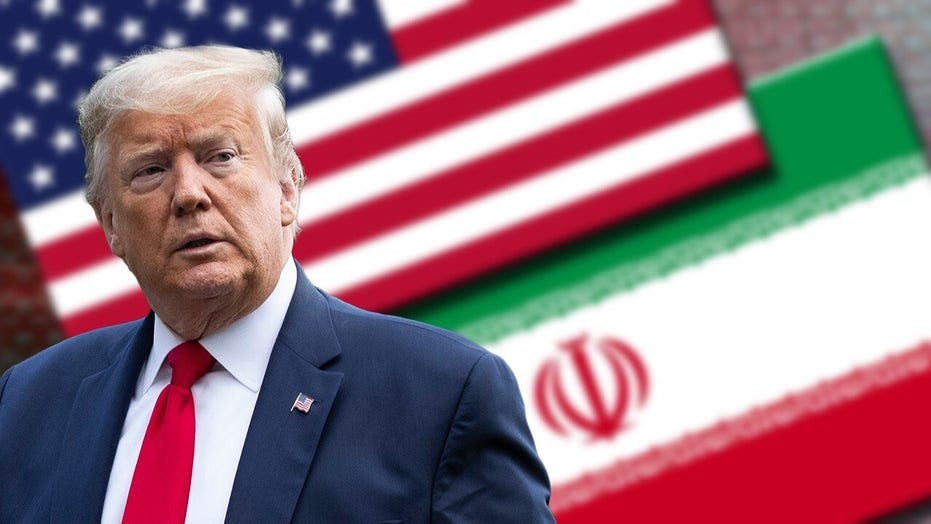 Congressional Republicans are set to unveil another sanctions package against the regime as the International Atomic Energy Agency warns Iran is continuing to enrich uranium; Trey Yingst reports.

Iran appears to have built a fake aircraft carrier off its southern coast for potential live-fire drills amid ongoing tensions with the U.S., satellite images showed Tuesday.

The apparent mock-up resembles the Nimitz-class carriers that the U.S. Navy routinely sails into the Persian Gulf from the Strait of Hormuz, where 20 percent of all the world's oil passes through.

In this Sunday, June 7, 2020 satellite photo a fake aircraft carrier is seen off the coast of Bandar Abbas, Iran.  (Satellite image ©2020 Maxar Technologies via AP)

While not yet acknowledged by Iranian officials, the replica's appearance suggests Iran's paramilitary Revolutionary Guard is preparing an encore of a similar mock-sinking it conducted in 2015.

The replica’s appearance comes as Iran announced Tuesday it will execute a man it accused of sharing details on the movements of the Guard's Gen. Qassem Soleimani, who was killed in a U.S.-authorized drone strike in Baghdad earlier this year.

The replica carries 16 mock-ups of fighter jets on its deck, according to satellite photos taken by Maxar Technologies. The vessel appears to be some 650 feet long and 160 feet wide.

The mock-up, which defense and intelligence analysts first noticed in January, resembles a similar one used in February 2015 during a military exercise called "Great Prophet 9." During that drill, Iran swarmed the fake aircraft carrier with speedboats firing machine guns and rockets. Surface-to-sea missiles later targeted and destroyed the fake carrier.

But that drill came as Iran and world powers were in negotiations over Tehran's nuclear program. President Trump unilaterally withdrew America from the accord in May 2018. Since then Iran has abandoned nearly every tenant of the agreement, though it still allows U.N. inspectors access to its nuclear sites.

Tensions ramped up to new heights last summer amid a series of attacks and incidents between Iran and the U.S. They reached a crescendo with the Jan. 3 strike near Baghdad International Airport that killed Soleimani, Iran’s top general.

Iran retaliated for Soleimani's killing with a ballistic missile strike Jan. 8 targeting U.S. forces in Iraq, an assault that left over 100 American troops with serious brain injuries. That same day, the Guard accidentally shot down a Ukrainian jetliner in Tehran, killing 176 people.