Iranians attend a ceremony celebrating the 40th anniversary of the Islamic Revolution, at the Azadi, or Freedom Tower, in Tehran, Iran, Monday, Feb. 11. (AP)

Hundreds of thousands of Iranians marched on the streets of Tehran Monday, burning American flags and taunting the West as it celebrated the Islamic Revolution's 40th anniversary by vowing to boost its ballistic missiles in defiance of U.S. efforts to curb its military.

Students, clerics and women dressed in black and carried pictures of Ayatollah Ruhollah Khomeini, the Shiite cleric who toppled Shah Mohammad Reza Pahlavi in an Islamic uprising that still haunts the West.

"Iran will continue to expand its military might and missile program," Iranian President Hassan Rouhani told the crowd who gathered in Azadi (Freedom) Square. He spoke for nearly 45 minutes, lashing out frequently at Tehran's enemies.

Iranian state TV, which said millions participated in the celebrations, ran archive footage of the days of the uprising and played revolutionary songs. It later broadcast footage showing crowds across the country of 80 million.

The six-mile-long downtown Enghelab, or Revolution, Street was decorated with huge balloons as loudspeakers blared out nationalist songs. Marchers walked down the street chanting, "Death to Israel. Death to America!" 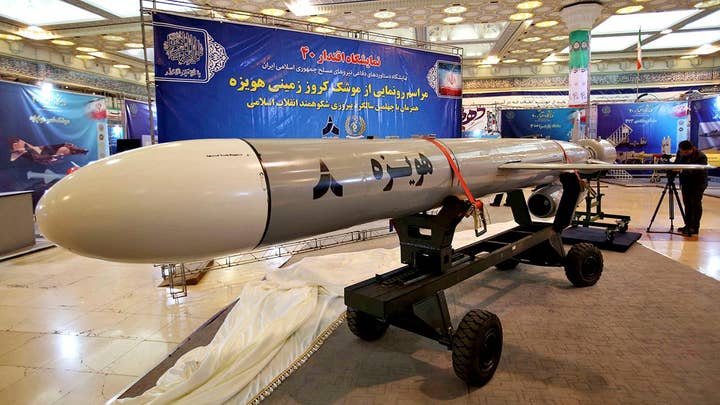 This year’s anniversary comes as Iran deals with the aftermath of President Trump’s decision in May to withdraw from the 2015 nuclear deal and restore tough U.S. sanctions.

“The presence of people in this celebration means that plots by the enemies ... have been defused,” Rouhani said. “They will not achieve their ill-omened aims.”

In the backdrop to Monday’s marches, the military displayed Iranian-made missiles, which authorities showcase every year during anniversary celebrations. The missiles have a range of up to 1,250 miles, placing Israel and U.S. military bases within range.

Over the past decade, Iran has frequently test-fired and displayed missiles, sent several short-lived satellites into orbit and in 2013 launched a monkey into space.

The ballistic missile tests have angered the United States, which fears they are part of an effort to develop a nuclear weapons capability, something Iran insists it has never sought. The 2015 nuclear agreement urged Iran to cease such missile tests, but did not forbid them outright.

“We do not and we will not ask permission for producing any type of missiles from anybody,” Rouhani said in his speech Monday, though he stressed that Iran would “continue constructive engagement” with the international community.

Rouhani also promised that Iran would overcome its economic hardships, worsened by the restored U.S. sanctions.

An Iranian woman holds an effigy of US president Donald Trump, during a rally marking the 40th anniversary of the 1979 Islamic Revolution, in Tehran, Iran, Monday, Feb. 11, 2019. (AP)

Gen. Qassem Soleimani, the head of Iran’s elite Quds Force, attended a rally in the southern city of Kerman. He is widely seen as the mastermind of Iran’s extensive military activities across the region, which have also angered Washington. Iran supports the Lebanese Hezbollah and other militias in the region, and is closely allied with Syria’s government.

Last week, Supreme Leader Ayatollah Ali Khamenei defended the “Death to America” chants, saying they are aimed at America’s leaders, such as Trump, and not its people.