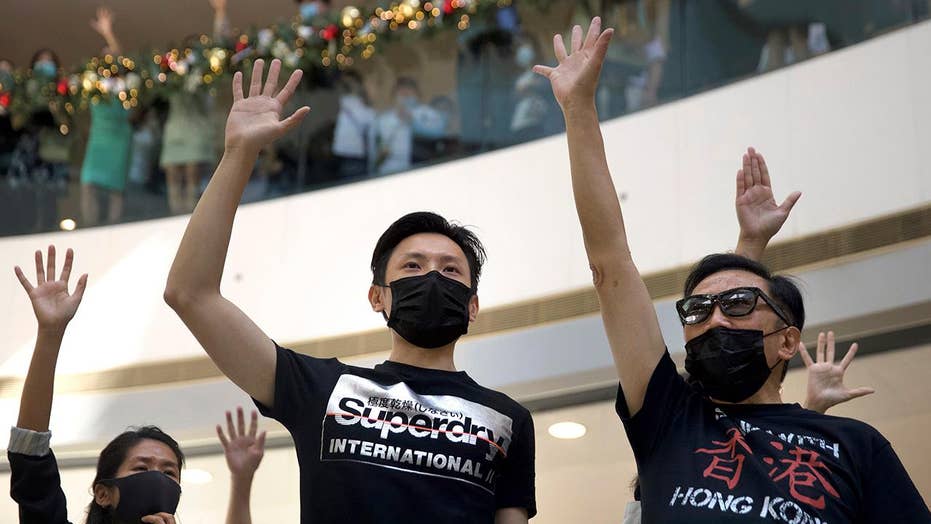 The standoff between police and anti-government protesters inside Hong Kong Polytechnic University appeared to inch closer to an end Thursday as more than 20 demonstrators left their positions to surrender to authorities.

Ten of the protesters, the Associated Press reported, walked out together and were escorted to a police post outside the campus, while three were carried out on stretchers and four taken in wheelchairs. Five other students, believed to be minors, came out with their parents and were allowed to leave after police took their details.

Protesters use clothes and helmets to form "SOS" at Hong Kong Polytechnic University on Thursday. (AP)

It is unclear how many protesters are left behind. They are the holdouts from a much larger group that occupied the campus after battling police over the weekend with gasoline bombs and bows and arrows. Some 1,000 protesters have either surrendered or been stopped while trying to flee.

Hong Kong’s largest political party on Thursday slammed the flareup in violence over the past week, urging some 4.1 million voters to use the ballot box this Sunday to reject the “black force” that has thrown the semiautonomous Chinese territory into unprecedented turmoil since June.

“The black force say they want to fight for freedom but now people cannot even express their views freely. We have even been stripped of our right to go to school and work,” said Starry Lee, who heads the Democratic Alliance for the Betterment and Progress of Hong Kong.

Lee and some candidates kicked black footballs at a campaign event in a symbolic banishing of the black-clad protesters.

“If everyone comes out to vote, Hong Kong can be restored and violence can be stopped,” she said.

The party is contesting 181 of the 452 district council seats, a low-level neighborhood election held every four years and dominated by the pro-establishment camp. For the first time, all the seats will be contested. Public anger against the government and police could give a victory to the pro-democracy bloc that would bolster the legitimacy of the protest movement.

A protester on a stretcher leaves the campus of Hong Kong Polytechnic University on Thursday. (AP)

More than 5,000 people have been arrested since the protests started in June over a now-abandoned extradition bill that would have allowed criminal suspects to be sent to mainland China for trial. The protests have since swelled into an anti-China movement as many fear a loss of freedoms guaranteed to the former British colony when it returned to Chinese control in 1997.

A 12-year-old became the youngest protester to be convicted Thursday after pleading guilty to spraying graffiti outside a police station and subway exit last month, the South China Morning Post reported. A lawyer for the student reportedly said he was remorseful and acted on impulse. The court will sentence him on Dec. 19.

Pressure has ratcheted up on Hong Kong as the U.S. Congress approved legislation late Wednesday to sanction officials who carry out human rights abuses and require an annual review of the favorable trade status that Washington grants Hong Kong. Another bill bans export of tear gas and other non-lethal tools to Hong Kong.