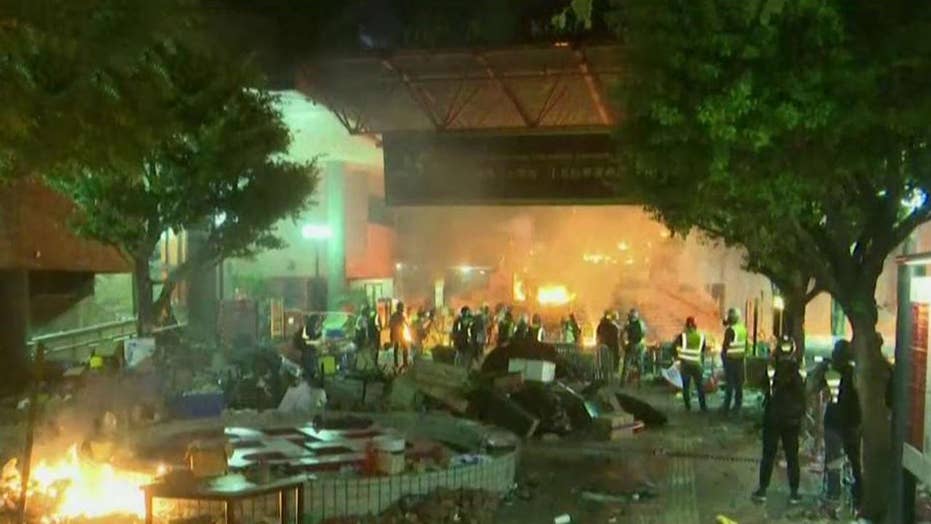 Police have threatened to use lethal force after one officer was shot by an arrow.

Hong Kong police on Monday stormed Polytechnic University where anti-government protesters have hunkered down for days amid violent clashes with police.

Fiery explosions could be seen inside the university as riot officers entered before dawn Monday. By daybreak, police had made a handful of arrests while protesters remained in control of most of the campus.

Police fired tear-gas barrages late Sunday at protesters outside the campus after an ultimatum to come out expired. The police had surrounded the university to prevent protesters from escaping as they moved in.

The protesters, numbering around 200 people, had assembled an arsenal of petrol bombs and bows and arrows to resist.

An officer from the media liaison team was stuck in the leg by an arrow around 2 p.m. and taken to police headquarters.

The protesters had also set fires on bridges leading to the university to keep police from advancing on their campus stronghold.

Orange flames extended the length of a footbridge over the roadway entrance to the Cross-Harbour tunnel.

Earlier Sunday, police had shut down access to the area and massed to surround the protesters, prompting some to retreat inside the campus while others remained outside to deter any advance.

The use of bows and arrows and catapult-launched gasoline bombs threatened to escalate the violence in the more than five-month anti-government demonstrations.

Police in riot gear prepare to fire as they move into the campus of Hong Kong Polytechnic University in Hong Kong. (AP)

“If people point their fingers at the police and play the blame game, accusing of provoking violence in universities and causing social unrest, we have stressed repeatedly that police officers are in reactive mode,” he said. “If rioters did not commit dangerous and destructive acts, there is no reason for police to respond with force.”

The initial protests were sparked by a bill that would have allowed the extradition of criminal suspects to the mainland. Activists saw it as an erosion of Hong Kong's autonomy under the "one country, two systems" formula implemented in 1997, when Britain returned the territory to China.

The bill was withdrawn, but protests have expanded into wider resistance against what has been perceived as the encroachment of Beijing, along with calls for full democracy for the territory.