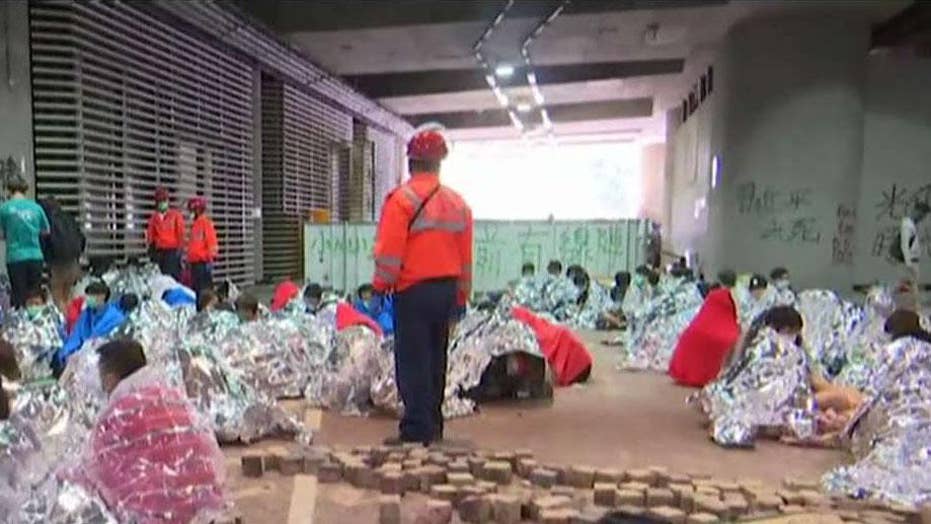 Inside the university housing Hong Kong protesters dueling with police

Fox News' Jonathan Hunt reports from the aftermath of the campus violence between students and police in Hong Kong.

The families of some of the last remaining Hong Kong anti-government protesters who are occupying the besieged Polytechnic University fear the situation could spiral into “a Tiananmen 2.0” if police move in to make arrests.

As of early Wednesday, around 100 people are estimated to still be inside the campus’ buildings, following days of clashes with police. Demonstrators have pushed back by launching gasoline bombs and firing arrows from bows.

"I'm worried when the police go in to attack there will be heavy casualties, a Tiananmen 2.0," the mother of an 18-year-old protester told the AFP, referring to the 1989 pro-democracy uprising in Beijing.

Protesters go down the steps at the front entrance of Hong Kong Polytechnic University in Hong Kong in an attempt to flee Monday. (AP)

Police are awaiting the final protesters to come out of the university buildings after some of the most intense fighting Hong Kong has seen in more than five months. Since police surrounded the university on Sunday, more than 1,000 people were arrested and hundreds of those injured in the clashes have been treated at hospitals, authorities said.

Several groups have tried to escape in recent days. One of them slid down hoses from a footbridge to waiting motorcycles but police said they intercepted 37, including the drivers, who were arrested for “assisting offenders."

A police officer prepares to fire tear gas canisters during a clash with protesters near the Hong Kong Polytechnic University in Hong Kong on Monday. ((AP))

One protester told the Associated Press on Tuesday that he had no plan and was waiting for help. Another said he wanted to leave safely but without being charged. They would not give their full names, saying they feared arrest.

“We will use whatever means to continue to persuade and arrange for these remaining protesters to leave the campus as soon as possible so that this whole operation could end in a peaceful manner,” Carrie Lam, the chief executive of Hong Kong, said Tuesday after a weekly meeting with advisers.

Throughout the day, relatives and teachers arrived sporadically to pick up the remaining protesters under the age of 18, hugging them before walking back to a police checkpoint where officers recorded names and other information before letting them go. Authorities had agreed not to immediately arrest anyone under 18 but warned they could face charges later.

At one point Tuesday, at least a dozen protesters walked out of the campus escorted by volunteers to an ambulance station to surrender. But it appeared to be a ruse, with many of them making a run for it in a last-ditch escape attempt. They were swiftly tackled by police, the Associated Press reported.

The protests started in June over a proposed extradition bill that would have allowed suspects to be sent to mainland China for trial. Activists say the legislation is part of a continuing erosion of rights and freedoms that Hong Kong was promised it could keep when Britain returned its former colony to China in 1997.