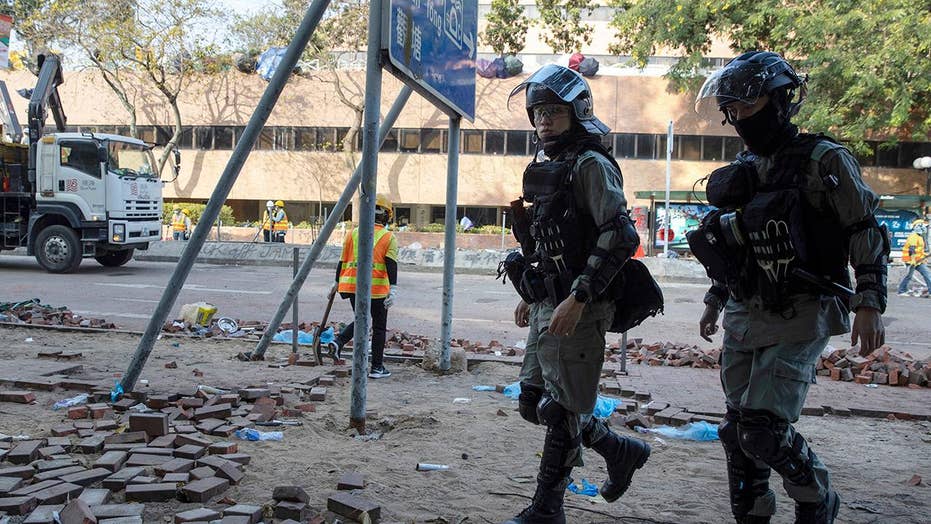 Police in Hong Kong may be planning a final operation to storm Hong Kong Polytechnic University and flush out the remaining student protesters; Jonathan Hunt reports from the scene.

Officials in Hong Kong shut down nearly a dozen railway stations Wednesday as police consider clearing out the final “hardcore” protesters who are occupying the besieged Polytechnic University.

The announcement on a Twitter account belonging to the city’s Mass Transit Railway-- which said 11 stations “will be closed to avoid possible railway assets damages due to protest and police actions thereafter” – comes as some 50 protesters remain inside the university’s campus.

“It is an indication – and the students here have been fearing this all day – that the police may be planning to storm this campus... and flush out the radicals,” Fox News reporter Jonathan Hunt, who is on the scene, said on ‘Fox & Friends’ this morning.

Police officers watch as workers clear the road in front of the Polytechnic University in Hong Kong on Wednesday. (AP)

Hunt described the remaining protesters as “hardcore," with some clad in body armor and carrying bows and arrows, baseball bats and javelins.

“If [the police] do that, they are likely to face a fight,” he said.

Hunt added that past closures of public transit in Hong Kong have “been a prelude to police action because it prevents protesters and sympathizers coming to a certain location.”

The protesters have been occupying the Hong Kong Polytechnic University campus for days and have been engaged in fierce clashes with police, who have surrounded the area.

Authorities told the Associated Press that more than 1,000 demonstrators have been taken into custody since police established a perimeter around the school on Sunday, and hundreds more who are injured are being treated at local hospitals.

The developments are happening as a former employee of Britain’s consulate in Hong Kong revealed Wednesday that he was tortured, shackled and forced to sing the Chinese national anthem during a grueling two-week period of detention in the mainland in August.

Fox News' Jonathan Hunt and the Associated Press contributed to this report.